After playing a recent clone of sub par quality, it felt good to return to an Angry Birds game proper.  While I’m not as big of a fan of the games as some, I do appreciate the accessible fun they offer, and the polish they’ve grown to show.  The addition of Star Wars made this release especially appealing to me! I debated about which version of the game to review.  While the HD visuals of the Wii U had appeal, as did the portability found with the 3DS, I ended up going with the Wii version.  Given the large installed base coupled with a lack of quality releases in 2013, I wouldn’t be surprised if this version proved to be the most popular. 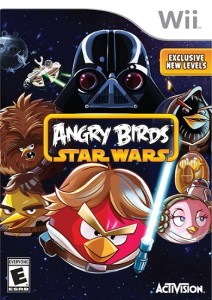 One of the main things I appreciate about Angry Birds is the consistency in gameplay.  Physics, hit detection, and overall feel remain steady, and aren’t prone to strange fluctuations or glitch like changes.  After many releases, it’s clear Rovio Entertainment has polished their craft, refining the games over several popular releases.  Series fans will surely enjoy this Star Wars entry, while newbies might consider this as an introduction to the series, as long as they can get over the price difference that consoles have over mobile devices.

The Star Wars license was the big draw for me!  With birds based on series leads Luke, Han, and Chewbacca (who looks hysterical!) and other popular characters like Obi-Wan, C-3PO, and R2-D2, there’s plenty to have fun with, and each have abilities true to their source.  Luke dons a lightsaber, Han has his blaster, Obi-Wan uses the force, etc …  The challenge comes from timing these abilities just right (often I would activate Obi-Wans force abilities too early)  Hearing a pig Darth Vader mockingly laugh at you is a good motivator to replay levels, as is earning all three stars, and gaining unlockable content. 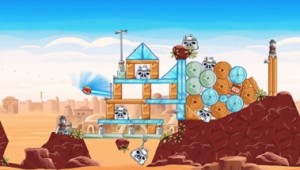 The Star Wars locations are real fun, from the opening Tatooine levels as you move towards Mos Eisley spaceport, then into space (where you have to learn successful navigation of gravity fields) and beyond.  The visuals are colorful and crisp, with fun little details for series fans.  The music is great (no real surprise) and the Star Wars sound effects score big as well.  Amusing cut scenes move the story along and they’ll make you smile and laugh.  The Star Wars atmosphere is very well represented, and has made this my favorite Angry Birds game! 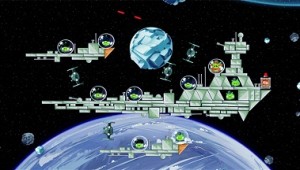 Control is well handled, and the Wiimote makes for a satisfying and unique means to fling the birds across screen.  I’ve found it to be just as enjoyable as dragging a finger or stylus across a touch screen, if not more so!  Other controls like zooming are mapped well too, and any failure can be chalked up solely to the player.  I’ve no control complaints.

The co-op gameplay is something I especially enjoyed, and is great fun!  Being able to tackle the levels with a friend is always enjoyable, and the puzzle gameplay seems well suited to it.  I’ve found that when alternating between birds, it allows viewing the puzzles in a different light (if that makes sense) and being able to bounce ideas between you and a friend can lead to some clever solutions.

Angry Birds popularity doesn’t seem to be going away anytime soon, and Star Wars popularity already spans decades.  The combo makes this seem like an ideal release, although the price could give pause.  This Will version is $40, which is in between the $50 Wii U version, and the $30 3DS one.  Honestly, all the versions are overpriced, including those found on non Nintendo consoles.  There are some exclusive new levels though, and the proven gameplay hasn’t lost any of its fun factor.  Whether you pick up Angry Bird Star Wars as your Wii swan song, or grab it for a current Nintendo system, you’ll surely a good time.  I did.