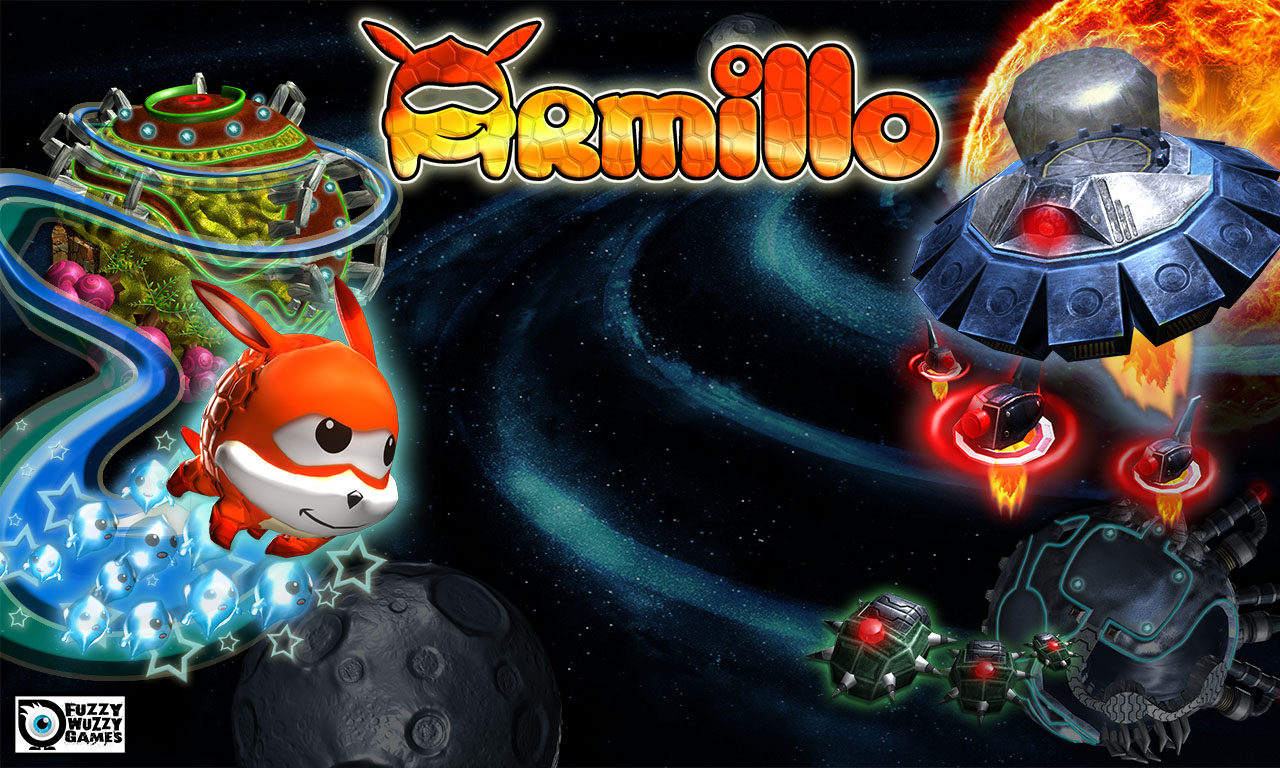 I have to be honest, when I first saw Armillo in development some time ago I wasn’t very impressed with the game.  A few months prior to release I played a PC build of the game and I was convinced that Fuzzy Wuzzy Games had something good.  Now that I have had some time with the Wii U version of the game, I am very surprised with the quality of Armillo.  This puzzle platformer is an absolute blast to play and almost every element of the game is designed very well.

During this review of Armillo I will not talk much about story because it is easy to spoil what happens in Armillo by talking to much about it.  Basically the player gets an idea for the entire game’s story within the first set of levels.  Armillo is trying to save his brother and other critters from the evil Darkbots.  That is it, I will say no more.  I know a little underwhelming but I guarantee you that there is much more to the story then that and you’ll have to play it to get any more.  I was impressed that an indie game had such a deep story.  Some indie games focus on gameplay so much that there isn’t even a story at all.  So I was pleasantly surprised to have such a well thought out story in Armillo.

One of the only aspects of Armillo that was not overly impressive to me where some of the menu graphics like those found in the ‘Critter Corner’ and the character’s dialogue boxes. I felt like these didn’t stand up to the same quality as the rest of the Armillo’s graphics.  Other than that, the levels look fantastic and you will be hard pressed to find any two levels that look the same.  Each level has it’s own design touches and gameplay mechanics.  There is not very many variations on enemies found in the levels but the variety of enemy character is broad enough to keep things interesting.  Occasionally a new obstacle will pop up every now and then but for the most part enemy encounters are the same throughout.  Boss battles are changed up throughout the game though so don’t think you’ll get off that easy.

The audio in the game is quite incredible too.  The sound design in Armillo is great and whether players are rolling around the levels or bouncing off of an obstacle, there are very few moments when players will not have any audio queues of some sort.  There are also unique musical tracks for all the levels and are styled to match the level’s design.  Another impressive feat for a small indie developer’s first game.  The varied music between levels also kept the game from getting to boring or monotonous.

Keeping Armillo interesting was likely quite a challenge for Fuzzy Wuzzy Games, as there is quite a bit to unlock and explore within the game.  Not only are the normal 3D levels fun to explore and may sometimes require more than one go to collect everything or reach gold status,  there are also secret 2D platforming levels to discover.  These 2D platforming levels are only unlocked by finding them within each normal level of the game.  Additionally, players will need to complete at least one of these secret levels to advance onto the next set of levels in the game.  Many will find that some secret levels are a lot harder to find than others and players will likely spend some time replaying prior levels if they want to unlock all of them.  Fortunately, I have never found myself having to back track to find a secret level so that I can advance in the game, but some players may run into this issue.

When all is said and done, I am very glad to have played Armillo on the Wii U.  It is a very well made 3D puzzle platformer created by such a small indie developer.  I would encourage anyone looking for a good adventure game to give Armillo a go.  There is enough content in the game to keep players entertained for hours and then some, especially to unlock all the content in Armillo.  Most players will likely have to play Armillo more than once through to see everything the game has to offer.  It is definitely worth the money not only for the content but the quality of the game as well.