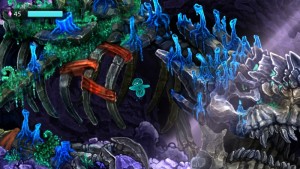 Beatbuddy is an action-adventure game which takes place through gorgeous hand-painted locales.  I might go so far as to say the captivating visuals are the biggest draw, yet the music is persuasive as well.  More than just a mere soundtrack, the tunes put new life into these environments.  So much moves to the beat of the music, a sense of rhythm can genuinely make certain parts of the game easier. 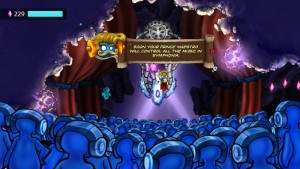 The plot is thin, but sufficient.

You journey through Symphonia, where someone is out to control the populations sustaining lifeblood, music.  It’s a fairy tale in a watery dreamland, but one that’s not overly explained.  There’s no story found in the meager manual.  The thin plot expounds in-game only, initially through narrated notes – later dialogue lacks speech making for an odd inconsistency.  Overall it’s clear the focus was on gameplay, not plot. 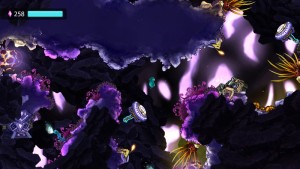 Navigating the titular Beatbuddy through this underwater world, you’ll see multiple pathways blocked off.  Puzzle solving allows these smaller areas to open up, and finding ways to break down walls or unlock gates brings early enjoyment.  Unfortunately these tasks do get rather repetitive the more you’re required to do them.  Some of this stems from the limited mechanics, expanding too slowly for their own good.  Pacing is also a factor, one that I’ll expound on shortly. 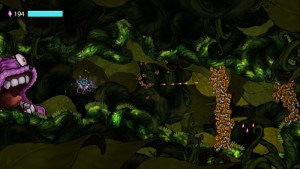 Avoiding dangers from various creatures and environmental threats is also a must.  At times you’ll drive a beatbuggy vehicle, and though it’s shooting ability can make it easier dealing with foes, the clunkier, slower nature doesn’t make it a favorite of mine.  Still, it tries to supplement something of a medley of gameplay.  And even when certain tasks bordered on tedium, Beatbuddy managed to hold my interest until the end, dearth of ideas and all.  Again, a large part of that derives from the visuals. 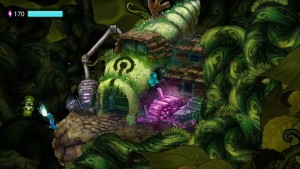 I admit, I’m a sucker for hand-drawn art, but Beatbuddy is truly gorgeous!  Clichéd as it may sound, these screens really don’t do the game justice.  My desire to see each of the six worlds was driven by just how detailed and vibrant the presentation is.  The visual effort and impact simply cannot be denied, and is greatly appreciated! 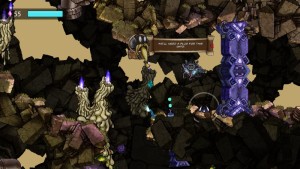 The text is so small … why?

Having said that, there’s room to improve.  At times the camera’s zoomed out so far, it can be tough determining amongst the layers what’s interactive versus just scenery – this also makes some text queerly minuscule. Occasional stutter, albeit minor, is another observable issue.  My biggest visual downer comes from the sorry use of the GamePad.  While there’s  no shame in not finding a unique use for the Wii U’s controller, in cases like these mirrored play is a must.  Simply displaying redundant character animations amidst a black backdrop is not only meaningless, it’s a rather distracting waste. 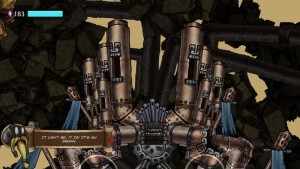 Music worth buying the soundtrack for.

I’ve already touched on the music some, but I’ll reiterate, Beatbuddy carries excellent sound design.  Here’s a game whose soundtrack I’d consider buying!  Even when I thought some tunes might be a little far-out for my tastes, the quality continued proving itself remarkably high.  The eclectic variety even has occasional vocals.  Perhaps one potential detriment could be repetition due to level length, which ties back into pacing. 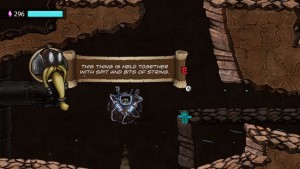 Some unfortunate glitches hold things back.

While this game has reasonably sized chapters, the levels themselves are quite long.  The fist one alone (something of a tutorial) took me nearly an hour!  It made backtracking stand out more, and the commodiously bounded gameplay border on stagnation at times.  The otherwise stellar audio-visual presentation  briefly flirted with becoming too familiar, bogged down in overworked mechanics.  The occasional odd glitches certainly do no favors either, especially one that forced me to reset an entire level late in the game!  Encouragement is given to replay, with info displaying how many collectible beatpoints were missed for instance (plus some unlockables) but I question if this is the sort of game you’ll want to come back to immediately. 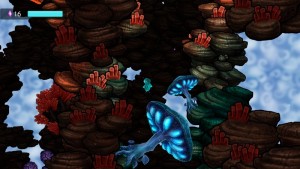 I found Beatbuddy to be uneven in degrees, but nonetheless, it proved a very cool game.  It’s visual style is such a breath of fresh air amongst indies, with top-notch sound design to boot!  How much do these things mean to you?  The answer to that question might determine if this is a game to buy now (at the launch price of $8.99) or one to wait on for a sale.  Until the bugs are sorted, a wait surely isn’t unreasonable.  Nevertheless, I absolutely believe this a game worth exploring, especially with post-launch DLC in the works.

I found Beatbuddy to be uneven in degrees, but nonetheless it proved a very cool game.