Bravely Default is a title that marks a foray into both the old and the new for the RPG powerhouse Square Enix. With their flagship Final Fantasy franchise continuing to divide enthusiasts of the long time series with its direction, many fans have yearned for an experience more akin to the Golden Age of Role Players. With that in mind, Square Enix have placed their faith in their newest franchise, Bravely Default, which sees the developers truly going back to their RPG roots.

The tale follows four unlikely heroes whose coming together is foretold in a mysterious journal. Each of the main characters have their own unique reasons for joining the quest, but ultimately join Agnès Oblige, the Wind Vestal to aid her on a mission to awaken four crystals and remove the darkness that has engulfed the land as a result of the Eternian Force’s Anticrystalis movement (no, I haven’t made that up). Each of the four main characters are brimming with personality and each has their own unique make-up, with the suave and often womanising amnesiac Ringabel being the highlight of the bunch. The storyline may not be the most idiosyncratic plot we’ve ever seen, but just like the Final Fantasies of old it need not be in order to excel as a gaming experience. 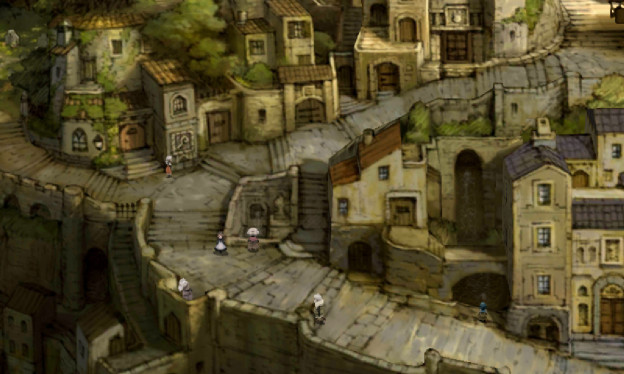 Bravely Default originally began development as a sequel to the DS’s Final Fantasy: the 4 Heroes of Light but eventually manifested into its own unique title. Building upon the foundations laid out by its spiritual predecessor, Bravely Default maintains the very traditional RPG sentiments that came to define the series of whose franchise name it dropped. Like the classic era of Final Fantasy, your quest involves visiting majestic kingdoms, reawakening crystals and fighting an array of quirky enemies along the way. All this plays out against a stunning backdrop. Like the aforementioned 4 Heroes of Light, Bravely Default features a wonderful hand-drawn art style which evokes the sensation of playing in a living work of art. As soon as the game begins, leaving the controls idle for a few seconds causes the camera to zoom out, revealing the city of Caldisla in all its artistic glory. It’s the awe inspiring moments like this that further envelope you into the world of Bravely Default. The stereoscopic 3D is impressive at times too, most notably in the town of Ancheim with its many streets and staircases spanning both the background and foreground.

Bravely Default does retain some of the gameplay mechanics of 4 Heroes of Light and other past Final Fantasy entries, such as the Job System which allows Asterisks gained from defeated boss fights to change your party member’s job and resulting abilities, as well as a newly added secondary Sub-Job. The Bravely Default battle system freshens up the age old formula of turn based battles. Choosing to use the “Brave” option in a battle allows you to stack up moves, effectively allowing you to perform up to four commands at a time. This can be extremely helpful in testing situations and can effectively increase the chance of KO’ing an opponent before they even land a hit. However, the Brave system comes with consequences, performing a multiple of “Braves” removes an equal number of “Brave Points”, meaning that your member must wait for their BP meter to return to neutral before being able to carry out another command. During this time you “Default” your turn. Players can also chose the “Default” move voluntarily, meaning they can stack up BP’s for when they’re required, or use them for certain skills that require more than one BP. Defaulting also acts in the same way as “guard” would in your traditional RPG, raising your member’s resistance against attacks. The Bravely Default system is a simple enough addition, but results in random encounters feeling far less of a chore. You won’t find yourself monotonously mashing “Attack” in Bravely Default. Instead, a whole new layer of strategic thinking is added to each fight, making you stop in consideration of your moves and what effects they may have in the overall outcome. 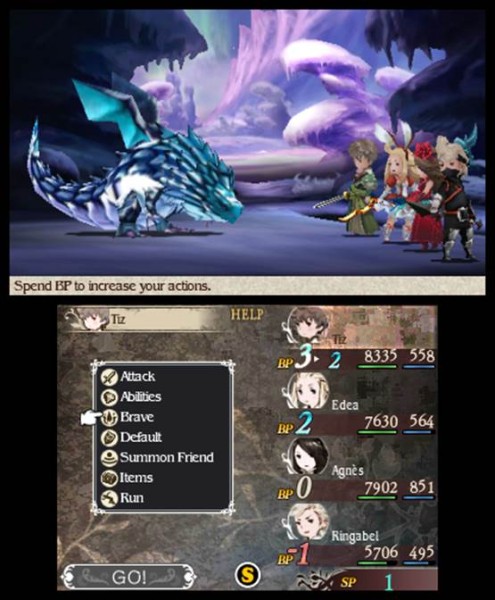 The Bravely Default system is a simple enough addition, but results in random encounters feeling far less of a chore

The “Brave” and “Default” moves aren’t the only new features in battle. Now, as well as summoning great deities, friends registered in your 3DS list that have played the game can be summoned to aid you in battle, using one of their own uploaded attacks. As well as registered friends, strangers encountered over StreetPass can also lend a hand when you’re in desperate need of aid. However, those seeking more of a challenge in the game should be cautious when summoning, as conjuring the warrior of a friend who is progressively further into the game than you can result in their higher level obliterating a boss in a single attack, rendering the battle effortless. 3DS StreetPasses not only play a role in battles but also aid in a side quest of the game where you are tasked with restoring party member Tiz’s village of Norende. “Sleep Potions” are another new feature of Bravely Default, and can also be used to briefly stop time in battle, allowing you to carry out a barrage of attacks, unchallenged. Sleep points are gained by leaving the 3DS in sleep mode, with every 8 hours of standby mode resulting in one Sleep Potion. For those especially stuck, Sleep Potions can also be purchased using real life currency. This is sure to get alarm bells ringing amongst those firmly against micro-transactions, however, the need to actually purchase extra Sleep Potions is likely to never arise, especially with the deluge of other aids and difficulty diminishing settings available to players.

With so many assisting features, one may be given the impression that Bravely Default is a facile experience. However, it should be noted that the customisation in Bravely Default is staggering, allowing you to literally tailor the game to your own preference. Difficulty and encounter rates can be turned up or down at any point of the game allowing especially onerous sections to be bypassed. Although RPG veterans may sneer at the notion of fiddling with the challenge of the game, turning up or down encounter rates is a great way to level up quickly, or avoid re-fighting hoards of monsters when backtracking or revisiting caves and dungeons. The ability to turn the games challenge as high or low as you like results in a sufficiently formidable conquest for the more accomplished RPG player, whilst encouraging those new to RPGs to delve into the genre for the first time. 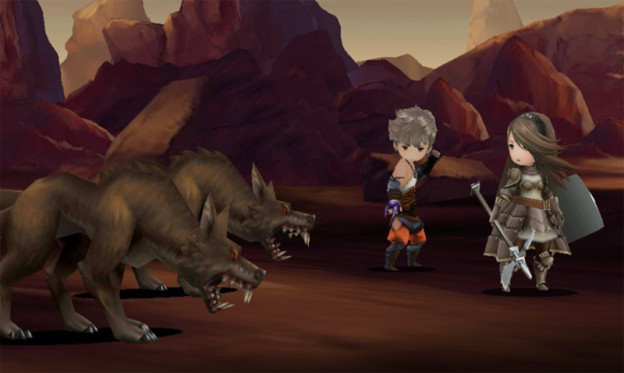 Turning up or down encounter rates is a great way to level up quickly, or avoid re-fighting hoards of monsters when backtracking

For all of Bravely’s amazing achievements in gameplay, one must not overlook the astounding audio quality of the game. The dedication Square Enix devoted to the voice acting is admirable. Being a title released solely on a handheld system, one may expect voice acting to be reserved for cutscenes or the occasional key events. However, the majority of the dialogue in the game is masterfully dubbed by extremely talented voice artists. The deliveries can occasionally be a little melodramatic, but it is in keeping with the pantomime nature of some of the characters and only adds to each one’s unique personality. Bravely Default, is a game that definitely does not take itself too seriously, and you’ll find yourself chuckling away at the interactions between the four heroes and other lines of dialogue here and there. Revo’s soundtrack perfectly accompanies the game’s gorgeous visuals, leaving you with a feast of the senses. Drawing heavily from traditional Celtic and Mediterranean genres with enough rousing rock pieces to get your into a battle mood, the music resonates with you in a way that leaves you humming the melodies hours after you’ve closed your 3DS.

As Final Fantasy evolves and deviates from the mold that it originally crafted for itself, Bravely Default instead sees a welcome return to the type of role playing adventure that Final Fantasy once excelled in. Bravely Default is a wonderful concoction of both old and new, maintaining everything loved by the classic Final Fantasy games whilst adding enough fresh new features and mechanics that could ultimately result in Bravely becoming Square Enix’s new trump card. Bravely Default’s luscious visuals, rich cultural sounds, colourful cast of characters and addictive gameplay all culminate to produce one of the best RPGs not only from Square Enix, but from any publisher in recent years. If your faith in Square Enix has been tested in recent years, Bravely Default should do a great deal to restore that concern.