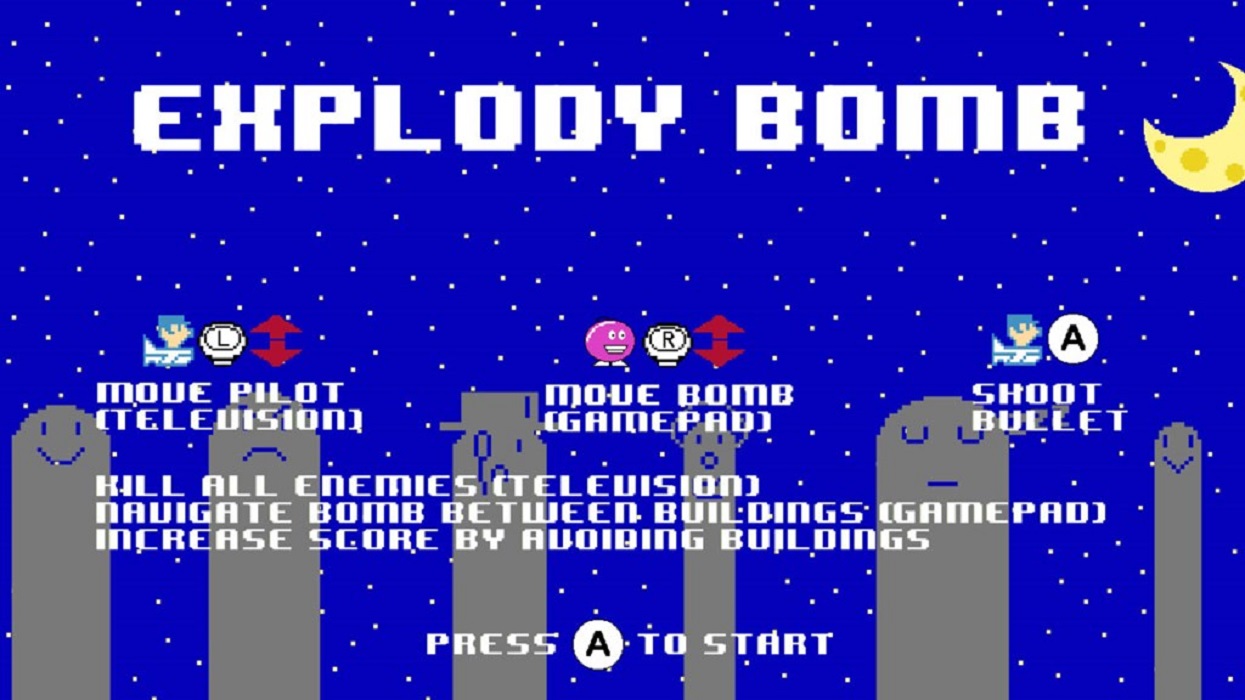 ‘A challenging score buster that combines the mechanics and difficulty of Flappy Bird with traditional arcade space shooters.’

Frustratingly difficult would be more accurate!  With a very weak inspiration source for a console game, Explody Bomb has its work cut out for it from the outset.  Once you test the discouraging gameplay … sigh.  Disingenuous descriptions certainly do no favors either – how many “traditional space shooters” do you know that are limited to just a single bullet on screen? 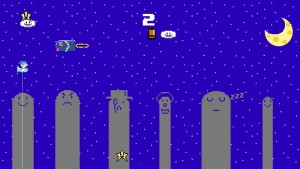 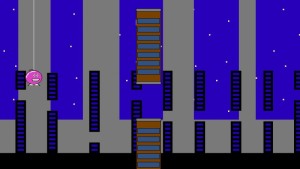 What makes the gameplay so unpleasant is the poor setup.  You control a pilot on the TV with the left control stick, while maneuvering a bomb on the GamePad with the right one.  This unavoidably disjoined focus isn’t practical, and would’ve been more appropriate as a single screen (or possibly 3DS) game.  In this instance the GamePad use sadly proves a big hindrance.

As if the two flying tasks weren’t enough you also have to shoot down enemies, a function uncomfortably assigned to the A button – there’s two trigger buttons that could’ve been used to work in tandem with right stick!  When you miss even a single enemy the game abruptly ends.  Stars can’t be shot, but are still deadly to the touch regardless.  Less would’ve been more here. 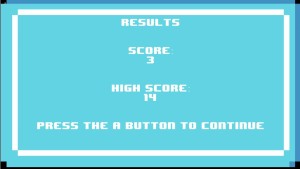 On Miiverse the dev has admitted “I am bad at my own game!”  That should tell you something.  It demonstrates a continued risk, when inexperienced indie devs are obsessed with such high levels of difficulty.  In this case, it failed.  Your scores will be very low.  Only a single point is earned for passing buildings.  Shooting enemies nets you nothing.  Points can’t be used towards unlockables, or any extras.  All you can do is share scores on Miiverse, as there’s no local leaderboards.  The Miiverse community for this game is an interesting mix of spam posts and considerable code giveaways.  Check the community for unclaimed codes if you’re curious.

Explody Bomb has just a single mode.  There’s no settings for the challenge, no change in scenery, etc.  To say the content is thin is putting things quite mildly.  There’s little if any substance for what is there, sadly making this ordeal monotonous to a gross degree.  You’ll see all there is to see in just a few minutes and I truly doubt you’ll want to come back to it, especially with such awful aesthetics.

I won’t dwell on the graphics too much.  But these archaic visuals suffer from dull design, with small characters, and a poor font.  The enemies especially are unappealing and very forgettable.  There is no music at all, just shrill sound effects that add nothing.  Check out some footage to see this audio/visual package for yourself.  Even budget indie titles can do better than this, and certainly have time and again! 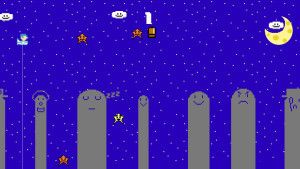 It’s worth noting that playability increased when we tackled this game as two, although this is certainly not the intended design.  I had my wife control the bomb, while I focused on flying and shooting.  Suited for co-op, the fact that a proper multiplayer setup’s not included is just plain baffling.

Explody Bomb being released in its present state suggests it was rushed.  Proper play testing surely could have identified and fixed several of these problems.  Even then, this is a game that’s flawed on a conceptual level.  The GamePad use is decidedly not fleshed out.  Forgive the pun, but I really don’t see how this design will fly with Wii U gamers. 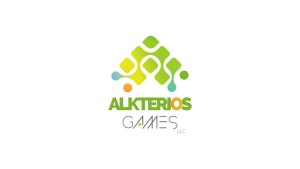 For Alkterios Games, there’s nowhere to go but up.  I hope they don’t get overly discouraged.  By taking the public’s negative reception in a constructive manner, I do believe they can overcome some of these numerous deficiencies.  Hopefully their next Wii U project (due any week now) will be respectably improved.  For now, skip Explody Bomb.  Even at just $1.99 it’s a very bad game, and personally one of the worst I’ve played on the eShop.

(I was unable to find any gameplay footage from the developer, so please enjoy this video courtesy of our friends at Seafoam Gaming)

Even at just $1.99 it’s a very bad game, and personally one of the worst I’ve played on the eShop.