GEOM is a very basic puzzle game from Andraconus and is available on Wii U at the low price of 99 cents.  This budget puzzle game is very easy to play and uses the GamePad’s touchscreen almost exclusively.  There are three game modes, which are all timed, and each provide a different experience using the same tiles.

GEOM’s three ‘Game Modes’, and yes they are actually labeled simply Game Mode in the game, are as follows.  Game Mode 1 has players swapping tiles similar to a Match three type game but with a different take.  In Mode 1, if players can match more like tiles together before swiping through them, then more points will be awarded.  Game Mode 2, players will be selecting tiles from the grid that match the shape that is displayed until the grid is cleared and repopulated with new tiles.  This process is continued until time runs out.  Game Mode 3 scrolls random tiles up the touchscreen and players are tasked with tapping tiles for points.  The shapes are given different point values so picking and choosing which tiles to tap is important in this mode.  In all of the Game Modes, more points are added for using/collecting the special Moon/Sun tiles than other tiles.

Overall, the graphics, music, and sound design is mediocre.  The sound effects are the same across the board and get boring after long periods of play and the musical tracks are limited so the looping of the few available tracks also gets quite repetitive.  GEOM is quite simple to play and using the same shape and color combination of tiles between each Game Mode makes it easy to jump from one mode to another with little to no adjustment needed.  High scores are tracked but Miiverse is not implemented within the game, so the high score posts on Miiverse look a little odd.  GEOM definitely could have benefited from having a built in Miiverse post feature. 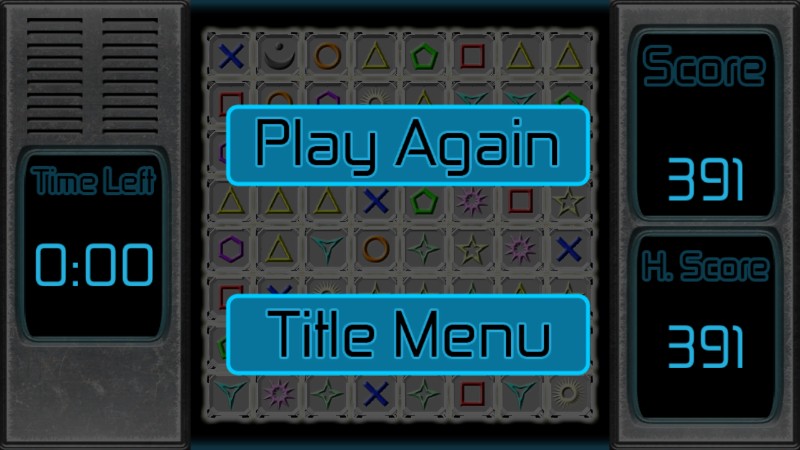 GEOM is definitely a budget game and is priced at such but it is only engaging in small doses.  It is a good time waster at an incredibly low price.  While GEOM is a good way to waste some extra time, there are better puzzle games on the eShop and GEOM seems like it would feel more at home on a phone or tablet device.  Not that having cheap mobile or casual style games on the Wii U is bad but it muddies up the eShop with ‘shovelware’ and can distract consumers from more quality titles.  GEOM might be a good choice for more casual or younger gamers but I would discourage the hardcore crowd from even trying GEOM and would recommend something like Blok Drop U instead.