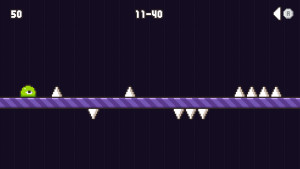 Like the recently released Don’t Crash, Pixel Slime U you is another basic HTML5 game licensed and ported to the Wii U by RCMADIAX.  I didn’t care much for the last game, and I’ve mixed feelings on this one as well.  The goal of this difficult auto-platformer is to get the lowest score possible through 40 small levels, with each failure increasing your score by one. 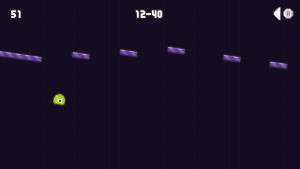 This game nearly made me ill the first time playing it.  Movement is rapid, and can be rather jerky.  At times the camera totters as if bobbing in the wind.  Certain levels flip back and forth, or spin around.  These and more are possible dizzy, headache, or nausea risks.  The game’s overall brevity, plus the fact it saves progress, provides compensation.  Actual level designs could stand being more interesting.  A few are merely trivial variations of previous ones.  The latter are trial and error, as you hope for bulls-eye timing with pixel-perfect jumps, while slowly learning layouts.  It can begin to aggravate, but ends before truly driving you up the wall. 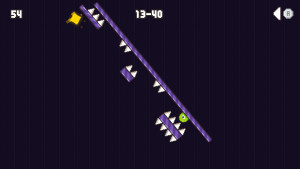 Visually there’s not much to see in this basic presentation.  The green slime jumping across the mauve platforms provides a slight touch of color against the dark, plain, background.  The audio makes out similarly.  The single music track is initially enjoyable, but long pauses between the tune ending and restarting stick out.  The music can be turned off if it gets too repetitive, but this also mutes the sound effects. 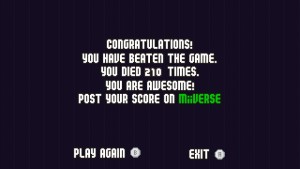 Regrettably no major additions were added in the porting process.  If you use Miiverse it can tack on a small replay element, if you’re looking to compete with others who’ve beaten the game.  And RCMADIAX is a fairly active Miiverse dev, which is laudable.  But lack of even a local leaderboard hurts, as it would’ve been an incentive to continue trying to improve your score. 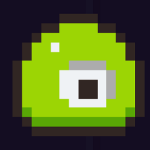 Sad to say, I didn’t enjoy Pixel Slime U very much.  There was some mild satisfaction from beating it, but  I doubt I’ll return that often.  The game’s currently selling for $2.99 on the eShop.  While that’s inexpensive, the full game can also be played online for free.  Pixel Slime U just doesn’t have the content, length, or replay value to justify such a price.  I suggest waiting for the inevitable sale.  I also hope this is the last of the HTML5 ports.

There’s several titles from RCMADIAX that are better than Pixel Slime U, so be sure to check them out first if you haven’t yet.