Professor Layton first graced the Nintendo DS back in early 2008, and since then the Professor has come a long way. In those 5 years, the Layton series has spawned five sequels, an animated movie, and countless spin-offs. But like all good things, the series must come to an eventual end, and regrettably Professor Layton and the Azran Legacy is the last true adventure in the Layton legacy.

Professor Layton and the Azran Legacy’s story is far more grandeur in comparison to the previous entries. Where other adventures saw Layton solving mysteries in quaint towns and villages, the Azran Legacy sees Layton, Luke and Emmy jetting off on an around the world trip that would leave the likes of Phileas Fogg in awe. Joined by their newest sidekick and fellow archeologist, Professor Sycamore (not to be confused with the Pokémon professor), they set off to study the mysteries that shroud the ancient Azran legacy, in a puzzle which is far too great for Layton and Sycamore to resist. Their quest takes them to a slew of new and exciting locations, from the snow peaked mountains of Froenberg to Phong Gi, a small village hidden deep in the heart of tropical jungle. 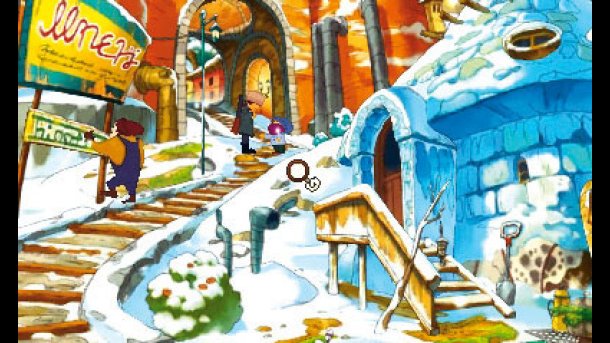 Many of the updated gameplay elements which helped transition Miracle Mask from the DS to the 3DS have been left present. For example, players no longer click on a static background to find puzzles, hint coins and other inter-actable items, but instead, locations are presented in full 3D, allowing players to scan the environment with much greater scope. Instead of tapping away at the system with your stylus, the player must guide a magnifying glass around the lower screen to investigate, and occasionally “zoom” to see a particular area in greater detail. This system presents the game’s locations in a much more attractive way. Clouds roll by overhead, woodland creatures scurry around underfoot and vehicles drive by in the distance. This all helps to bring the locations and backdrops to life in a way seldom seen throughout the series. In comparison to the straightforward tap-fest found on the DS instalments, the new investigative system feels cumbersome and over complicated at first, but in time, the method becomes second nature and helps improve the overall experience.

The Azran Legacy is no exception when it comes to the the notoriously tricky brain teasers of the series. This final instalment further establishes itself as a game prominently for adults, and those playing will often find themselves perplexed right from the get go. However, the abundance of hint coins found throughout the adventure compensates to those having a tough time, making the Azran Legacy a title that can be enjoyed by all. The Azran Legacy features over 150 new puzzles with even more available via DLC. There are instances when puzzles can become overly familiar, leaving you with a case of déjà vu, but that can be forgiven for a series that is so heavily centred around conundrums, and with five previous entries. For the most part though, the puzzles feel fresh and engaging, especially with the updated 3DS style of presentation, with many puzzles featuring responsive animations on the top screen that react to your actions on the touch screen below. 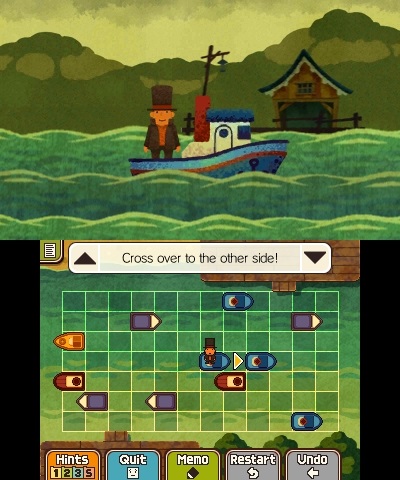 The full extent of the final entry being the most large and elaborate Layton yet is both beneficial and detrimental to the game. The Azran Legacy often feels congested, and as a result, the game isn’t quite as comprehensible as previous titles in the series. The vast amount of locations and cameos from previous instalments of the series leave the game feeling a bit unnecessarily bloated, and the story isn’t quite as straightforward as a result. However, with the immense variety packed in, it’s difficult to become bored, as you’re regularly being whisked off to new destinations. Each location is only briefly visited though, and these segments do not take very long to get through. This leaves the Azran Legacy feeling a little disjointed and more akin to episodic mini adventures as opposed to one overall branching storyline. The player is granted the option to tackle each location in whichever order they choose, which is a nice ability, and does not hinder the flow or chronological advancement of the game’s plot.

Now a trademark of the series, Azran Legacy is once again brimming with content. Now, even more so than ever, the puzzles feel overshadowed in comparison to the huge variety of mini games, and other tidbits found on the game’s menu. The mini games are much more extensive than they have been previously. “Nut Roller” sees you in charge of a squirrel who must roll his acorns through various mazes and obstacles, and Blooms & Shrooms leaves you all green fingered, with the task of intricately planting flowers in order to restore floral bliss to gardens. Both of these mini games are more arduous than enjoyable and are likely to only be fully completed by perfectionists or those with plenty of time on their hands. The most enjoyable mini game, “Dress Up”, sees Layton & Luke swapping puzzle solving for fashion designing, creating “tasteful” outfits, with hilarious results. Dress Up is surprisingly challenging despite its face value, with each ensemble having certain requirements than need to be addressed. 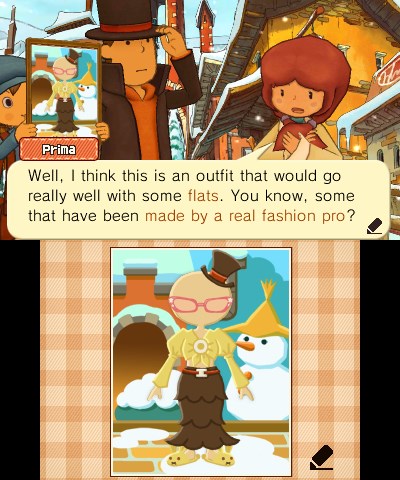 “Episodes” return once again, offering extra pieces of backstory and “Collection” which stores artefacts found from your worldly destinations. “World Times” is a new feature, offering short Newspaper snippets regarding various events. Both “Collection” and “World Times”, unfortunately, offer very little other than collectables for those wanting to complete the game to its fullest. If these features weren’t enough, there are 365 additional puzzles, one for every day of the year, available via DLC. The Azran Legacy also utilises StreetPass with a special “Treasure Hunt”, making use of special items found throughout the adventure that can be used to send challenges to others. Completing these puzzles results in special rewards. With further unlockable challenges, and exclusive post game content, the game is certainly bursting with features, making it exceptionally good value for money.