By J. Casalino, who thinks that SMB3 might just be the best game ever created.  Next to Metroid Prime. Or maybe one of the Zelda games.

Whenever I see a game with “The Perfect Party Game” or something similar printed right on the cover, I have to wonder whether this is genuine or simple marketing fluff.  In the case of Rabbids Land, it may be a tad more of the latter than the former.

My first experience with Rabbids Land didn’t get off on the right foot. After starting the game you are presented with a very animated Jester Rabbid and a main menu.  You have options to go to Board Game/Trophy Race mode, or one of two Mini Game modes – Treasure Hunt or Free Play.  You also have the Ubisoft uPlay button, Options, and Extras. 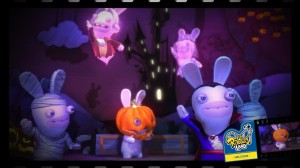 I chose a single-player Board Game with a 10 trophy limit.  Instead of choosing different icons or characters, like you might see in Mario Party or another board game type game, everyone gets to be a Rabbid.  However, I never got that far.  My Wii U console immediately locked up with the terrible WiiUvuzela sound, and I had to unplug the Wii U console.  I recorded a second WiiUvuzela incident in Rabbids Land and captured it to video here: https://www.youtube.com/watch?v=OwoxpV3SHkA&feature=plcp

After resetting and restarting the game, I was successfully able to choose my Rabbid character and paint it a lovely shade of blue.  Then computer chose three other Rabbid colors at random, and we were off.

Within board game mode you are presented with a double-concentric ring of tiles.  Everyone starts in the center.  The goal is to make it around the ring and back to the center after you’ve achieved either 10 or 20 trophies, depending on what you selected at the beginning of the game.

Several tile types exist and repeat their way around the board. You roll a 6-sided die to pick your destination, either on the inside or outside ring.  You can only cross between the rings where a bridge exists. 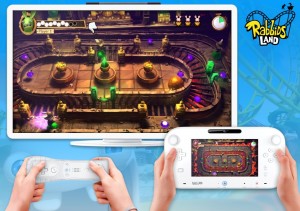 There are mini games, jackpot squares, event squares, and present squares in addition to event squares and “bad” squares.  The most common on the board are the mini games, as these are the focus of the game.  The others just make it easier or more difficult to gain the required number of trophies to win.

As you move around the board, the bridges between rings also move around.  This makes it incredibly difficult to actually win a game once you’ve earned the required number of trophies.  It also virtually guarantees that the person who first gathered all the trophies will not win the game.  In my experience, there are still at least five turns left before you can make a run for the center even if you have all the trophies you need to win. I wish there was a mode where I could set “first to 10 wins” regardless of whether or not I make it back to the center circle.

Because of this, Playing Board Game mode as a single player was one of the most unpleasant gaming experiences I’ve ever had. I had very little idea of what was happening because I couldn’t see what was happening when the computer randomly chose to play itself in the background.  More often than not, you’ll just be waiting around for the computer to finish its 3 turns, pounding your fist into your skull wishing you had the Turbo button on your NES Advantage and wondering when this grueling experience is going to end. 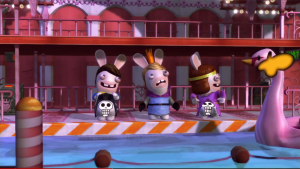 Fortunately, the mini games are actually pretty interesting and may be the single redeeming factor of the game. They are all very different from each other.  I never felt like I was playing a different version of the same mini game with only a couple of changes in rules to make them “different.”  All of the games I was able to play were for two people working against each other in one way or another.  Some were more fun than others, and some seemed outright impossible or weighted for one player more than the other.

My favorite mini game reminded me of Marble Madness or Super Monkey Ball where one player rolls around a large marble attempting to crush the other player’s smaller marbles.  The goal is for the player with the smaller marbles to collect all the jewels in the level before they are crushed. Lots of fun and cursing occurred when my wife and I played against each other.

Once you’ve played a mini game in Board Game mode, it unlocks it for single-player play in Treasure Hunt mode. In this mode, you play the same mini games but coins appear in various places around the game. It was interesting that for some reason Ubi found it necessary to make the aforementioned small tweaks to the same game in a sad attempt to make these games “different” or more difficult (they’re not) and justify you replaying the game for more coins.

Within each level of difficulty, you can collect up to three coins similar to the star coins in Nintendo’s Mario franchise. As you collect coins, videos are unlocked in the Extras section.

You will also find the exact same mini games available to you in Free Play mode, if you don’t want to jump into a full Board Game but just want to challenge a friend.  This mode is marked for two players, although I’m sure you and your friends are smart enough to figure out how to switch controllers just like you do in Board Game mode.

In Extras, you’ll find Videos and Music sections. The Videos can be unlocked in the game, but it appears you can only unlock Music by earning Uplay credits.

Videos are prerendered skits of 10-15 seconds. They are truly hilarious. I can only imagine how much fun the creative team has when setting up the Rabbids for hijinks and coming up with storylines of silly things Rabbids can’t do.  The videos unlocked within Treasure Hunt mode are longer and make allusions to how Rabbids have directed our future throughout history, using a time-shifting washing machine.  You know, small things like Columbus’ discovery of America. Doctor Who fans, prepare for slapstick comedy. Ubisoft, if you’re listening, you NEED to have the team responsible for these videos create a movie. It would probably beat Toy Story for opening day ticket sales.

One thing I didn’t realize when I was playing as a single player with the GamePad was that even if you have 4 Wiimote and Nunchuk combos for multiplayer, only the Wiimote attached to Player 1 is active in multiplayer mode.  This seems like a massive oversight on Ubisoft’s part.  To make matters worse, at the beginning of each turn you have to pass the GamePad to the next player.  Compounding the problem, the mini games randomize who plays against the active player using the GamePad, adding to the confusion.  Nunchuks get twisted, there is mass confusion, and someone might get hit in the head with a Wiimote at that pace. It would have been a lot smoother to allow each player to have their own Wiimote and either ignore or disable input from those who are not actively playing the mini game with each other.

I did not have a chance to explore or test the Uplay aspects of the game, so I can’t describe how they enhance the game. It appears there are several places within the game where it ties in, but it seems tangential to the overall game experience.

Lastly, I would be remiss not to report some audio anomalies I experienced while playing. Strange pops and clicks manifested at what seemed like random intervals but only from the right audio channel.  It is kind of like that pop noise you hear when a record had a scratch on it.  If I had to venture a guess, it seems like there is some kind of problem with the audio mixing as sound effects play over the top of the music track. Over time, I discovered that the anomalies were actually consistent throughout mini games and results screens, but they did not occur during prerendered videos.  This only happened while playing Rabbids Land and not any other Wii U titles.  I have posted a video of it to my Youtube channel so you can hear it for yourself: https://www.youtube.com/watch?v=uJle5UChIF0. Ubisoft is sending me another copy of the game to try out just in case the one I had got corrupted in some way.  I will post an update if it turns out to be an issue with the disc I received.

In all, Rabbids Land has its ups and downs.  It’s never going to be as great as the original Rayman Raving Rabbids game series, but maybe that wasn’t Ubisoft’s goal for the game. If you want to challenge your friends to an electronic board game and can’t wait for a Mario Party title to come out for Wii U, then this might just be the perfect game for you.  For me, I think I’d rather play multiplayer in New Super Mario Bros. U instead.