Rakoo & Friends caught my attention with its high quality trailer.  I thought the opening animation was very good.  Turns out there’s even more in the game, making the cut scenes quite fun to watch.  As far as gameplay however, does this running adventure have legs to go the distance, or does it end up falling on its face? 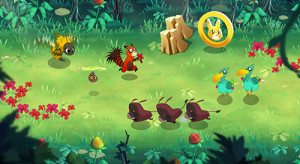 This is an updated version of Rakoo’s Adventure, a mobile game from a couple years back.  It has a look that reflects its origins, but it’s not a bad thing in this case.  The game is very colorful and detailed, with an art style that’s quite pleasing to the eyes.  I especially enjoyed Rakoos various expressions – he’s  a likable character, chasing after that special someone.  My real issue is that the environments overstay their welcome.  A change comes every 16 levels, which is too long – the same applies to the music.   Stutter (though uncommon) is another issue worth noting, especially as it’s my biggest pet peeve in a runner game.

You can take control with either the GamePad or a Wiimote, but no Pro Controller or Classic Controller Pro.  The d-pad is not used either.  Stylus control is supported, though I didn’t find it preferable. You do need to use touch screen for certain functions however, in lieu of buttons which is slightly odd.  As far as Rakoo goes, I like how his speed can be altered.  You can move him toward the front or back of the screen.  He can’t jump though, a basic ability strangely omitted.  Overall as a runner, I felt things moved a little too slowly. An optional means to increase the speed would’ve been welcomed. 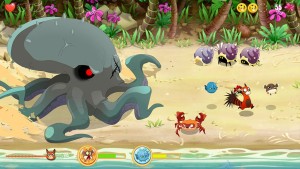 This game is quite easy.  If you have experience with runners, you’ll progress quickly with little trouble. Enemy patterns are slow, and they’re generally easy to avoid.  Powerups are numerous, and most levels seem to have several.  A few border on redundant, being mild variations on invincibility.  Helpful pets can also make things easier.  There’s four of them that can accompany Rakoo, and all will be unlocked early.  The bosses – most oddly placed in the middle of each area – don’t alter the core gameplay in a difficult way. Only the final boss encounter gave me any real challenge.

The move to Wii U has brought a few additions to this game.  Multiplayer support for up to five is included.  While I didn’t enjoy the pets playing solo, it was much more enjoyable having a friend control them in Co-op. Miiverse stamps (listed under the trophy icon) are another addition. Inexplicably though, you can’t attach screenshots to the community, an oversight that leaves egg on someone’s face! 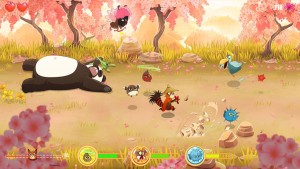 Replay incentives are collecting all the flowers and tokens. The flowers are mildly compelling in that you use them to purchase hats for Rakoo.  An infinite mode could’ve been a strong replay incentive, but the game is limited to a linear structure.  Outside of multiplayer, I really don’t think there’s much for the solo gamer with repeated plays.  It’s too bad there’s no option to up the difficulty.

Rakoo & Friends has launched at $9.99.  For a runner, does that seem high to you?  It does to me.  Granted, there are no in-app purchases on Wii U, but still.  Compared to other Wii U titles in that price range, this is shorter game, with minimal challenge, and light replay value.  These, and other small issues, really add up to detract from the experience.  Which is a shame, as the game has some things going for it.  Perhaps I’m finally starting to get burnt out on runners, but I’m limiting my recommendation to kids when the game goes on sale.  One to put on your wish list.

Rakoo & Friends has its share of issues, with the undemanding challenge being one of the biggest. As such, I’m only recommending this cute game for kids, and only once it goes on sale.