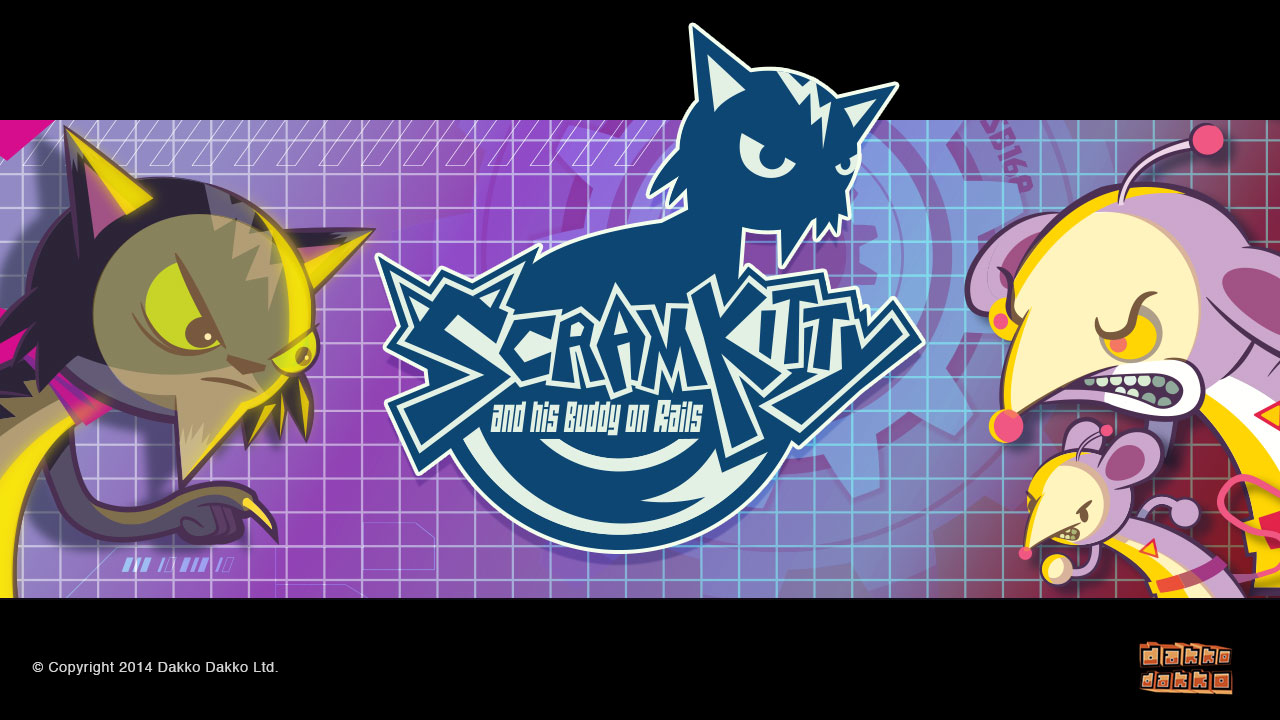 PN Review: Scram Kitty and his Buddy on Rails

Scram Kitty and his Buddy on Rails is a shoot ’em up game that adds a twist on the genre.  Scram Kitty is ‘on rails’ but in a different sense than what gamers are typically used to.  Scram Kitty is far from an on rails experience.  Players will have full control of their character but movement is limited almost exclusively to the walls of the levels.  This may sound strange but please let me explain.

This top down shooter is an interesting experience all around.  The characters, premise, and style are all unique.  Scram Kitty will have players exploring futuristic environments, avoiding obstacles, and battling space mice to save Earth’s cats.  Yes, in this game the mice are the aggressors, not the cats.  Players will control their ‘Spinboard’, a rotating, magnetic craft, around the various stages but all while either attached to the walls or boosting into space trying to reach other walls or bridge gaps.  Collecting other boosters, which are also counted as the player’s health meter, allows the Spinboard to ‘jump’ further but beware that this dual, health/jump, functionality of the boosters does increase the difficulty of some stages.

While the game starts off innocently enough, with the first few stages acting as a tutorial of sorts and allowing the player to acclimate themselves with the controls, the difficulty ramps up fairly early on.  Scram Kitty does not ease players into more difficult stages though.  Players will be thrown into some of the most difficult gameplay I have ever experienced very early on.  In some early stages jumps and maneuvers will have to be spot on to clear certain portions of the level.  Some jumps may require a full set of boosters, hence my earlier comment regarding the dual functionality of the boosters.  I always welcome an extra challenge in games that I play and with Scram Kitty that remains the case, as the satisfaction of clearing a particularly difficult portion of a level often trumps my frustration.  But with that being said some players may find Scram Kitty and his Buddy on Rails frustratingly difficult very early on in the game.

Most of the game is played not on the TV but via the GamePad.  This doesn’t mean the TV is of no use but for the most part the game could be played with the TV off.  Don’t think that the TV doesn’t play any role in the game though.  Scram Kitty keeps you updated on stage progress, gives you helpful hints, and other information throughout the game which is delivered by a cat that will appear from time to time on the television screen.  So those who may need help while playing Scram Kitty, which is likely a majority of players unless you’re superhuman, will probably want to leave the TV on.

There is one other mode available in Scram Kitty in addition to the standard Adventure mode.  This added time attack styled mode, called Challenge mode, does in fact add more difficulty to the already steep challenge that the game provides with its basic Adventure experience.  In time attack players are still tasked with saving cats with their Spinboard that is full to the max with boosters.  Taking damage in Challenge mode doesn’t take away boosters but in this case takes away time.  Also, instead of collecting extra boosters, extra time can be picked up in its place.  The Challenge mode is played the same way as Adventure mode using the same levels and level layouts but players will have to start from the beginning of the levels after dying, which will also set your score for that round.  The goal is to top your previous high score but with the challenging nature of the game, I wish gamers the best of luck getting very far in the levels using this mode.

Scram Kitty and his Buddy on Rails is a highly entertaining experience but not one for those who don’t like difficult games.  I am not sure I can express that enough.  For a shmup with a cartoon styling, the graphics are quite impressive.  The game looks quite nice but is very simplistic at the same time.  The sound effects and music are equally simplistic but fit the game quite well.  There is not any part of Scram Kitty that is lacking in any way.  It is a highly polished experience and one that any gamer could enjoy but as stated many times before, if difficult games are not your thing, avoid Scram Kitty and his Buddy on Rails at all costs!