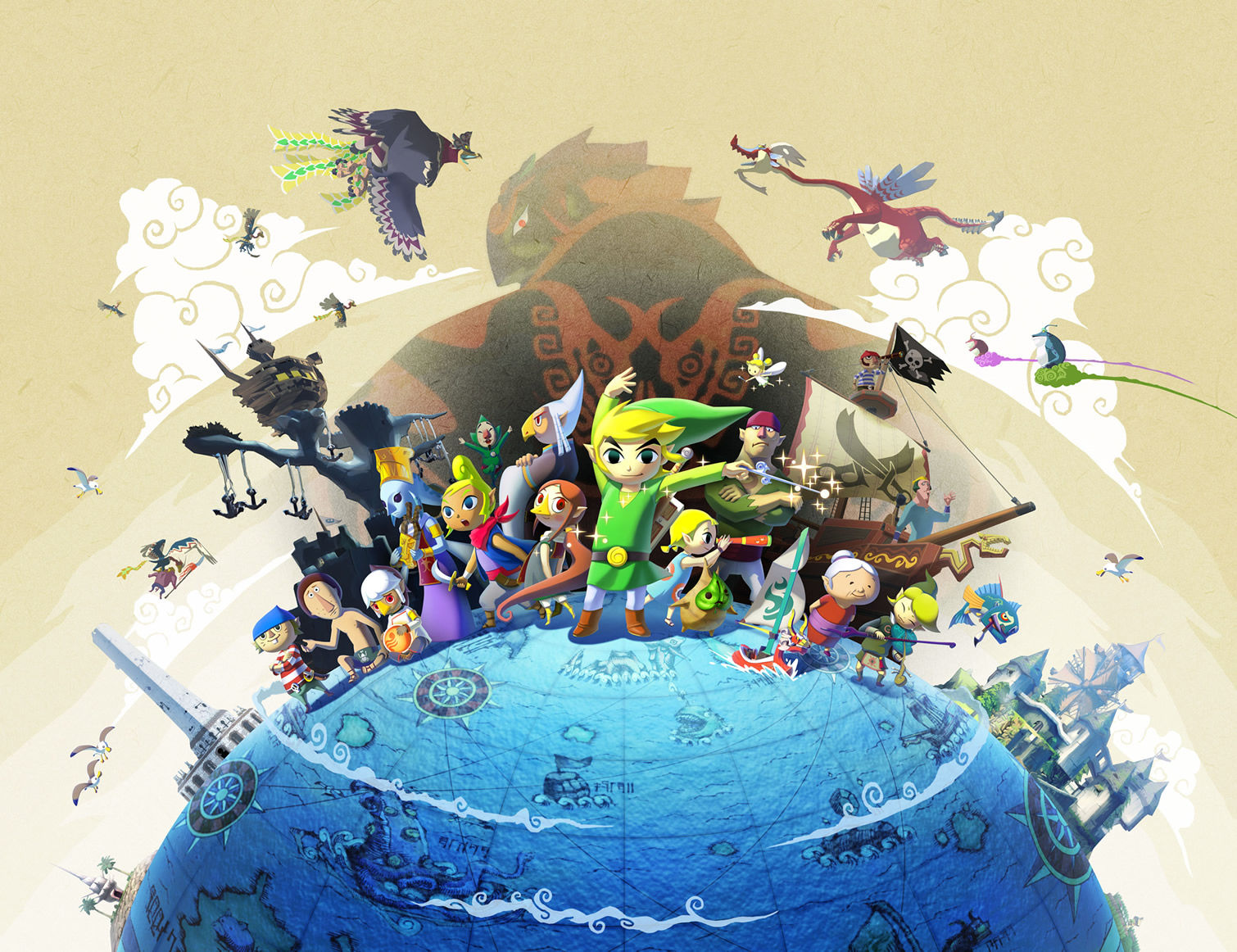 It seems extremely rare in this day to find decent remakes. Sure you can give a game a good HD polish, but how does it hold up? You don’t see game designers running off to make E.T. HD. If a company is going to remake a game from a beloved franchise, it needs careful thought. Questions like: “What were we limited to when we made this?” and “What can we fix that seemed like a problem in the final release?” are the right issues that need to be addressed.

Nintendo presented to the gaming community the works of bringing one of their most cherished franchises into the HD world. Oddly enough, the one title they chose was “The Legend of Zelda: The Wind Waker”. Now I personally love this title. But even I questioned: “Out of all the Zelda games to bring back into HD, why this one?” Yes I was skeptical, but I had faith in Nintendo’s decision. I was very fortunate enough to review this title, but how would it fair out? Would previous problems be addressed? Would this potentially damage the franchise?…and would Tingle still be creepy as ever?!

Lets take a look and find out in The Legend of Zelda: Wind Waker HD.

Our story begins with a quick and epic tale of the ancient kingdom of Hyrule. It is said that long ago an evil man named Ganon, sought out Hyrule’s greatest power, the Triforce. Laying waste to the land, the people of Hyrule thought their doom was at hand…until a hero appeared. Donning a green tunic, a boy emerged from the forest wielding the blade of evils bane. Traveling back and forth between the past and the future, he would go down in legend as “The Hero of Time”. Our hero would then leave Hyrule to embark on another quest…little did he know that Ganon would once again rise and seek his revenge on the kingdom that locked him away. The people prayed for the return of their hero…but their prayers fell on deaf ears.

But this is just an ancient tale. We are then taken to the quaint island known as Outset. It’s Links birthday and is customary on the island that boys must wear the garb of the Hero of Time when they reach the same age when he defeated Ganon. Not only is it to honor his legend, but the hopes that the boys of the island will gain the same courage as the hero.

Before Link can even blow out the birthday candles, a monstrous bird approaches the island with a girl in his talons while being pursued by a ship of pirates. It turns out that the captive girl is Tetra, Captain of the pirate gang. Shortly after your daring rescue, the giant bird comes back with great speed and kidnaps Links little sister, Aryll.

This is where Links adventure truly begins. But why would this giant bird want to kidnap Links sister? In fact, why did it try to kidnap Tetra in the first place? The answer lies beyond the great sea and it’s up to you to explore it.

At the very beginning of the game, you have the option to choose your controller option. You can play with either the Wii U gamepad or the Pro Controller. The true experience hands down is playing with the Wii U gamepad. If I wanted to play with the Pro Controller, I’d just hook up my GameCube and play the original title. Another feature to take into account is the choice of “Hero Mode”. This mode is for the hardcore Zelda player, as not only do enemies deal out double the damage, but there are no hearts dropped from bushes, pots, grass, enemies, etc. The only way you can heal is by collecting heart pieces, using fairies or potions. My first play through of Wind Waker HD was on Hero Mode and I loved it. I couldn’t just run into dungeons swinging my sword like crazy. I had to plan my actions, take my time and make sure that I was properly equipped with healing items. To me, this is the way Zelda is meant to be played.

The Wii U gamepad offers some new unique features that change the way you play Wind Waker. Looking at the gamepad, there are three separate tabs. Items, Map and Bottles. Players will have the option to either pause the gameplay completely, then arrange their items accordingly to the Y, X and R button. Now pausing the game then selecting your arsenal is a safe way to play, but for those who like to live on the edge, can select their items in real time by sliding the desired item to its button slot. A small feature yes, but one that keeps the momentum of the game flowing.

Now selecting items on the fly is great and all but now comes one of my favorite improvements. The map. In the original Wind Waker, you had to access your map in a separate menu, which would pause the game. Believe me when I say how annoying it was to constantly check my charts only to be pausing the game therefore hindering my quest. Impatient maybe, but thanks to the fantastic capabilities of the gamepad, the map can now be viewed and operated while sailing! Again, much like the ability to select items in real time, you might be thinking “Wow Tristan, you sure get excited over the small things in life don’t you?” To answer your question, yes I do get excited over the small things in life. BUT! The fact that I can look at all of my sea charts, plan my next destination while I’m still sailing is a time saver.

Lastly, there’s the Bottle menu. This menu is reserved for the use of the Tingle Bottle, which replaced the Tingle Tuner in original Wind Waker. The Tingle Bottle is a clever intuitive way to interact with the Miiverse. Players can write messages in the Tingle bottle and throw them in the ocean for other players to find washed up on the shore throughout their quest and vice versa. You can also attach pictures taken from your Picto Box which can now allow Link to take pictures of himself. That’s right. Link can now take selfies.

The gamepad can also be used to aim weapons such as your boomerang, grappling hook and your bow and arrow using the gamepads gyroscope feature. This makes latching onto hooks and hitting long distance both interactive and fun.

One of the biggest features in Wind Waker, both in the original and the HD remake, is the ability to control the wind. Shortly after Link begins his quest, he is given the Wind Waker, a conductors baton used to control the winds of the great sea. This is one of the biggest features of the game as conducting the winds is the only way to give your sail some wind to ride on. Players can use the gamepad to conduct the winds simply by dragging your finger across the screen. Not only that, but the touch screen will also have a reference to all the songs you learn along the way.

Remember how I mentioned that the Wind Waker is the only way to give your sail any wind? Well that’s not entirely true. Nintendo put a new item in the game called the Swift Sail. It can be purchased at the auction house on Windfall Island shortly after beating the games first dungeon. Equipping this sail will not only cause your ship to sail faster, but no matter which direction you face, the wind will always blow in the direction you’re facing.

I’ll be honest; I have mixed feelings about this sail. While yes it makes sailing a lot easier, it kind of makes the purpose of conducting the wind, pointless. Personally I encourage you, my fellow gamers, to wait until at least the Triforce quest to pick up this marvel in sailing equipment.

So you’re probably thinking “Wow Tristan! Looks like smooth sailing from here!” but chances are you’re saying “WOAH WOAH WOAH….Triforce quest?…You mean the most annoying and tedious part of the original Wink Waker?!” Yes, the Triforce quest. For you newcomers to Wind Waker, allow me to divulge you.

Near the end of the game, you are tasked with the quest to find the eight shards that make up the Triforce of Courage. Sounds difficult right? Just wait. Soon after, you receive a chart from Tingle called the “IN-credible Chart”. This chart showed you where to find the eight Triforce charts that would then lead you to said pieces of the Triforce.

So lets re-cap. You have a chart that shows you the location of another chart only to go back to find a piece of the Triforce. Oh yeah, and each chart costs 398 rupees to decipher ultimately costing you 3,184 rupees total.

Well that was then. The good people at Nintendo realized that next to sailing, this was the most annoying part of the game. To shorten things up, you can begin the Triforce quest earlier in the game and there are only three charts to find, giving you five pieces ripe for the picking!

I cannot begin to express how relieved I was to see a much easier Triforce fetch quest. Whenever I would replay Wind Waker on the GameCube, this would be the one moment that I would dread. But now, I look forward to this reasonable and no longer tedious challenge.

The Legend of Zelda Wind Waker is up there as one of my favorite Zelda titles. The cell-shaded art style is charming and has aged extraordinarily well over the years and looks gorgeous in HD. Gamers will grow with Link as he soon discovers that there is a larger world to be explored beyond the shores of his small island.

If you’ve played Wind Waker on the GameCube, then chances are, you’ll be playing it on the Wii U. If you haven’t played Wind Waker before, I implore you to step into this beautifully vivid world. Take hold of your destiny and wake the winds. Become the legend once again.