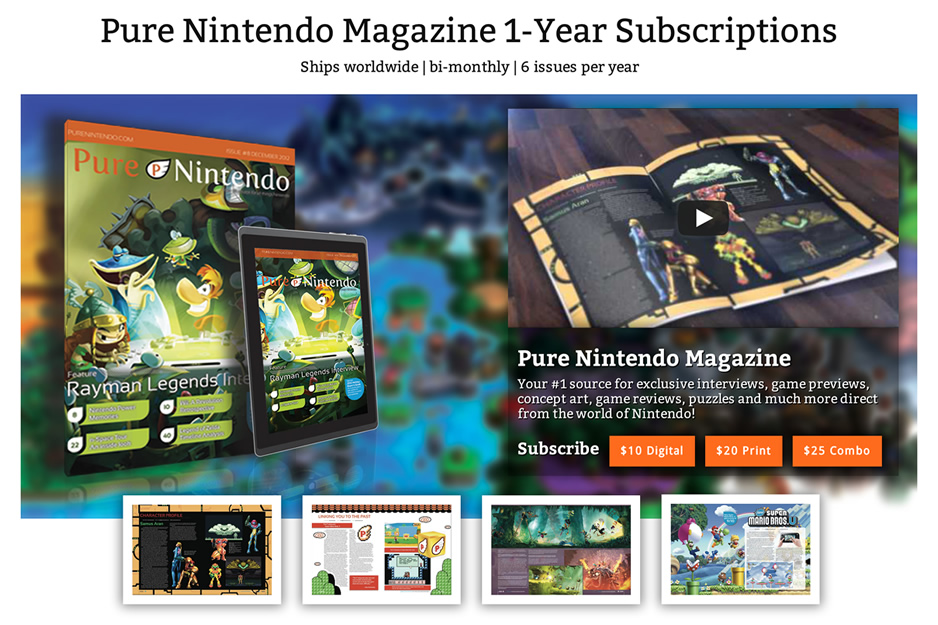 Nashville, TN – January 24th 2013 – Pure Nintendo is proud to announce the release of the first-ever interactive Nintendo magazine!  Starting today, the Pure Nintendo app is available on the Google Play marketplace as a free download.  One year subscriptions are at an introductory rate of $9.99/year and include 6 issues of the latest and greatest Nintendo news.  Our tablet version of Pure Nintendo Magazine is fully interactive. You will immerse yourself in our content by tapping, sliding, and tilting your tablet from portrait to horizontal. So, prepare yourself for a Nintendo experience like never before. Single issues of the magazine can be purchased for $2.99.  For digital subscriptions, print subscriptions, or for print/digital combo subscriptions visit http://purenintendomagazine.com/.

Debuting with the Android version of Pure Nintendo Magazine is Issue #8 which is full of exclusive content and interactive puzzles! The main feature is an in-depth interview with the Lead Game Designer for Rayman Legends, with never before seen screens and artwork.  There is also a behind the scenes tour of n-Space and a character bio on Samus Aran. All this and more is wrapped up with a reader driven tribute to the magazine that paved the way for all gaming magazines, Nintendo Power.

A little about Pure Nintendo Magazine

Pure Nintendo Magazine is your #1 source for exclusive interviews, game previews, concept art, game reviews, puzzles and much more direct from the world of Nintendo!  Subscriptions available in print, digital, and the all-new interactive tablet version for the Google Play marketplace.