Purely Opinion: Professor Layton Fighting in Smash? I’m Not so Sure.

Purely Opinion: Professor Layton Fighting in Smash? I’m Not so Sure.

I’ve been in a deductive mood recently, and I have happened to notice a rumor going around about Professor Layton being poised to appear in Super Smash Bros in some form; many hope he will appear as a DLC character.

Who wants to say it? My body can’t contain the hype. Someone fill in the blank. _____ in Smash. pic.twitter.com/IXiq5Ejbcg

Looking at the IMDB entry which helped spark the rumor, I don’t believe this is the case.

I should start by stating that Nintendo likely will not comment on this rumor in any official capacity, so we may not have any definitive answer until word comes down from the Kyoto-based company via channels such as a press release or Nintendo Direct.

Much of my argument comes from exactly what is stated in Chris Miller’s IMDB page I have linked above.  In it, Mr Miller is only credited for the 3DS version of Smash Bros.  Though it is only one piece of evidence, there is a lot of information I can extract out of it.

I will begin by pointing out that there are differences between the 3DS and Wii U versions.  A great deal of differences between these two versions deal with their specific platforms.  The 3DS version has more stages specific to handheld titles, and the Wii U version has stages specific to console titles.  For example, the 3DS version of Super Smash Bros features a stage based off of The Legend of Zelda: Spirit Tracks, a game exclusively for the Nintendo DS.  On the flip side, the Mario Galaxy stage only appears in the Wii U version, just as the Mario Galaxy series has only appeared on the Wii.  To go even further, some stages that are shared between games have minor differences. 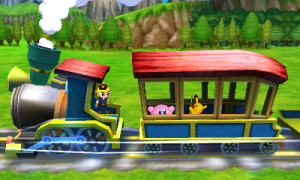 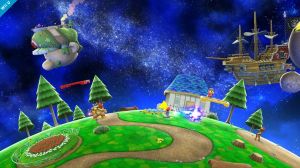 Let’s look at the Guar Plain Stage from Xenoblade Chronicles.  One notable difference between versions is that the Wii U plains are larger, and feature more platforms, than its 3DS version.  Additionally, Metal Face only appears in the Wii U version.  Interestingly, if you look on Timothy Watson’s, the voice actor for Metal Face in Smash Bros, IMDB page, you’ll notice that he is only credited for the Wii U version of Smash Bros.  Comparing this to the voice actors of fighters in the game, you’ll noticed that they are credited for both the Wii U and 3DS version of Super Smash Bros.

There are only three types of characters who receive voices in Smash Bros, environmental characters, assist trophies, and the smash fighters themselves.  However, we know that both characters and assist trophies are perfectly consistent between the two titles, meaning that one does not appear in only a single version of the game.  On the other hand, Metal Face, an environmental character, only appears on the Wii U version of Smash Bros.  Taking all of this into account, I can only conclude one thing: If Layton is to appear in Smash Bros, than he will do so as apart of a 3DS exclusive stage, and not as a character nor assist trophy.  Of course, this entire article is drawn from a very fresh rumor, so only time will tell if I am proved correct.