Metal Slug is one of those series that’s seemingly been around forever, spanning seven titles over 12 years, plus numerous compilations and spin-offs, all across many gaming platforms (check out our Metal Slug 3 review too). Metal Slug 2 was originally released in 1998 as the first sequel in the popular series. So how does it fare today?

As a run-and-gun game, the gameplay is simple – run from left to right and shoot as many enemies as possible. There’s plenty of variety in the setup and design though, with some stages featuring vertical-scrolling levels, for example. A lot of the environment is interactive too, from destroying abandoned vehicles to rescuing prisoners along the way. There are six stages (called missions here) to complete, each ramping up the difficulty level until the final mission. 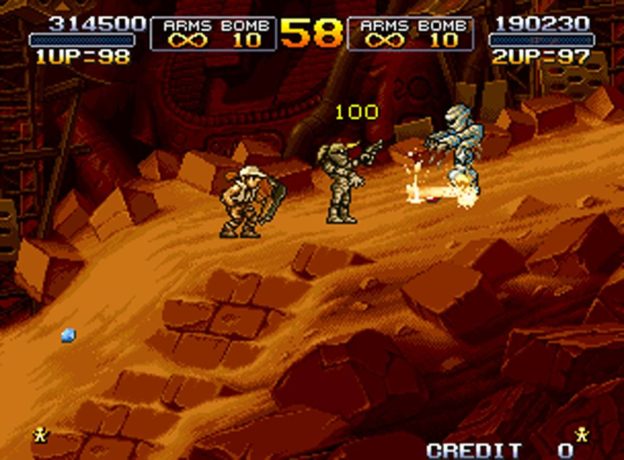 There is some variety to the enemies too. You’ll mostly be dealing with soldiers, who carry a number of different weapons to take you out. One stage randomly throws bandaged mummies at you, who hurl purple venom your way that actually transforms you into a mummy too. An antidote is available throughout the level, but another hit in the meantime means death. You’ll also face some scary-looking, wall-climbing monsters in a later stage, who you have to free from cages before destroying. These moments create a sense of urgent, tense creepiness, so it becomes more than a simple war you’re fighting. Finally, each mission ends with a boss to fight, usually some sort of overly large vehicle, and these guys are significantly stronger.

With so many enemies to fight, you’d be right in assuming that death lurks at every turn. Your character will die constantly, particularly when facing the boss. As with most of these arcade conversions, I’m reminded of how many coins must have been pumped into games like this back in the day. Thankfully in these home versions, you can easily add your own credits to continue playing. 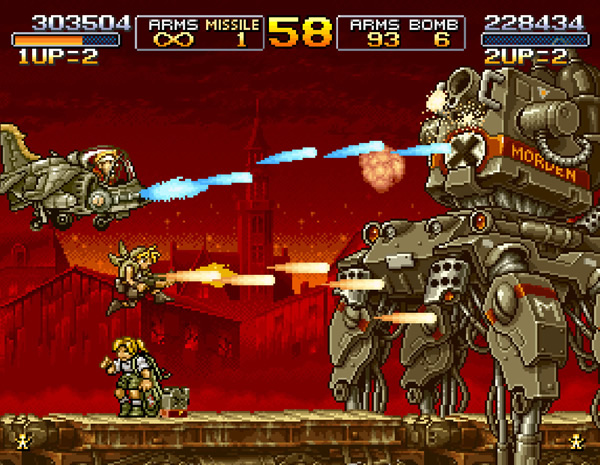 One of the best features of Metal Slug 2 is the upgradeable weapons. There are several weapons to try, each with limited ammo (though a generous amount is provided), with everything from lasers to homing missiles. You’ll also encounter special vehicles along the way that one player can jump into and ride until the shield is depleted. These add extra firepower and defense, but unfortunately only one vehicle is provided in co-op mode, which is slightly disappointing for the other player.

The simple, ‘90s graphics are great. There’s plenty going on around you and, considering it’s such a violent game, the cartoony style helps to take the edge off. For example, there’s no gore or blood (it looks like water) and enemies disappear once dispatched. For those who do enjoy that gore factor, the original and bloody Japanese version is also available from the menu. The backgrounds look fantastic, with a brilliantly retro art style that looks as good now as it did back then. The only slight downside to the visuals is the occasional slowdown that occurs when too many enemies are on screen. 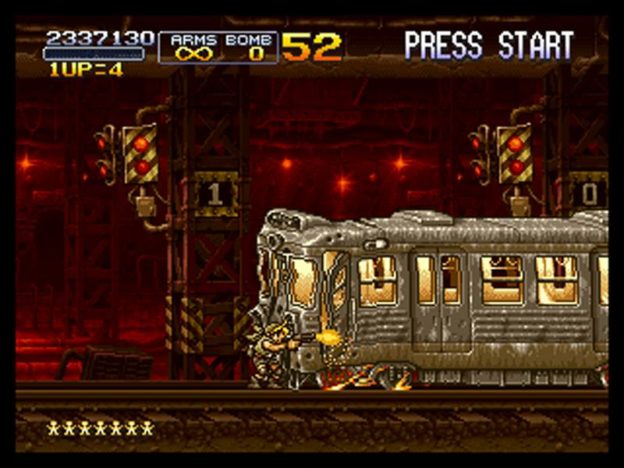 Overall, Metal Slug 2 is a fun game that’s full of classic run-and-gun action. In the absence of a Virtual Console on the Switch, these SNK releases really hit that sweet spot for anyone craving retro gaming. Metal Slug 2 is arcade perfect, right down to the high difficulty level and occasional sprite slowdown. With limitless credits, it’s now much easier to play your way through, and it’s worth the ride.

Metal Slug 2 is a classic run-and-gun game with plenty of action. It’s a tough game, but that’s the point, and you’ll certainly have fun wading through hordes of soldiers and trying new weapons, especially with a buddy in co-op mode.