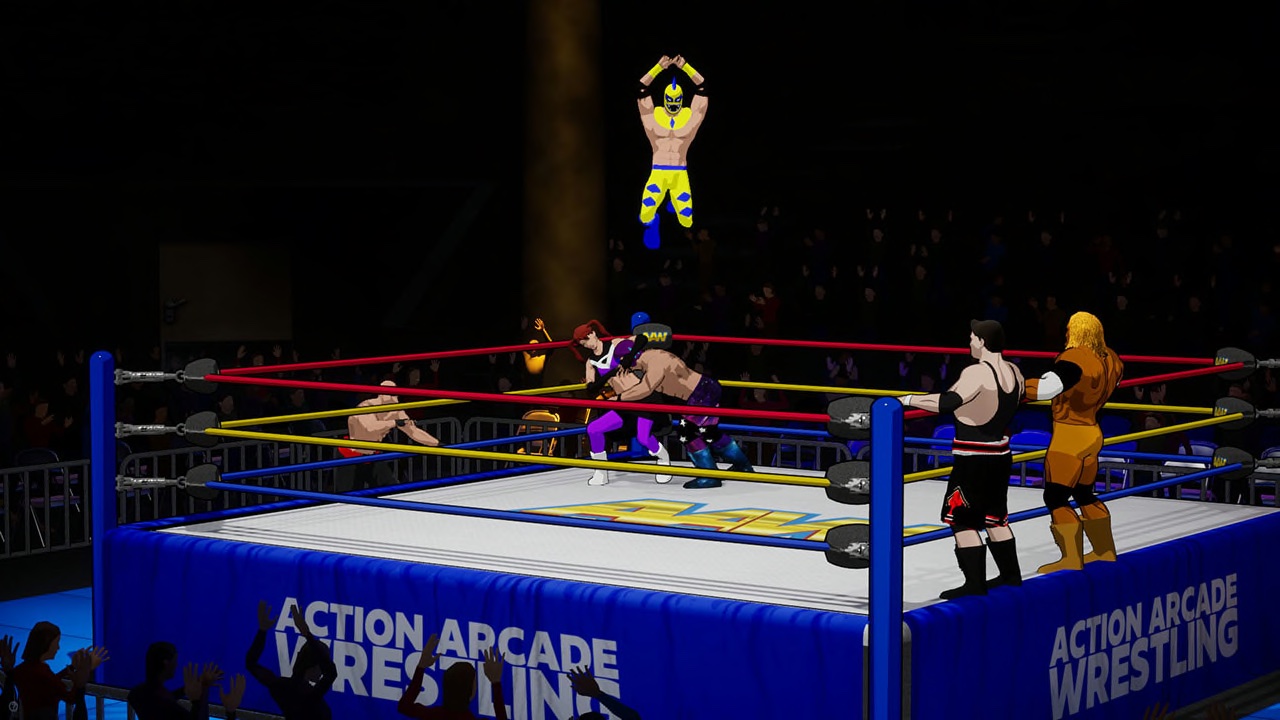 By Roger Reichardt  •  4 months ago

There's been enough talk. It's time for the main event!

In the spirit of the game, we’ve decided to make this review the tag team debut of two of Nintendo’s most…uh…”seasoned” writers—The Rogue and Here Comes Hiner. As many great commentators have declared over time, “There’s not gonna be a pay per view…it’s gonna happen right here!”

Rogue: I’m a huge wrestling game fan. So, when I saw that Action Arcade Wrestling was coming to the Switch, I knew I wanted to play it. The graphics and smooth-looking moves are impressive, but I was left wanting more. There are clues of things to come, but for now, there’s not enough to keep my interest for long.

Here Comes: On the flip side of that, the only wrestling game I ever really loved was Body Slam: Super Pro Wrestling on the Intellivision. This is largely because of the moveset. At the beginning of the match, you got to select which moves you wanted to include in your arsenal, then assigned them to a number on a keypad. This made control very simple and customizable, something that’s not really available in Action Arcade Wrestling. 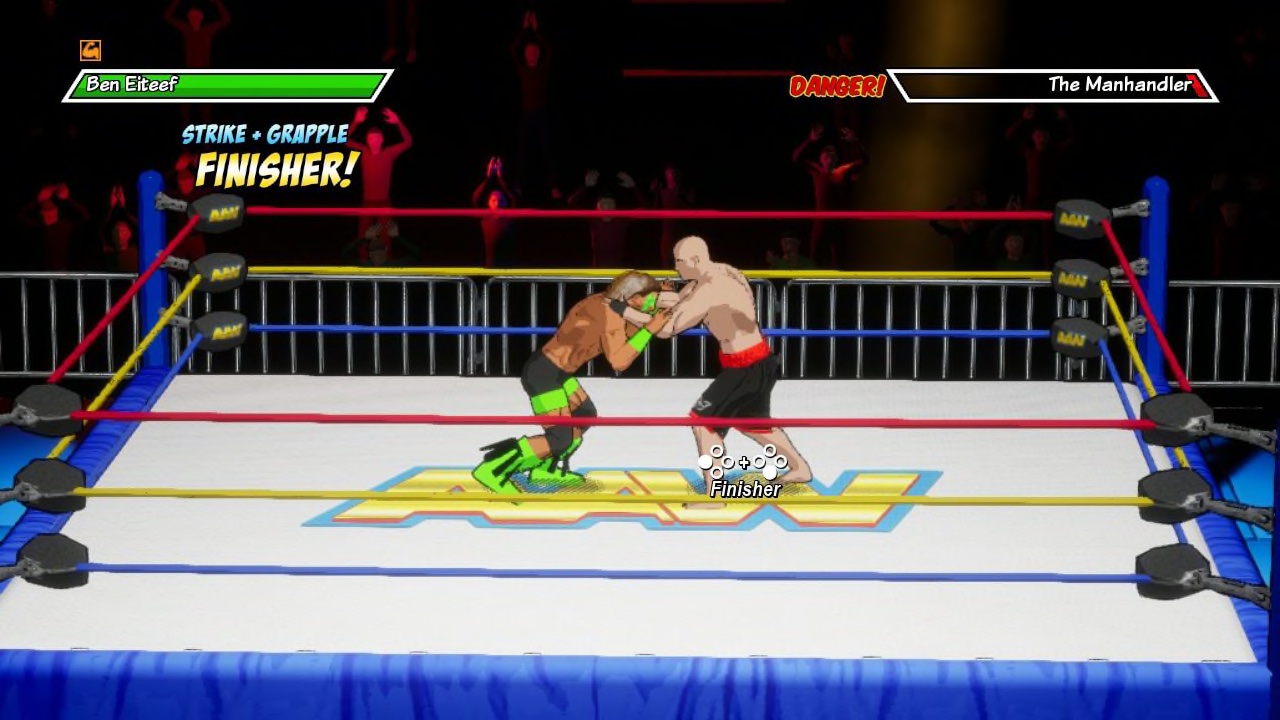 Rogue: The game starts with a short tutorial showing basic moves. What I like about Action Arcade Wrestling is its simplicity. You have a quick and a couple of strong strike attacks. You also have a swift and strong grapple. Holding directional buttons while making a grapple will execute different moves. There are also submission holds while the opponent is on the ground, and you can make aerial attacks off the top rope. The movements are smooth, and the animation is beautiful. A few times, it felt like a hit should have landed a few times but didn’t, but I blame that on not having my character aligned correctly. 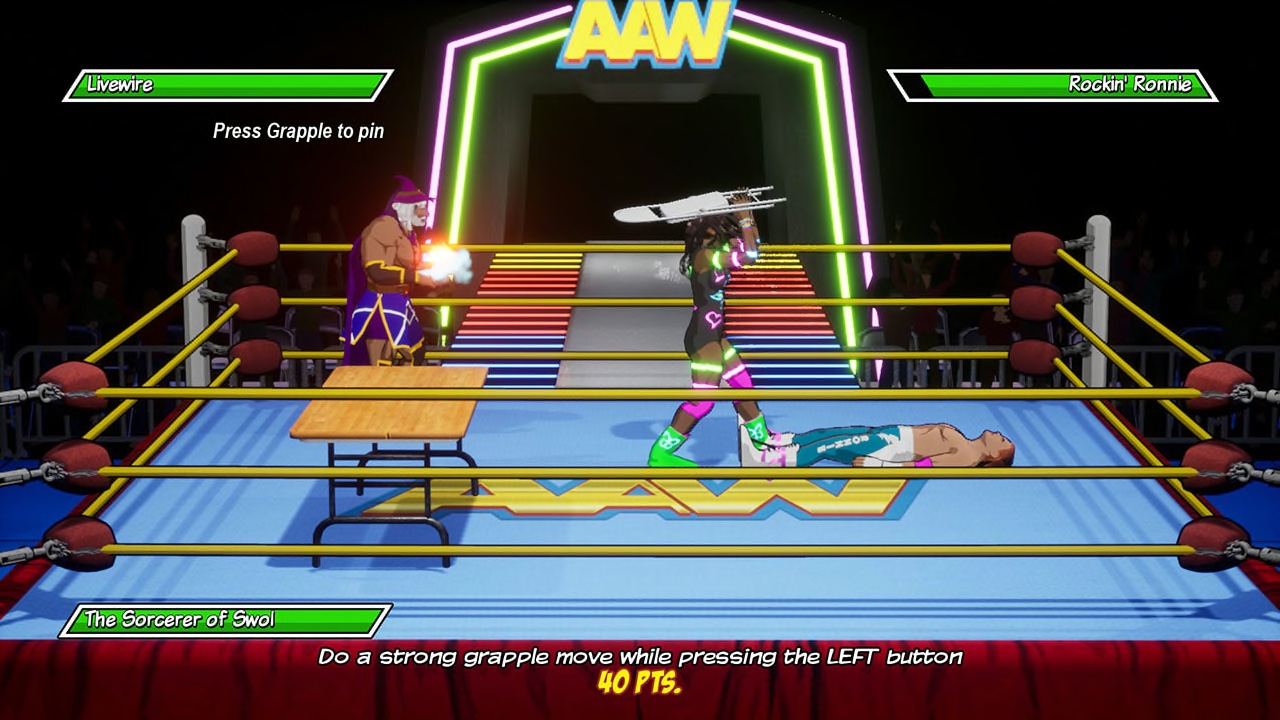 Here Comes: The developers specifically wanted to ease the control scheme, thereby ignoring most of the buttons on your Joy-Con. I understand the motivation, but it means you have to use the D-pad to access certain moves, and sometimes double tap or press two buttons simultaneously to get the desired effect. That’s not a whole lot easier than using, say, the shoulder buttons. But even if you don’t hit the D-pad in the direction you want, you’ll still get a move, although perhaps not the one you were shooting for. In this regard, it helps that the wrestlers mostly all have the same moves, speaking of which…

Rogue: – allows for some robust creations. And the fact that it is a separate app allows for cross-console designs; since Action Arcade Wrestling has been out for a while on Steam, there are quite a few fan-created wrestlers and arenas you can already download.

Here Comes: The result of this is you get a wonderful mashup of fictitious wrestlers and personas you’ll recognize. Some of them are actually very good, too—the Kenny Omega and Orange Cassidy likenesses I downloaded (all free, by the way) are quite accurate, visually. You won’t be ending matches with the V-trigger or the Superman Punch, as those moves aren’t in the game, but that doesn’t ruin the fun of taking your favorite wrestlers into the ring. 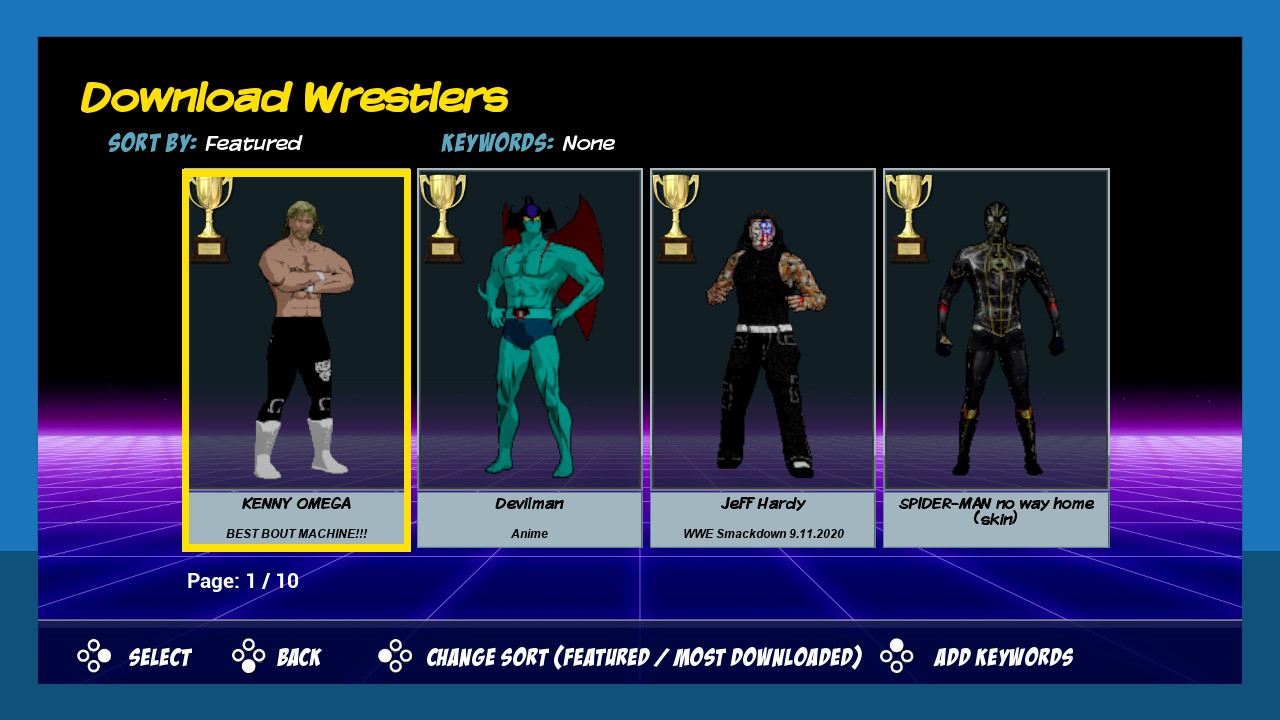 Rogue: The creation suite boasts a “create a federation,” which piqued my curiosity. But unfortunately, this isn’t fleshed out yet. The bones for the feature is there, but when I created my federation and the titles, none of my changes seemed to apply to the game. For example, there isn’t a league or career mode. The only option available is exhibition mode. And even when I put a title on the line in an exhibition match, the title didn’t change hands. It wasn’t apparent that one of my wrestlers was even a champion.

Here Comes: Yeah, I think the key word in this game is “Arcade.” Action Arcade Wrestling very much plays like the type of game you’d dump a quarter into, then move on. You can’t create wrestlers and advance them through a gauntlet of matches to win a title. There’s no league management. The wrestlers don’t even have entrances. The match starts with the opponents in the ring, ready to go. That’s not necessarily a bad thing, however. (Honestly, I maybe wouldn’t have quit watching WWE if they’d started a show—any show—with the wrestlers in the ring, ready to go.)

Rogue: There are quite a few match options, ranging from one on one to tag team matches to fatal four-ways and more. While I appreciate the possibilities, the fact that it’s all just exhibition matches just feels flat. I was left wanting more. 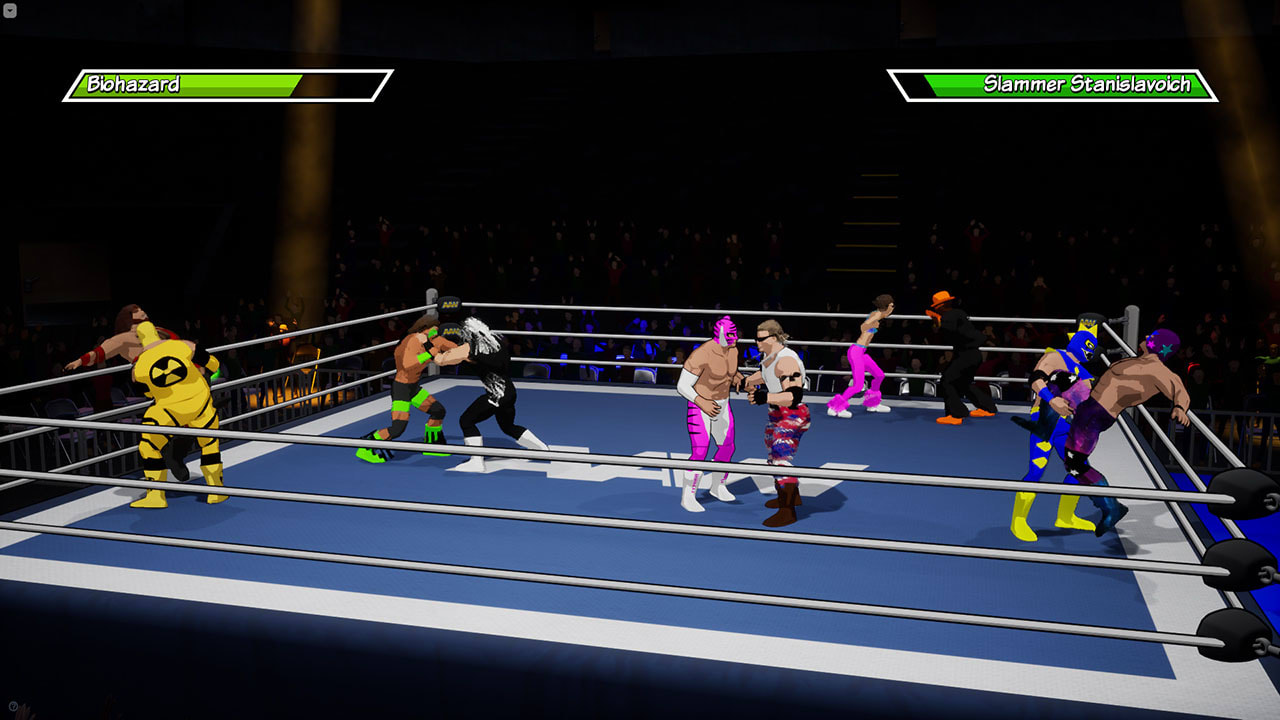 Here Comes: That’s fair, but unless you’re looking for cage matches or ladder matches, nearly everything you’ll want is covered here. There’s even a 10-wrestler battle royal, complete with a larger ring to accommodate the action (pictured above). You can set up matches where random objects are tossed into the ring, and those objects can be hilarious to use. Some of the wrestlers have unique powers (pictured below) that certainly couldn’t exist in the real world (but honestly, I’d say the same thing about Rey Fenix). And although placement and timing sometimes feel off when trying to execute moves, the combat largely has a nice, physical feel to it that seems accurate. I also like that matches occasionally call out “spots” for the wrestlers to perform within a certain amount of time. Pull them off, and you’ll get some nice bonuses. But if your opponent knows what you’re about to do, it’s easier to counter that move. So, the in-ring action really is pretty satisfying, there’s just not much going on outside the ring to keep you coming back. 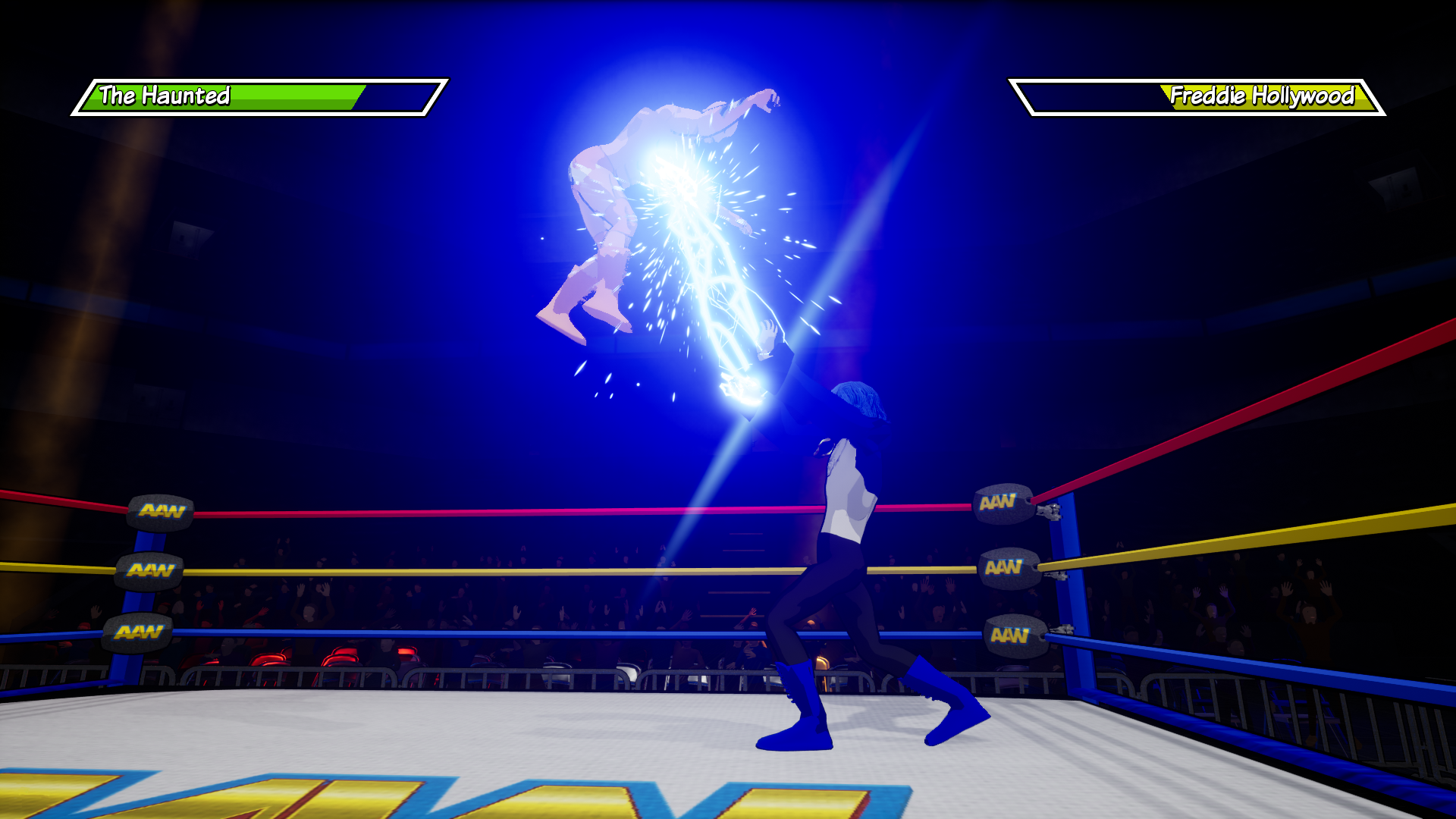 Rogue: I know the devs have a roadmap for future enhancements. It feels weird that the option for a federation is there but didn’t amount to anything.

Here Comes: Agreed. And this means that Action Arcade Wrestling is really better suited to multiplayer. The good news here is that four co-op is available locally. This makes those tag matches and the battle royal a lot of fun. However, there’s no online multiplayer. If you don’t have an available faction of family and friends, there’s little incentive to enter the ring on a regular basis.

Rogue: I don’t want to say I was disappointed, but I was left wanting more.

Here Comes: It’s admittedly “green.” But with some more development, it could be headlining PPVs.

Action Arcade Wrestling is a beautiful and smooth game that’s very attractively priced. Easy to pick up and play, it boasts a deep (but separate) creator’s tool with plenty of community-created wrestlers to download. What it does, it does well. But it’s missing features to make it a great game, specifically a career or federation mode. The framework is there, so hopefully, we will see that in the future.