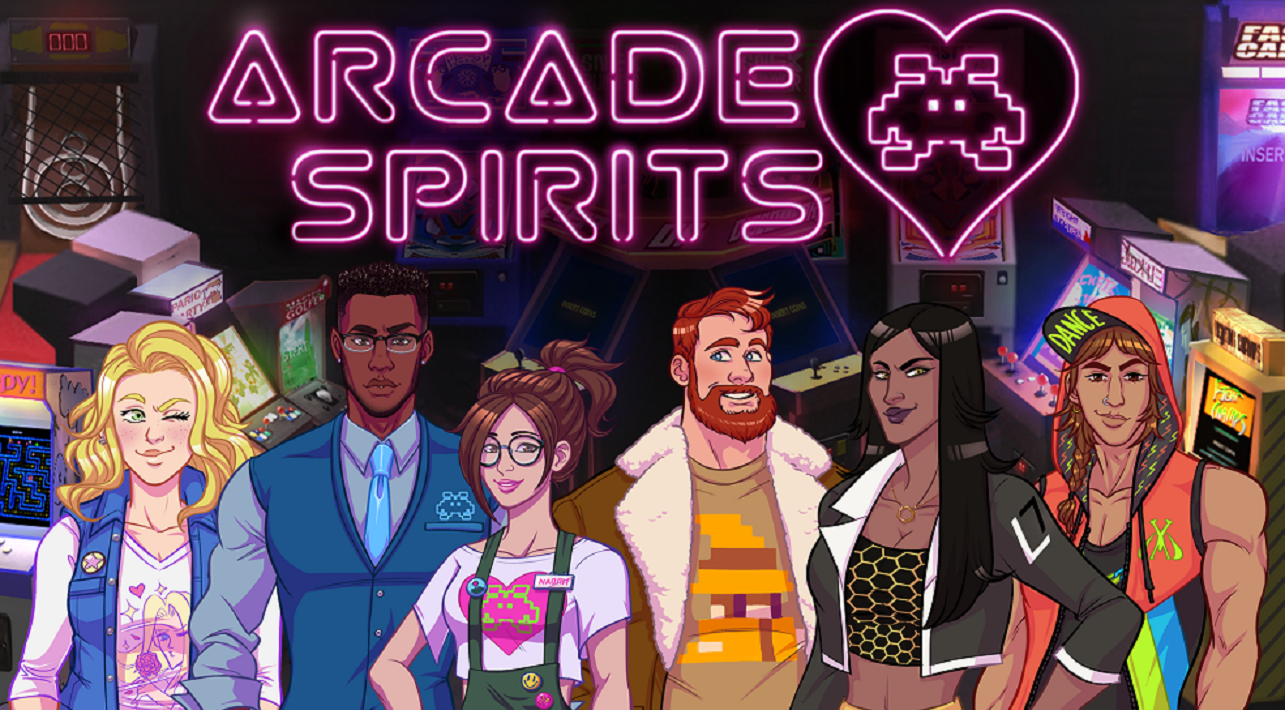 Arcade Spirits is a visual novel with a very intriguing premise: “What if the 1983 video game marketing crash never happened?” Since I’m old enough to have many fond memories of ‘80s arcades (even if I needed to stand on a step stool to do so), I seemed to be the right choice to review this title.

There’s a romantic element here, which can take near-equal billing with the main plot. I found it odd that I had the choice to be attracted to nearly every single person I met, of either gender. Why not let me pick a preference from the start? This current implementation comes off feeling a bit forced, making the characters seem uneven in terms of authenticity. My guess is there was some recognition of this because the romance is thankfully optional. On my second playthrough, I chose to ignore it and focus on friendships only. While there’s still a bit of heavy-handed flirting, I found the game sizably better with the absence of romance. In fairness, the last romantic visual novel I played was probably Sprung, if you can remember that one. (a cheap game for my DS, one not memorable enough to stay in my collection). Again, Arcade Spirits drew me with its settings, not its romantic elements.

Before I jump into the strengths of the arcade, I need to address one of my biggest disappointments. The game, at least currently, advertises playing as yourself, with everything being customizable. But this is misleading. While you can pick from three awful hairstyles, your character will always look androgynous. It yanked me out of the story every time “I” appeared on screen, making me feel disconnected. Having a male and female variation or a couple of other outfits would have been smart. The devs meant well, but here’s a case where the idea probably should’ve been scrapped, cause in its present state it all feels pretty meaningless. I’m “99.97%” sure I’m not alone in thinking this. Like Naomi (the in-game tech) would say, “I think the goal is to have something for everyone… but that means it’s not particularly great at any one of those things.”

Once that poor first impression was past me, I began to appreciate everything Arcade Spirits has working in its favor. The core story has something of a page-turning element to it. As a new hire for an east coast arcade (owned by a kindly older woman named Francine), you start by going through the motions, trying to make a dent in smaller issues like stolen tickets. But soon, you’ll be looking to make the arcade grow, moving on to bigger things. There’s some melodrama, but it’s not over the top. And no, I won’t spoil anything specific; this is a story-driven game after all.

It’s not a chain you’re working for, but a mom-and-pop arcade (or grandma-and-grandpa kind of arcade as you later call it). It’s located in the Twin Pines strip mall, one of many pop culture references. The setting is a winner, with many legit games mentioned. You’ll hear mention of Centipede, Donkey Kong, Frogger, Joust, Pac-Man, and Street Fighter, to name some. Even old Q*Bert gets a nod, as any character cursing gets handled in symbol fashion.

Speaking of characters, they vary in quality. One, QueenBee the competitive gamer, makes liberal use of cursing as mentioned above; you can request toning it down. With a mix of personalities, you’ll seek out some more than others. Thankfully, none as unattractive as your avatar. Each cares about the arcade, leaves an impression, and has voice work that I appreciated. Though limited, it brings flavor to the story while adding some good humor. And on replay, you can talk to different characters at different points to get fresh dialogue from them. You can also respond differently – gutsy instead of quirky, for instance – to shape your personality.

One of the best-supporting characters isn’t even human. IRIS is a program you download on your 20xx phone at the games start, thanks to a suggestion from your well-meaning roommate. IRIS acts as your personal life coach/Girl Friday. She keeps track of the way you’re shaping your personality and aims to help you with your spirit – “Your hopes and dreams, your life’s passions!” She’ll even provide you with pizza facts, a fun little extra, at the end of each day. IRIS does even more, but again, I don’t want to get too specific. But wait and see if you happen to encounter a Polybius machine with defective A.I. in its microchips.

Surprisingly, my favorite aspect of Arcade Spirits might be the music. I’m not familiar with Greg Mirles, but his ‘80s synthwave tunes are an absolute joy to hear. I upped the music volume in the settings and wore earbuds to soak in each track. An ideal fit that, when combined with the sound effects and vocals, makes Arcade Spirits positively shine on the audio side.

In the end, I have my legit criticisms with Arcade Spirits. Sufficient attention wasn’t directed toward the customization options and some of the priorities in the game are odd. It seems like a title for a narrower audience, probably acquired at a sale price.

But it does more right than wrong, thankfully. Despite not reaching its full potential, I still found some entertainment in Arcade Spirits. By ignoring the romantic aspects, I was able to play it as someone with an appreciation of the heyday of arcades. The charming setting made for a promising launching point, the audio is excellent, and the story (with smart pop-culture nods and humor) has page-turning qualities to some extent. Hopefully, the next installment, “SUPER ARCADE SPIRITS II TURBO,” will turn out even better.

Despite not reaching its full potential, I still found some entertainment in Arcade Spirits. By ignoring the romantic aspects, I was able to play it as someone with an appreciation of the heyday of arcades. The charming setting made for a promising launching point, the audio is excellent, and the story (with smart pop-culture nods and humor) has page-turning qualities to some extent.