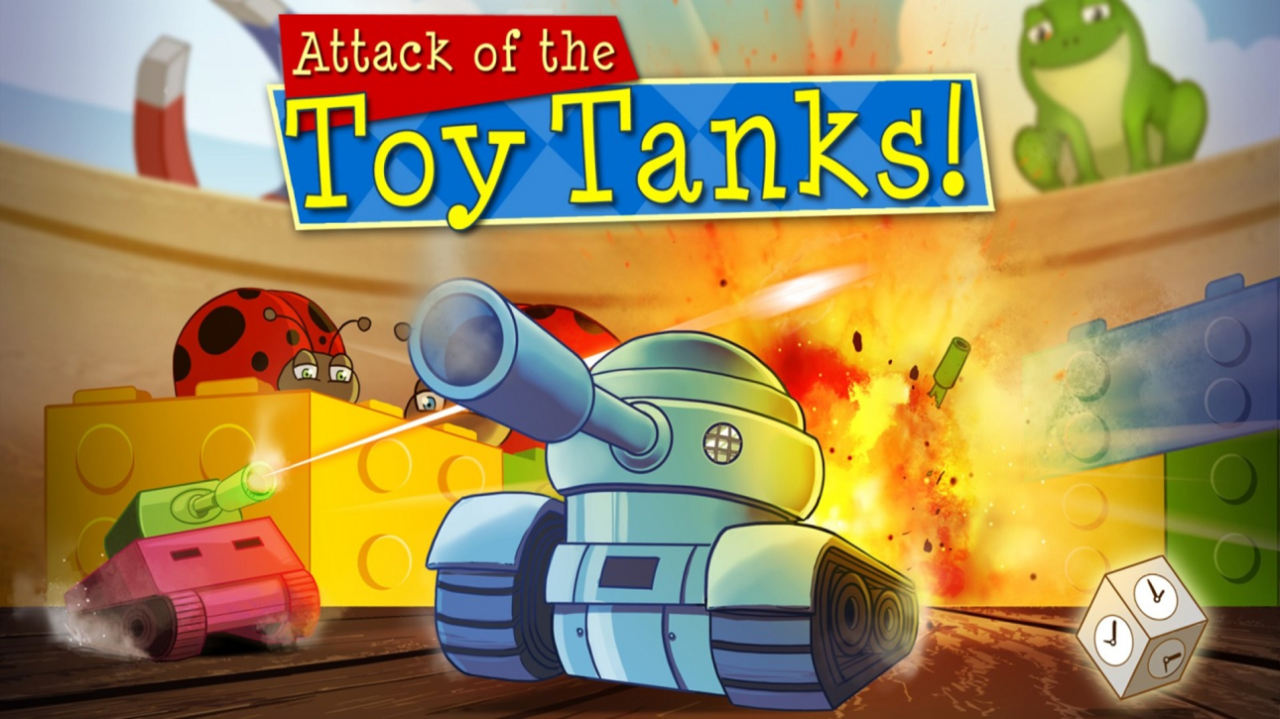 In January of 2015, we reviewed an enjoyable budget eShop game called Toon Tanks. The developer says that Attack of the Toy Tanks is not a sequel to that Wii U game, but it’s so hard not to see similarities between these titles that to call this anything less than a spiritual successor would feel misleading. Unfortunately, it falls short of its predecessor.

Attack of the Toy Tanks offers 60 short, single-screen levels, 25% less than its predecessor. When I say short, I mean short. I can finish a level in 8 seconds and still only earn a bronze rating! Perhaps in an attempt to compensate for the brevity, the AI is unusually difficult. It’s not what most would expect, both from the name and playroom aesthetic. I think it would frustrate most kids (evidently 10+ due to “Mild Blood” that I never did see).

Just because they’re difficult, it doesn’t mean that the AI-controlled tanks are programmed well. At times, I sat the controller down simply to watch my opposition drive in small circles rather than seek me out. They never attack each other, only you, which adds to the repetitive nature. The second you’re visible they pick you off with uncanny accuracy and increased speed. If you were wondering where Hawkeye was in Avengers Infinity War, it wasn’t house arrest, he was driving these tanks! On one level, I consistently died in the first second. Yes, second, not seconds. The challenge here isn’t of the “one more try” sort. It’s more of the “cheap” kind. You’re not even given the option to quit when you fail a level. Instead, you have to hit restart, wait for the opening countdown, pause the game, and then finally select quit.

My strategy often boiled down to immediately running to hide behind the corner scenery, waiting for the enemies to eventually make their way towards me so I could (hopefully) pick them off. Of course, the AI has shots that bounce off walls, curve, and much more, compared to your usual straight shot. The times you have access to comparable firepower are so random, I think I would’ve preferred they been cut altogether. And, “Just in case the AI controlled threat doesn’t offer up enough of a challenge…” there are environmental obstacles as well. They always destroy you on contact, yet the opposition can drive through stationary and rotating lasers.

Thankfully, Attack of the Toy Tanks is non-linear. Had that not been the case I would’ve given up on level 20. It also has multiplayer, a welcomed addition, but it’s one that feels half-baked. It’s only two players, not four, the courses that support it are limited, and it’s just competitive battle with random spawning, not cooperative. So, what should’ve been a big asset feels more like a number of missed opportunities.

Visually this game looks alright, although I would’ve liked to have seen some differences in the environments. What little variety there is really stems from if the level is dark or bright. I found the lighting subpar, but to be fair, this is something I notice in a lot of budget indie games that try to implement darkness. In this case, I don’t think it’s a positive inclusion, as it just adds another element of toughness that the game doesn’t need.

I really wanted to enjoy Attack of the Toy Tanks. But I found the AI poor, something the repetitive level design only emphasized, leading to tedium. Meanwhile, the multiplayer is disappointing in its limitations. Replay incentive is low, due to strict rating time limits, and the fact that you don’t seem to unlock upgrades or anything else. I wish the game’s scope had increased in 4 1/2 years, with more choices given to the players. Still, if seeing Toy Story 4 at the cinema has put you in the mood for toys coming to life, you could do worse than Attack of the Toy Tanks. But you certainly could do better, and Petite Games has – Midnight Deluxe offers superior content for the same $4.99 price.

I really wanted to enjoy Attack of the Toy Tanks. But I found the AI poor, something the repetitive level design only emphasized, leading to tedium. Meanwhile, the multiplayer is disappointing in its limitations. Replay incentive is low, due to strict rating time limits, and the fact that you don’t seem to unlock upgrades or anything else.