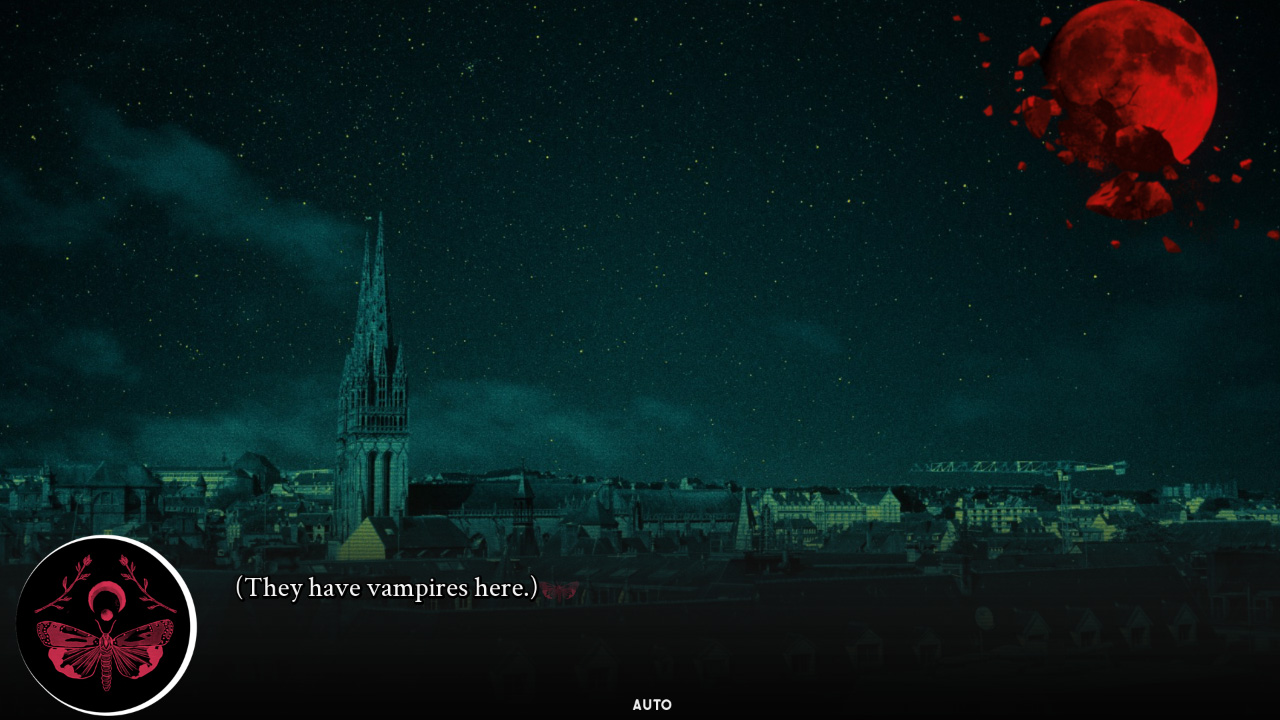 The blood moon rises once again.

In a world where humans and vampires co-exist, the visual novel, Cross the Moon, follows three separate characters whose stories intertwine. The story starts at a bar in a French town called L’Amour, where vampire Lux talks with his friends Apollon and Corentine about who their next victim should be. Lux (a primary character of around 25 total), is chosen to chat with a man across the room in an effort to convince him to let them drink his blood. Due to Lux’s’ “mesmir”—which is like a brainwashing system vampires have—the man agrees, and the three friends get to drinking. 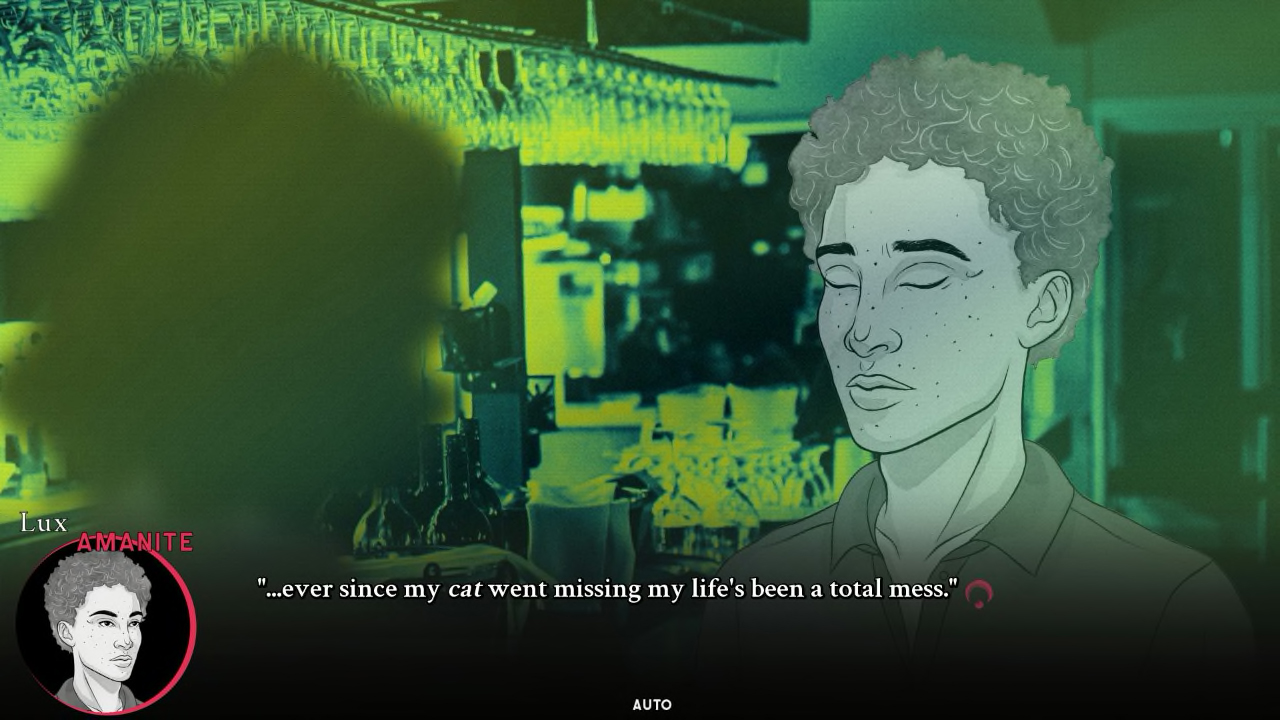 This, of course, leads to the bigger picture. But before anything else is revealed, the story introduces you to Aurore, another vampire. She seems to be meeting up with a stranger who offers her vials of pure blood. Aurore ultimately decides to decline the blood, as she needed to get home in time to get a good rest before her interview at BloodFLOW, a shady corporation that makes artificial blood for vampires.

The last character the game focuses on is Ryouko, an investigator from Japan who is now working in L’Amour, having been exchanged with a French investigator. Her role is to help police vampires, as they are not seen as equal to humans and have many disadvantages handed to them by the law. However, on her first day at work, she’s put on a murder case after finding of a corpse whose eyes have been removed, chest stabbed, and neck bitten. 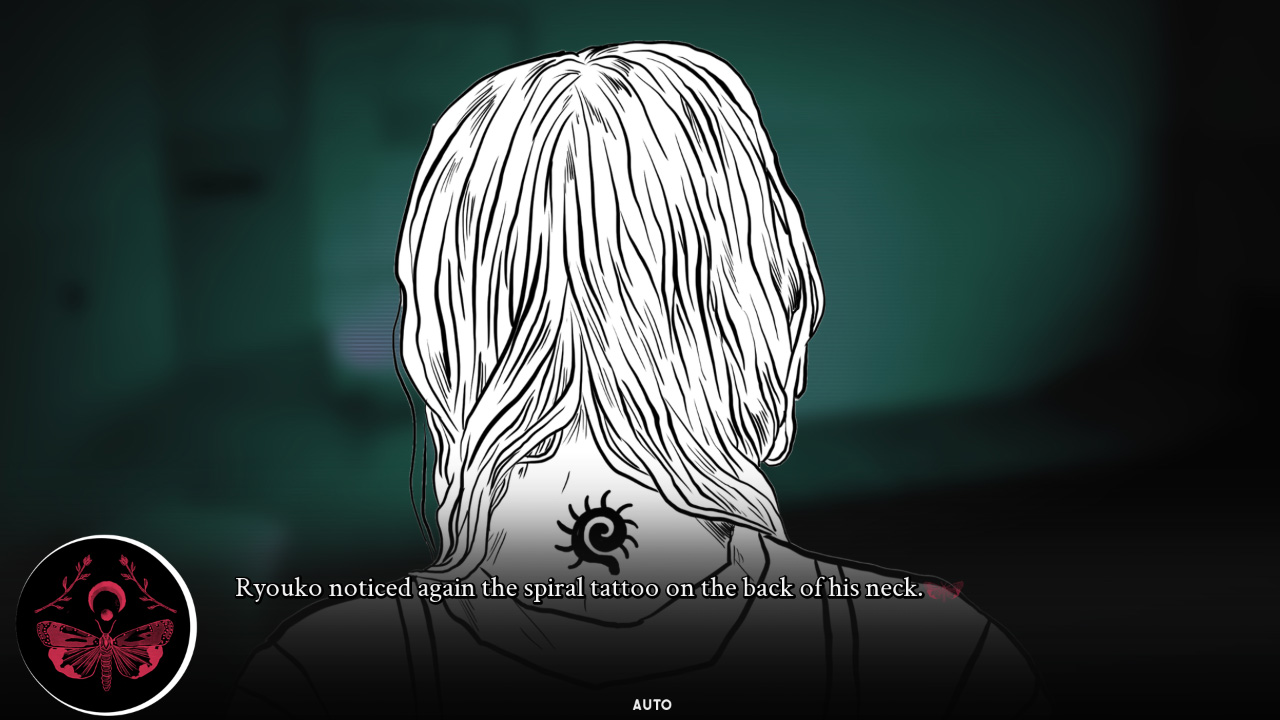 This all combines for a promising setup, but I can’t really go any deeper without spoiling anything. This is because the interesting story—one that deals with both modern and fantastical problems—is all Cross the Moon aims to offer. There are no decisions to be made in this game, and nothing to interact with. The only thing you can really do is read. And depending upon how quickly you do so, you’ll be finished in around eight hours.

Cross the Moon’s narrative is enhanced by super nice graphics. Combining real life photography as backdrops with black and white illustrated characters adds a cool effect to the game and story. The photos also have filters with shaded colors that help contrast the black and white characters. 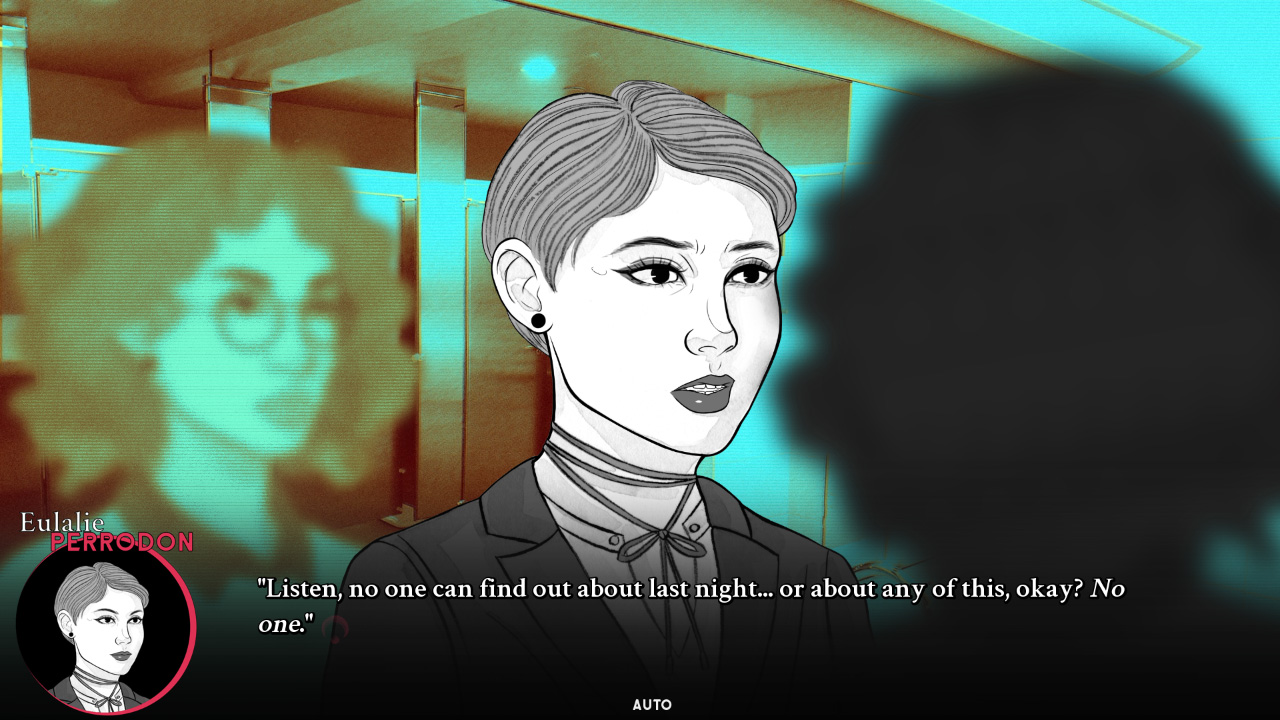 The music in the game was also great as it doesn’t distract you from reading, but also isn’t too boring.

It all comes together to create a visually and thematically engaging visual novel. But with no actual gameplay elements, is it worth it on the Switch? With an asking price of only $5, it is less expensive than a book. It also gave me much more to contemplate than many of the novels I’ve read lately.

If you’re willing to view your Switch like a Kindle or iPad, Cross the Moon is worth the read.

With no alternative endings (again, there are no decisions to make, so no way to split off the narrative), it’s one-and-done with the visual novel Cross the Moon. But it’s priced accordingly, and should be an interesting read for fans of mysteries and the supernatural.