The curiously named Cutie Pets Pick Berries (which from here I’ll abbreviate as CPPB) is a very simplistic game with a puzzling hook. The hook however doesn’t stem from the gameplay, but rather the window dressing.  It’s through the use of Mandeer.  No, not the town in the Punjab province of Pakistan silly, but humanoid deer! Because of course these are common pets, alongside cats, dogs, goldfish, etc. The game uses these, strange to say the least, creatures in both background graphics and Miiverse stamps.  This bizarre concept actually does manage to leave something of an impression, but the game itself just isn’t a good one. 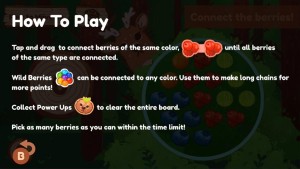 Before I embellish on that though, let me talk briefly about the simplified gameplay.  It’s basic as can be, having you connect matching berries with the stylus.  Even though the timer will increase in speed, the tasks remain the same throughout.  You get a point for each small screen cleared, although your score will increase depending on your speed and such.  Outside of two powerups which add little, that’s all there is. With no variation at all, how soon before you’ll grow bored?

Of course considering the purpose of CPPB is high scores, you’d be right in expecting leaderboards.  Sadly there are none, either online or even local, which which means replay value isn’t here either. There’s eShop titles selling for half the price of this game that do have leaderboards … even online ones! 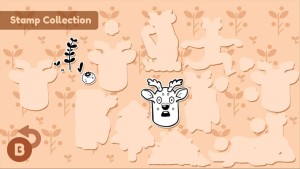 Granted, scores can be shared via Miiverse.  Unless you post directly from within the game though, screenshots can’t be attached.  The Miiverse stamps unlock at a slow pace, and as the content is so light, the time investment needed for them is questionable.  Nevertheless, presuming you like them, the stamps are actually used here in reasonably effective ways, drawing attention to an otherwise subpar game.  The Mandeer in come-hither poses are … well let’s just say it makes me curious as to the developers design thought process.  Of course this is the same company that published an eShop game about a robot stripper with laser nipples.

The Mandeer also are a permanent display on the TV, a complete waste since you’ll be looking at the GamePad.   Miiverse messages are displayed too, but again it’s useless since the gameplay is entirely limited to the GamePad.  It’s odd on so many levels, and quite frankly is just another area reflecting poor game design. 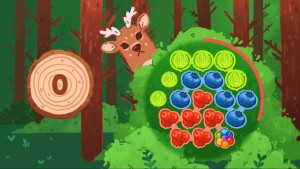 There’s no change to either the graphics or music.  While neither are terrible, repetition will invariably set in, and probably quickly.  There’s also no difficulty settings.  You might quit out of boredom rather than challenge.  In truth, there’s no options of any kind.  Was there a genuine shortage of content ideas, or was this title just rushed?  It feels like one mini game within a larger puzzle compilation.  There’s not nearly enough substance here for a standalone release.

CPPB is an exceedingly dull game with threadbare content.  It’s made slightly more interesting by its bizarre theme and use of Miiverse stamps, but that’s about all.  I’m not sure I’ve found a $4.99 eShop with so little to offer.  Consider a patch and price drop an absolute must before thinking of adding this to your wish list.

The Mandeer deserve better than this paltry offering.