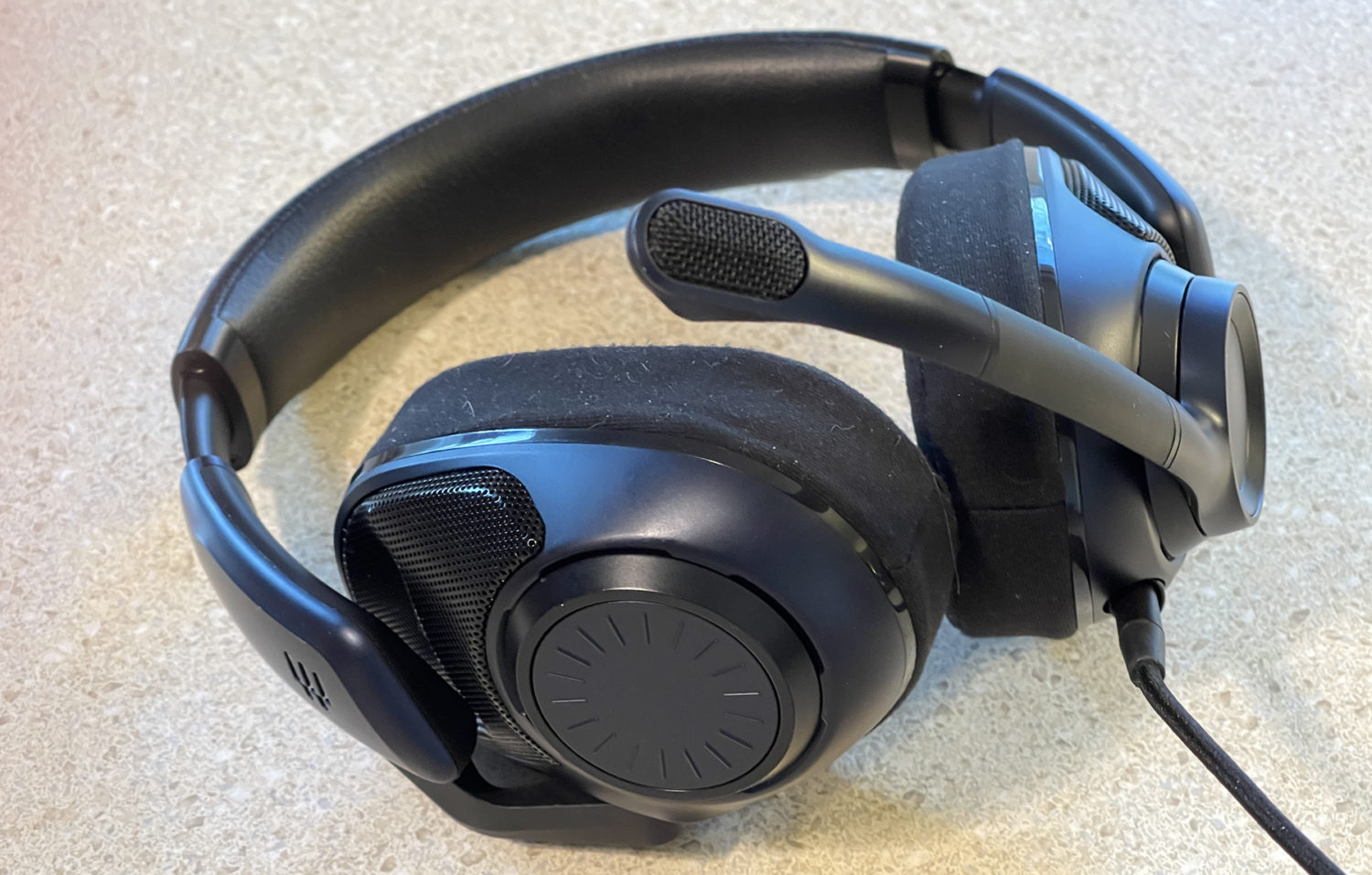 You don't need to be a gaming pro to want pro audio.

EPOS has been on my headset radar since they offered Pure Nintendo the opportunity to review their GTW 270 Hybrid wireless earbuds. Their parent company, Sennheiser, had been on my radar for years, so I wasn’t surprised by the excellent quality of these earbuds.

I’ve now had the chance to spend some time with the H6Pro over-ear headset, and I was equally pleased.

The quality begins with the physical appearance of the H6Pro. Available in three color options, the metal and plastic build works well aesthetically and structurally. The unit never feels flimsy or loose when wearing, and it’s sturdy enough to withstand typical gaming and transportation abuse. The memory foam padding of the earcups provides a soft touch, and the cans are wide enough to allow even larger ears to fit fully inside. The metal headband is nicely padded as well, but you’ll still want to adjust the sizing so it doesn’t press too hard on the top of your head. 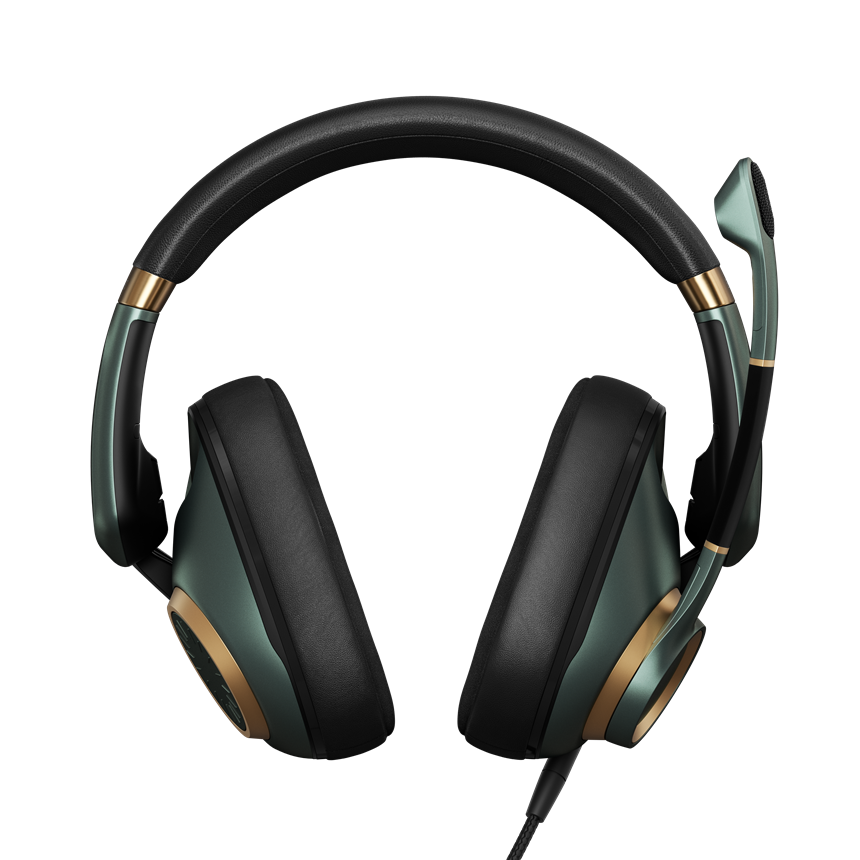 Another great physical feature is that EPOS seems to understand you’ll want the headphones to work for more than just gaming. Most headsets will allow you to push the mic up out of the way or even slide into the earcup. The H6Pro, on the other hand, allows you to quickly detach the entire mic. It’s held in place with magnets that allow for easy removal, but they’re strong enough to hold it firmly in place during use. 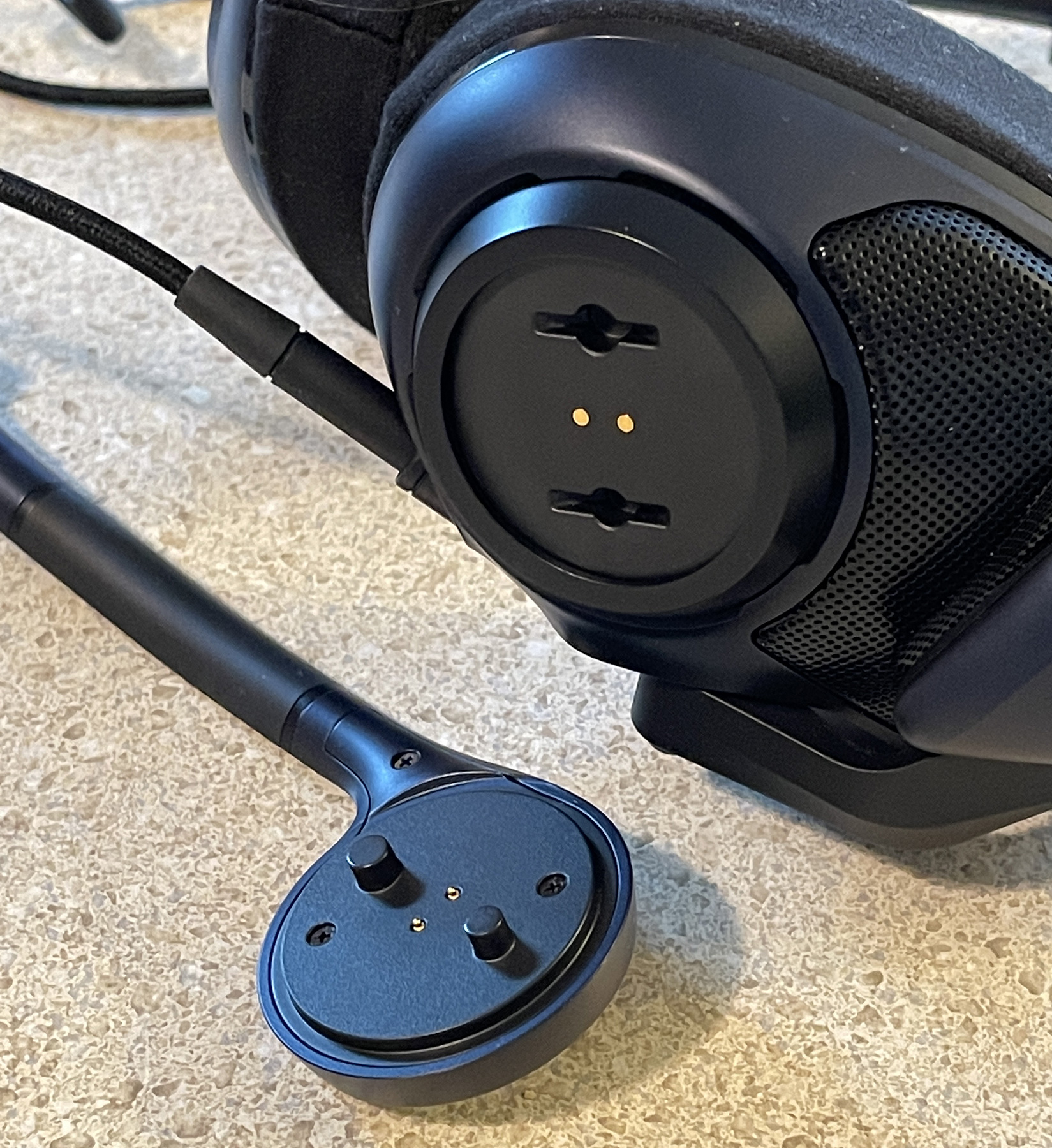 And when you aren’t using the mic, you can replace it in the connecting area with a magnetic cover to make sure the headset doesn’t look busted. You’ll be managing various removable parts to keep everything looking good, but we’ve all got to accept some responsibility, right? And if you should lose or break anything, the ear pads, cover, and microphone can all be purchased separately for replacement.

While the microphone attaches to the left earcup, the right side sports a circular volume control. This large dial makes it very easy to adjust sound level with a simple spin of your finger or thumb during use. Other than that, the H6Pro has no buttons or dials to mess with, allowing the unit to look sleek and minimal. 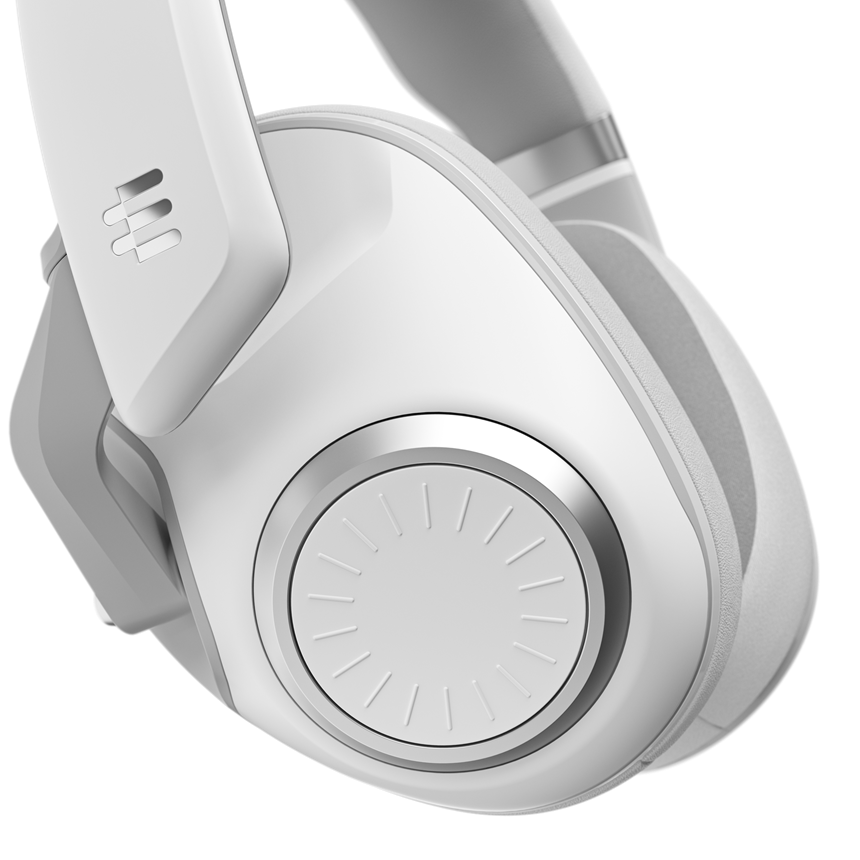 This all works in tandem to provide a functional setup that’s comfortable for prolonged use, with one possible exception. The large ear cups don’t squeeze against your head, but they are snug. As such, if you wear glasses, the H6Pro will press the arms tightly against your head. This issue is inherent with most over- and on-ear headphones, but can be alleviated with flexibility in the hinges where the headband meets the cups. There is some flexibility with the H6Pro, and they naturally want to squeeze in from the bottom, not the top. Still, it’s something to consider when determining what style of headphones you prefer to use. If you have the opportunity to wear these for a bit before buying, do that.

None of this would matter if the headset didn’t offer solid performance, but no worries there. The mic does a great job of picking up your voice while eliminating extraneous audio from getting through. Those I played with confirmed my voice was coming through clearly. And when you want the mic off, you simply need to push it up towards the headband…no need to fully remove it, despite having that capability.

The audio is just as good, although I should first mention there are two models available for the H6Pro: open and closed acoustics. Simply stated, the closed acoustic model helps to block out external audio, while the open model allows that audio to filter through. If you tend to game at home where you want to hear what’s going on around you, open acoustic is the way to go. If you’re playing on the bus or airplanes, however, closed acoustic is the better option. EPOS provided us with the open acoustic model for review purposes, and I quickly grew to appreciate the technology. 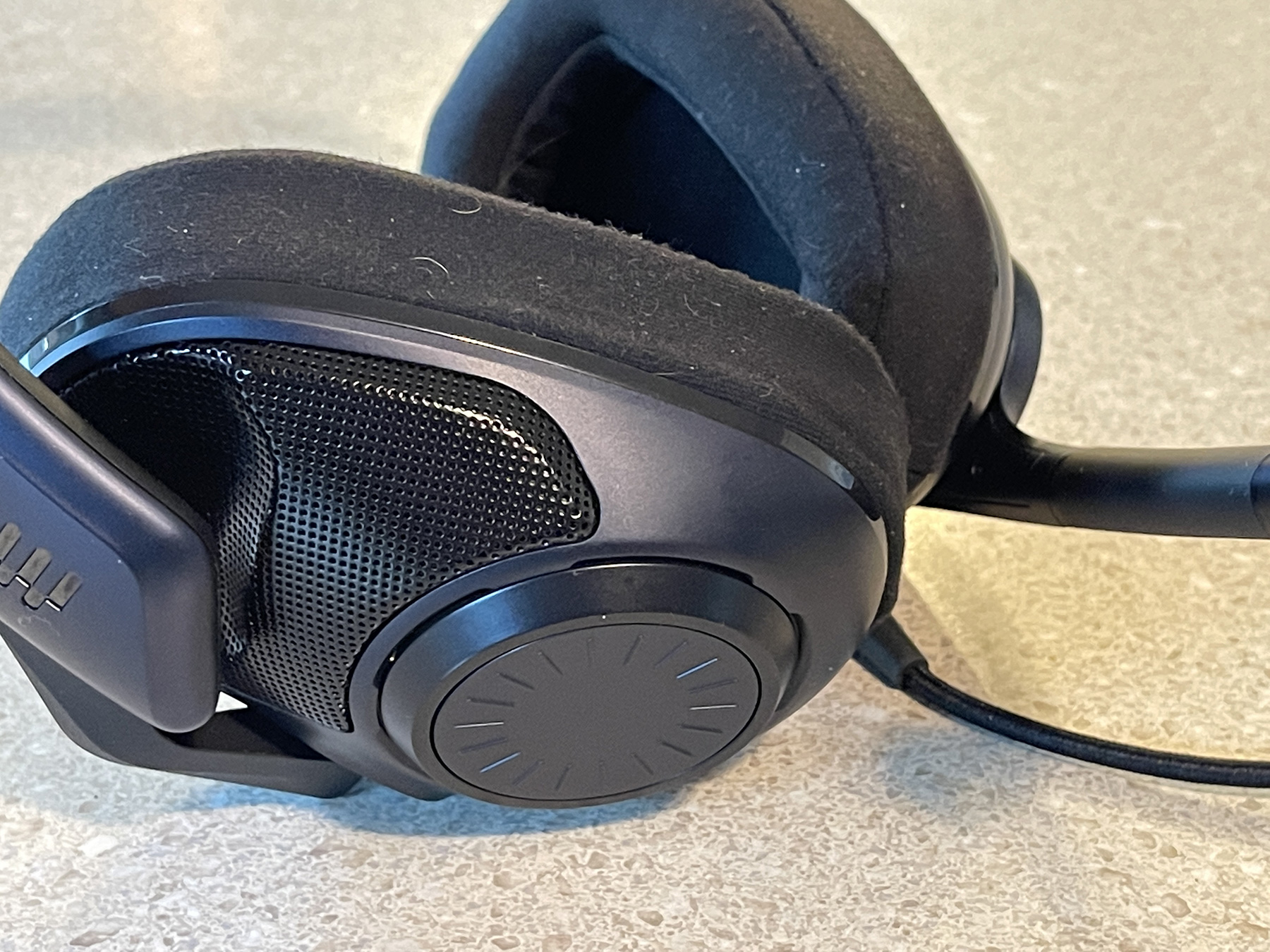 The open acoustics prevented the headphones from becoming oppressive over time, allowing me to wear them for longer periods than I otherwise would have. Also, being able to hear my family while not making them deal with the sound effects from, say, Shin Megami Tensei V was kind of wonderful. On the other side of the speakers, I liked (usually) not having to repeat myself when getting my son’s attention as he was playing.

The aforementioned sound effects, by the way, sound great with the H6Pro. The large ear cups do a great job of giving the audio the room it needs to get deep and full. I expected the big, violent effects to be impressive, and they were, but the headset really shines at allowing you to hear the more subtle audio cues. Ambient effects that tend to get smashed together and muddied in lesser headsets or earbuds were allowed to clearly separate here, creating a more immersive and entertaining experience. The same can be said of in-game chats; the voices of other players felt like they were coming from the same room, not from within the game itself.

At $180, the EPOS H6Pro is a somewhat pricey headset option. It’s also an option that’s definitely optimized for gaming, and therefore doesn’t make much sense for music when the need arises (especially the open acoustic model). But if you’re looking for an impressive plug-and-play headset that checks the majority of gaming boxes without fuss, it’s a great way to go.

Available in open and closed acoustic models, the EPOS H6Pro gaming headset provides outstanding audio and physical quality to Nintendo Switch gamers with plug-and-play convenience. The quality and functionality come at a price, but a half-hour of gaming is all you’ll need to justify the purchase.