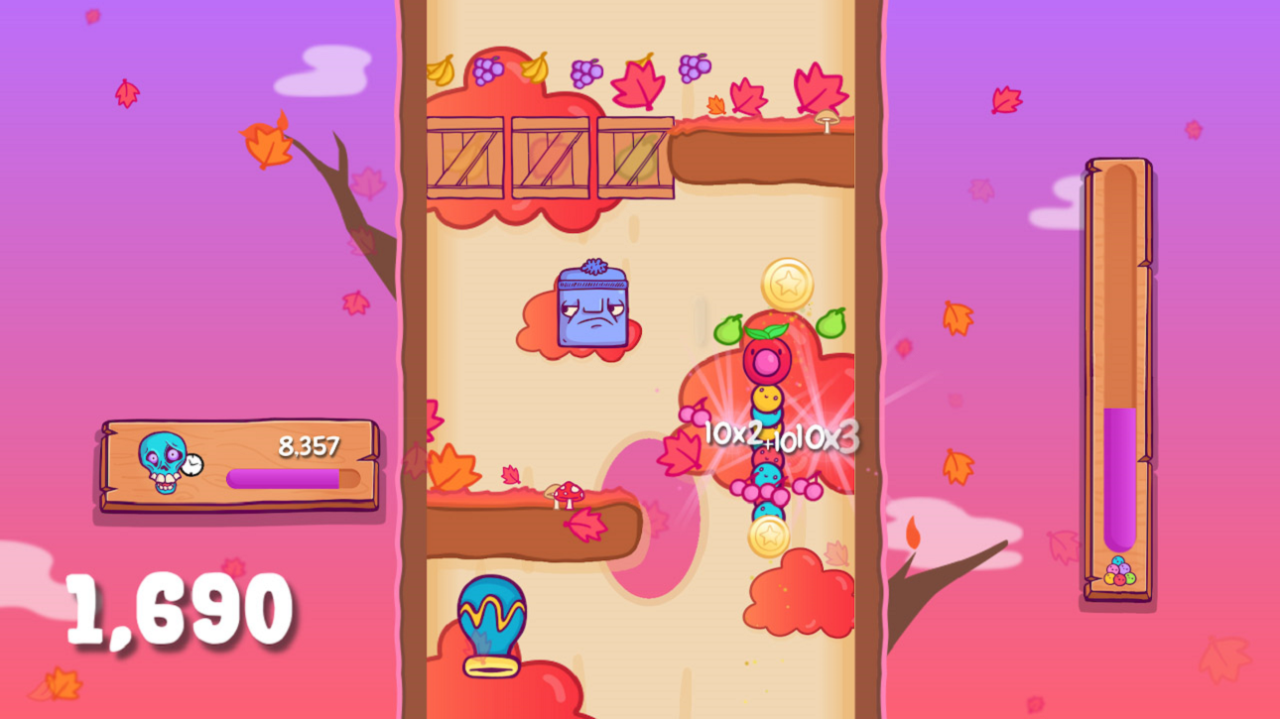 Although I wasn’t impressed with the trailer (sorry, not a rap fan) what ultimately made me claim Family Tree for review was my fondness of most things pinball related. A “relaxing pinball platformer” sounded like the sort of experience I could really enjoy. But, in the end, I only kind of enjoyed this one.

I think it boils down to the fact that this game doesn’t really feel like pinball. Thus, it was marketed in a way where I expected something that wasn’t delivered. This doesn’t make Family Tree a bad game, just one that didn’t meet my expectations.

The physics-based action has you aim and shoot Mr. Fruits up vertical levels within the confines of a tree. The goal is to rescue all of the Fruits family kids, maybe grab some coins, and try to do it as quickly as possible. I don’t think the timer really adds anything to a game like this. Since I didn’t feel like fighting the clock, I mostly ignored it; if I happened to finish early, it was a bonus.

Pinball has never been this narrow. The tree leaves a lot of wasted real estate on either side of the playfield.  The bonus stages, played horizontally, feel even less like pinball. Family Tree has a bit of an identity crisis.

Beyond the main game, there are extras like challenges and an endless mode. The challenges are basically achievements, which you accomplish during the course of the main game. In endless, the camera can struggle to keep up with the action.  Neither adds the addictiveness that I expect from a good pinball game, so you might not play this one much after beating it.

Multiplayer (for up to four) should add some legs, but it’s competitive only. The speed emphasis makes the aforementioned camera issues come to the fore. In general, it feels more like a tacked-on addition. After a few rounds, we’d had our fill.

What has kept me playing solo, to an extent, is trying to 100% each level. The menu could use optimization for this, as I dislike having to finish a level, quitting back to the main menu, and reselecting. Especially when I’m just playing for a few minutes at a time.

What’s a real shame about Family Tree is that it looks like a cheap mobile game.  The backgrounds are well-animated and lively, but it’s the artwork that’s weak. It also results in the levels that end up mostly looking all the same, even in different seasons. I wish something would have been done in the style of the devs earlier game, Rogue Aces, to make Family Tree look more like a proper console game.

Family Tree is entertaining enough in its own way, but it’s not really a “pinball platformer”. Though not much to look at, this physics-based action game still has its moments here and there. It controls well, and high score chasers might be entertained, but this just isn’t the sort of console game that will hold your attention for very long.

Family Tree is entertaining enough in its own way, but it’s not really a “pinball platformer”. Though not much to look at, this physics-based action game still has its moments here and there. It controls well, and high score chasers might be entertained, but this just isn’t the sort of console game that will hold your attention for very long.