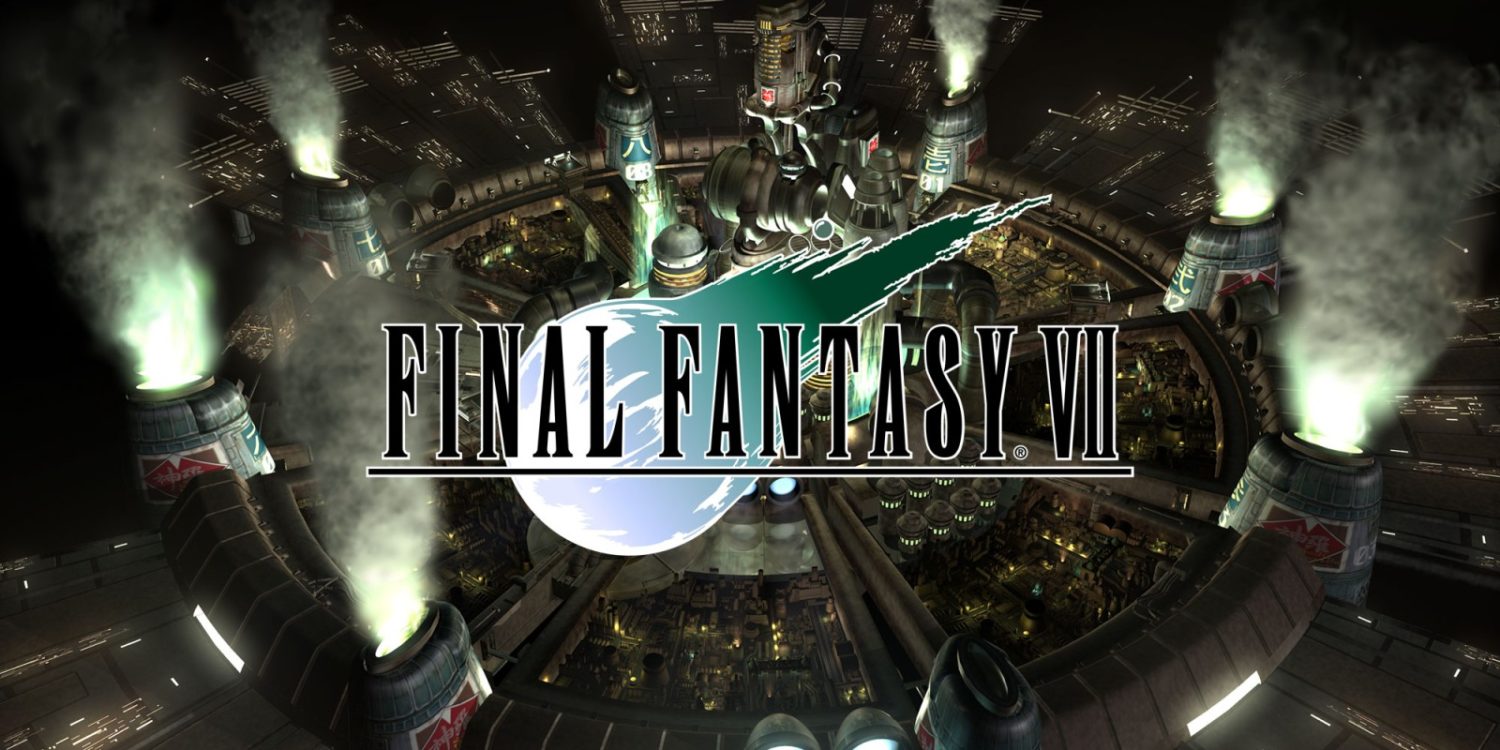 Why this game? Why has Final Fantasy VII (FF7) not only lingered in the minds of players, not only had a remastered version announced, but been released over and over in its original form? Oddly animated and built into a deeply strange world, with at-times baffling level design and a story that oscillates wildly between the operatic and the absurd, FF7 remains a compellingly weird role-playing game that has an astonishingly deep story to tell. 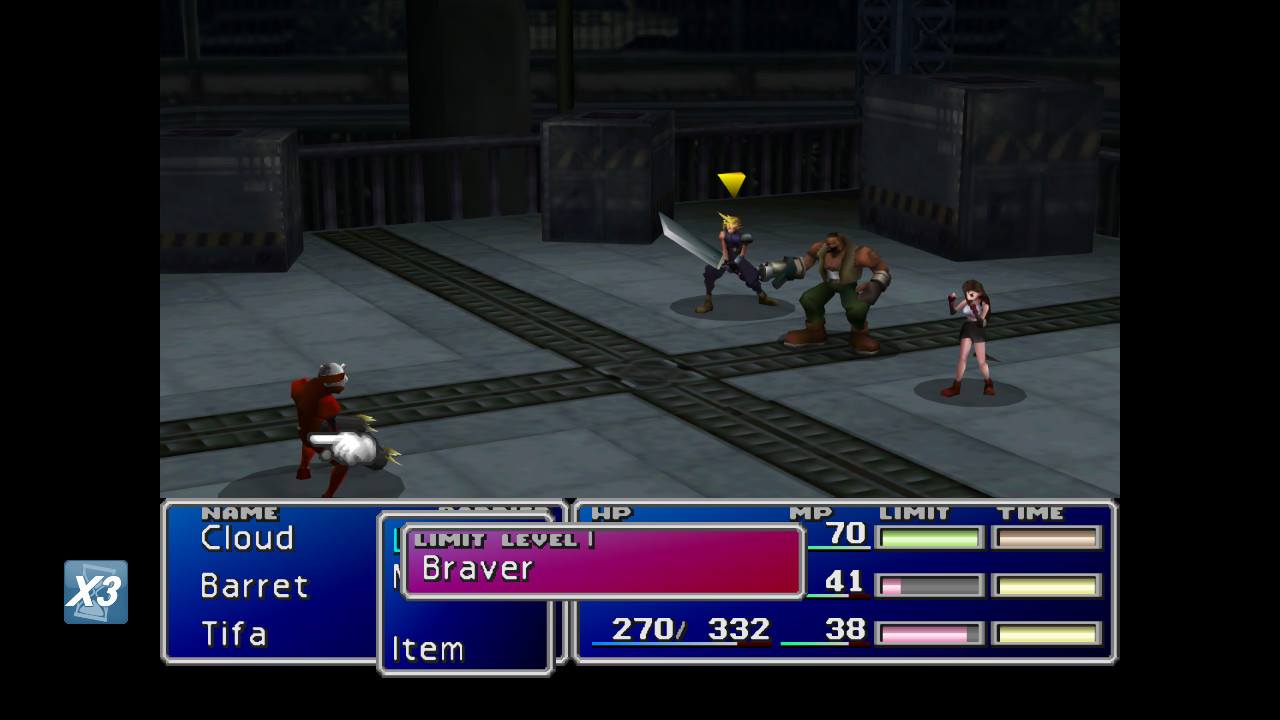 Now, FF7 is a game that appears frequently on “Greatest of All Time” lists, but I’m going to try to take a look at it through fresh eyes as someone who played it (at least part of it) on its original release and also someone who hasn’t played any Final Fantasy games since then. Let’s break it down into the Good, the Bad, and the Weird. 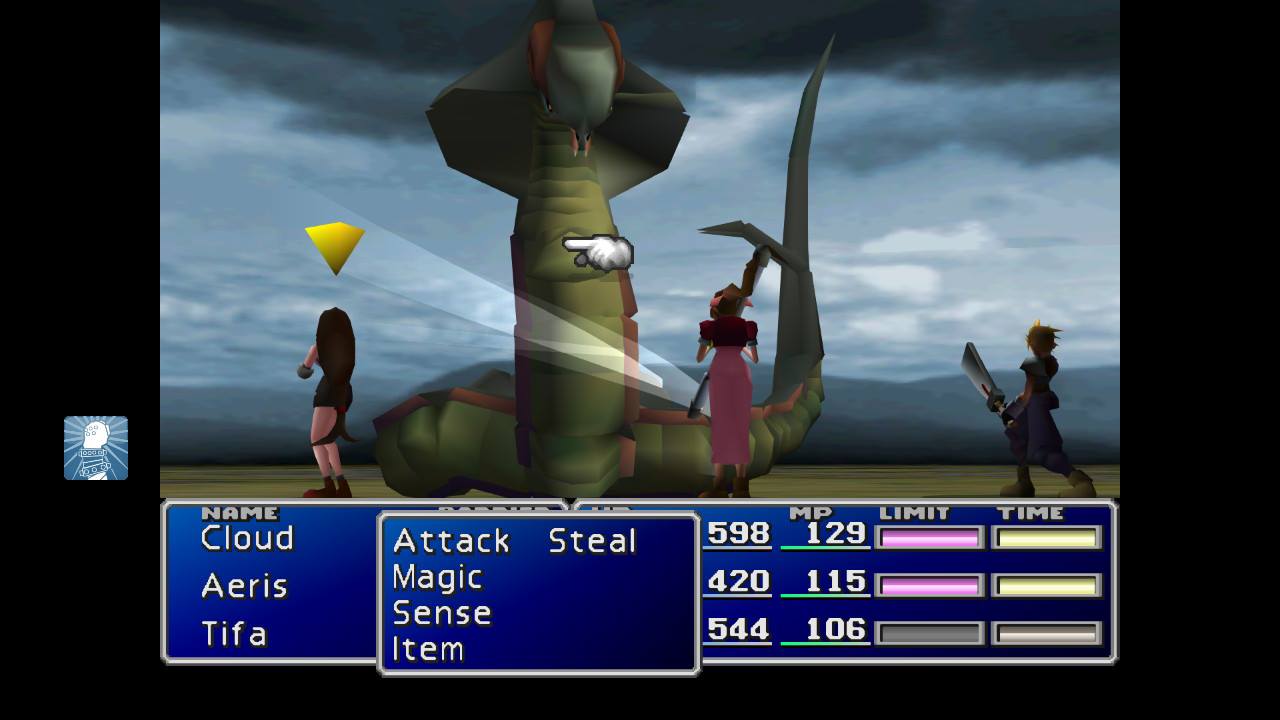 FF7 is fondly remembered for a reason: its characters and story, even if both those elements are initially murky and slowly–slooooowly–teased out. Almost without explanations, you’re dropped into Midgar, a city that’s also an industrial mining plant built on top of another city, where a group of eco-terrorists (the good guys) has hired a mercenary named Cloud Strife to help them blow up a reactor that’s draining the planet’s life force. Cloud, complete with spiky hair, bad attitude, and a sword twice as long as his body, is the hero of the game and your main character. He also, of course, has a Dark History (™) that ties directly into the main plotline of the game. 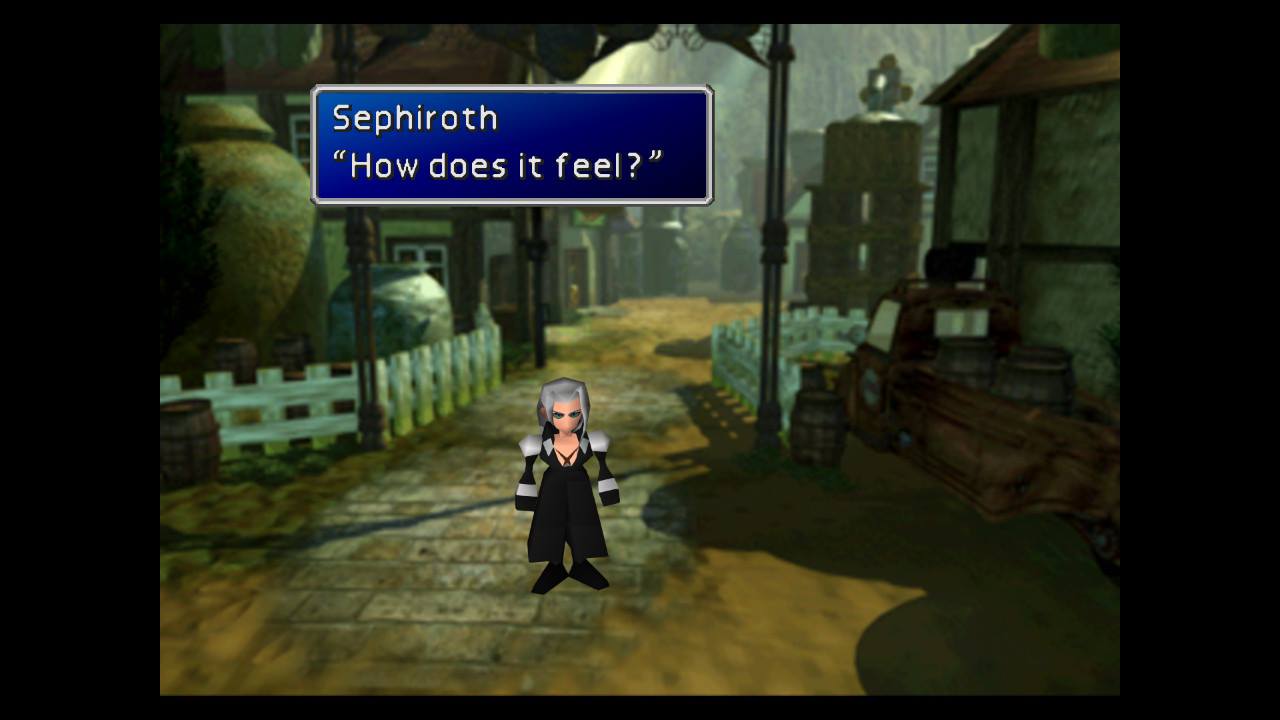 Rounding out the main cast of playable characters who will join and leave your party are Tifa, your childhood friend and one heck of a brawler; Barrett, the gruff-but-endearing leader of the group, and Aeris, who seems to be a simple woman who runs a flower shop, which in any Japanese Role-Playing Game is a dead giveaway that she’s much, much more. Other playable characters will float in and out of your team, including my favorite, Red XIII, a genetically modified test animal who can talk, but those four make up the heart of the story.

The saga of Final Fantasy VII is the story of how one world-shaking event, the destruction of the Midgar reactor, is actually just the first flap of the butterfly’s wings for a series of oncoming calamities that will cause our heroes to not only flee their city, but to explore an entire planet meeting strange and wonderful new characters, learning more and more about their own histories, and of course, saving the planet and all life from utter destruction. 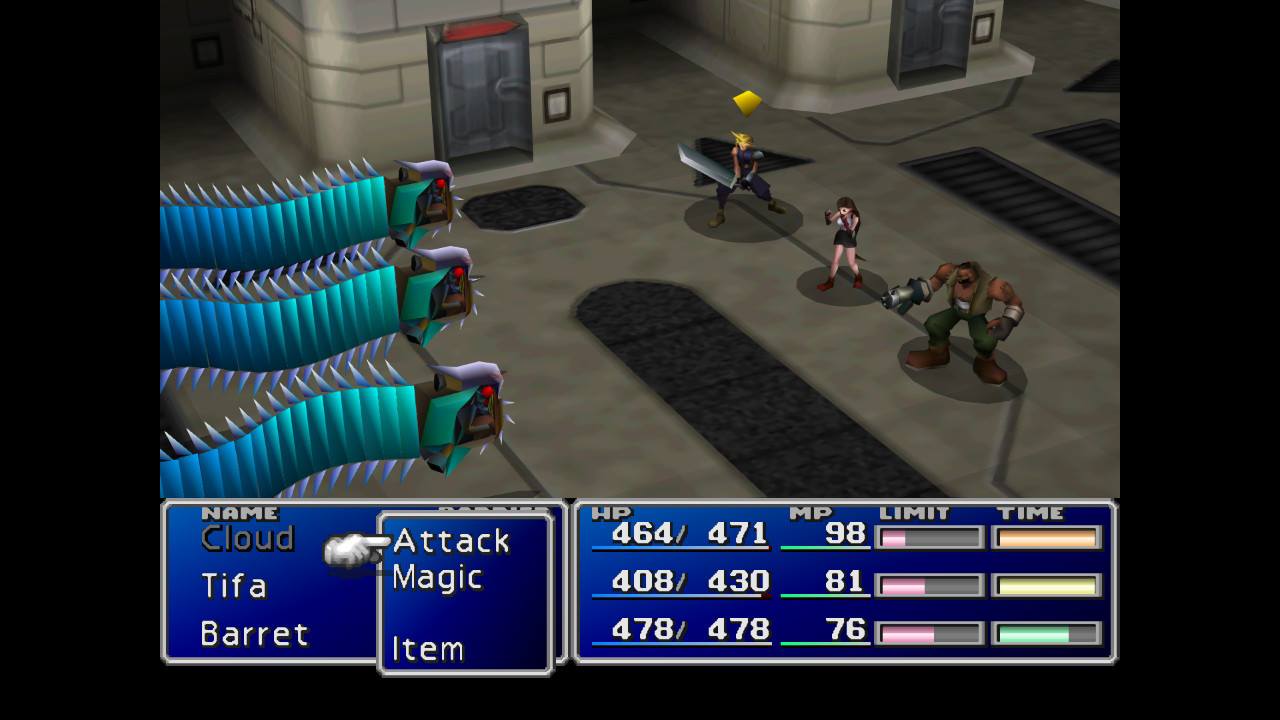 That this story is so compelling is all the more remarkable because it’s told almost entirely in pop-up dialogue boxes with only a few that give you the option of a response. The game has no voice actors, and even the few full-motion video cutscenes are wordless. But the genius of the game is the way the designers managed to make these crude, blocky characters (more on that in a moment) to be incredibly expressive.

Cloud may be made up of like, 12 boxes, but I can tell when he gets embarrassed, even in a wide group shot. When Barret gets mad (which is often), he starts boxing the air until he wears himself down. The game manages to use the large, almost pantomime motions the characters are capable of work with the story because the story is so full of those simple emotions, rage, regret, hate, love, that they end up looking not ridiculous, but operatic. 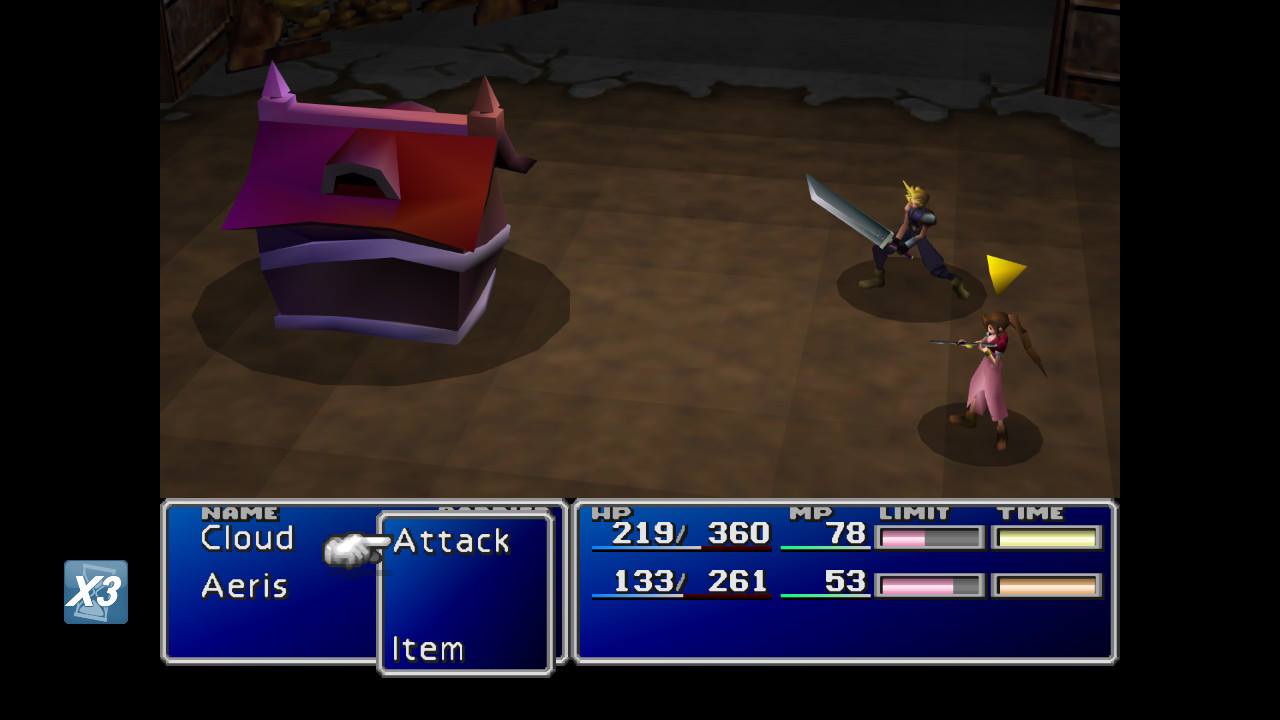 Combat is simplistic in the beginning but gets more complicated as your characters gain power and options in battle. FF7 uses a mixture of time- and turn-based combat, your party faces the (usually random) group of monsters on the other side of the screen, and you choose which attacks and actions you’ll use against them, while the AI picks its attacks randomly. The difference here is that there’s also a timer built in. You can’t take actions until your TIME bar is full, and while you’re figuring out which attack to use from a drop-down menu, your opponents are free to attack once their bar is full. 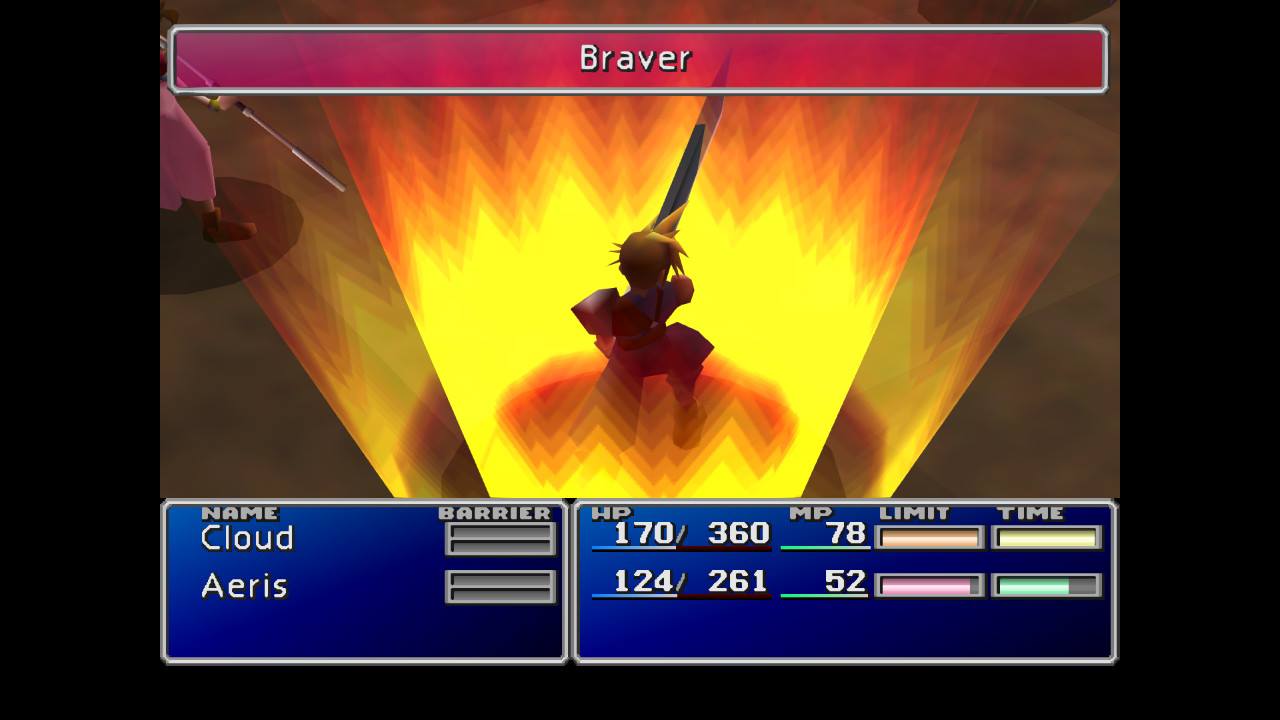 Beyond basic melee and missile attacks, your characters can also use items (like grenades or healing potions), Magic attacks, and optional skills that will clue you into enemies’ weaknesses or even steal gear from them. Finally, each character has their “Limit” skills, powerful attacks that can be unleashed once they’ve performed enough of the regular attacks. Once you start to get multiple abilities available to you, combat becomes a much more measured affair, especially in Boss Battles, where knowing what attacks to use and when to use them become crucial to winning, or losing the game and starting over at a save point. 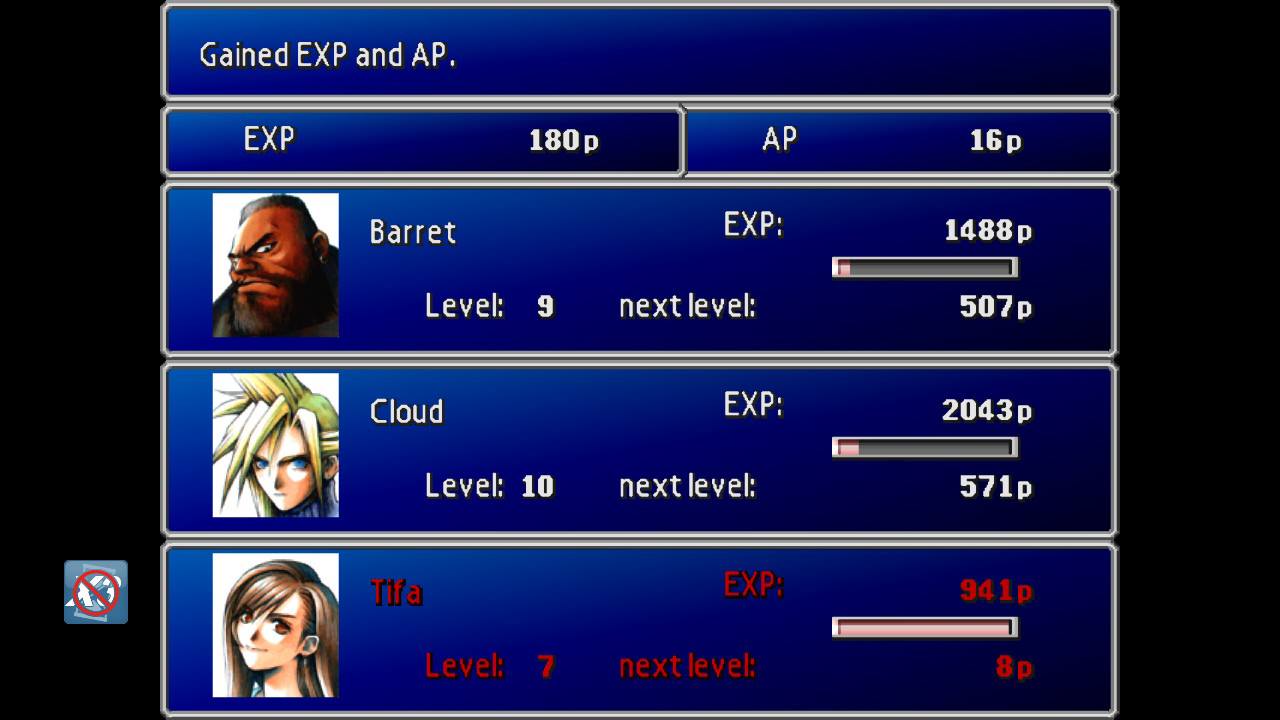 Which brings us to:

This release for the Nintendo Switch is an almost-direct port of the original 1997 Playstation version, and while its retro graphics are still inspiring fans who love the look of that era, the design presents several problems. While the characters are made up of blocky polygons, the backgrounds are still images that are low resolution by modern standards, meaning that navigating them can be a problem. Is that a ladder I can climb or just something the illustrator thought would look cool? Why is the character able to wander off-screen into concealed areas with nothing in them? All the other glowing portals on this screen are doors, why isn’t this one? Be prepared to spend a lot of time wandering around trying to find where the exit may be.

Another throwback is the Save Game system. When you’re traveling the world between cities, you can save whenever you like. But once you enter a location, you can only save at strategically-placed question marks. And you should save every chance you get because there’s no guarantee you’ll be able to get back to them after a big battle, leaving your already-weakened party vulnerable. More than once I took down a boss, got pulled into a random encounter before I healed, was wiped out, then had to go back to a save point and re-fight the boss. Not to mention the later boss battles that have multiple stages. Lose one, and it’s back to the start.

There’s a point to be made that modern games coddle players too much, making it impossible to truly “lose,” but when I go back and play games with save systems like this, I have to say I don’t miss it at all.

Finally, we get to:

FF7 comes from an era before when video games, even big, expensive ones like this one, were carefully managed “brands.” It has all the cool stuff you’d expect from an RPG, like a sweeping plot where the fate of the world is in your hands, cool weapons, and unforgettable characters.

It also gets really weird, and without warning.

There’s a point where, to rescue Tifa, Cloud has to dress up like a woman to infiltrate a mansion. That’s not the weird part. He has to find a drunk dressmaker and convince him to get back to work. That’s not the weird part. He has to get a wig by going into a gym and winning a contest by doing squats. That’s kind of the weird part. To get his makeup done, though, he has to go into a “club” which is clearly a brothel (complete with opportunities to peek through keyholes to glimpse what’s going on in other rooms). The only room Cloud can get into is the “group room” however, where he’s joined by a large group of muscle men who want to “exercise” and take a bath with Cloud before gifting him a pair of bikini briefs as a memento. 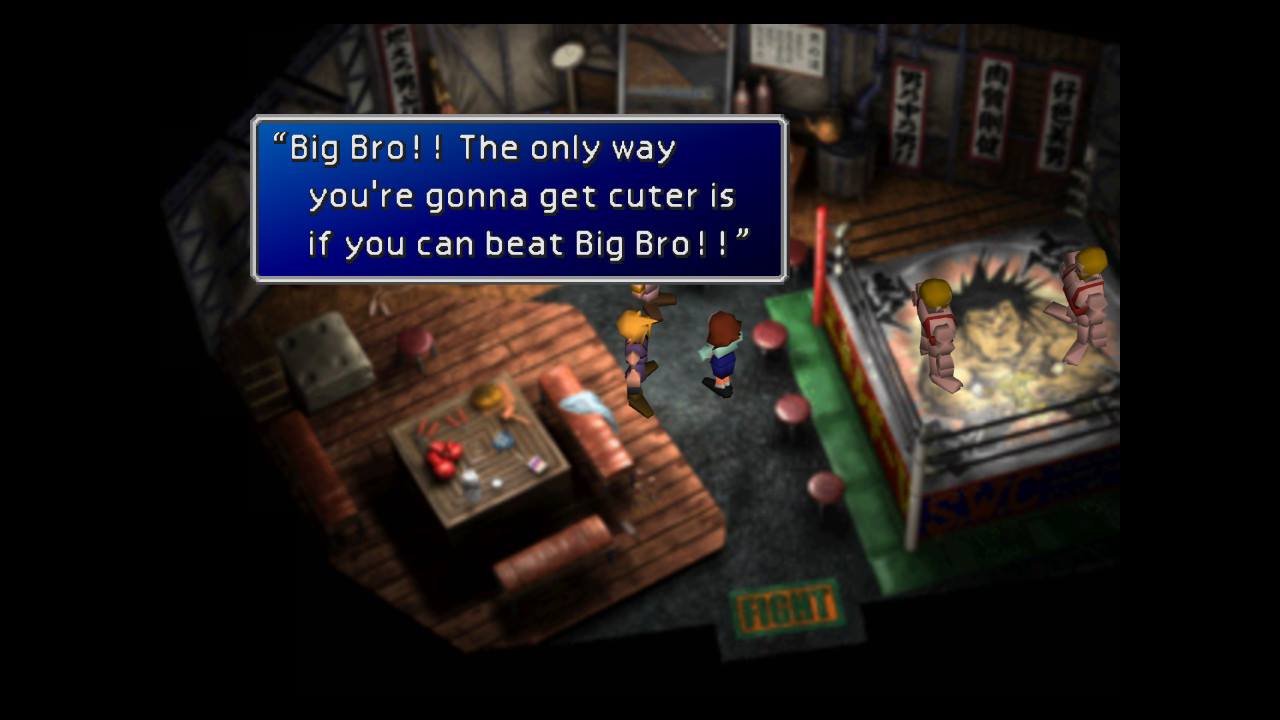 When’s the last time you saw that in Call of Duty?

Weirdness is baked into FF7, and nowhere more so than in its enemies. If you’re in a building, you’ll be battling corporate security and their robots. But why am I being attacked by a house that fires missiles in a sewer? The monster designs are always interesting to look at, but they’re absolutely baffling.

Is this 22-year-old game worth your time? Absolutely. There’s a reason why it’s being re-released for cutting-edge systems, and if you’re willing to engage with its idiosyncrasies, old-school mechanics and graphics, and interface oddities, there’s a frankly wonderful story that will grab you while also allowing you to understand how many other games it has influenced.