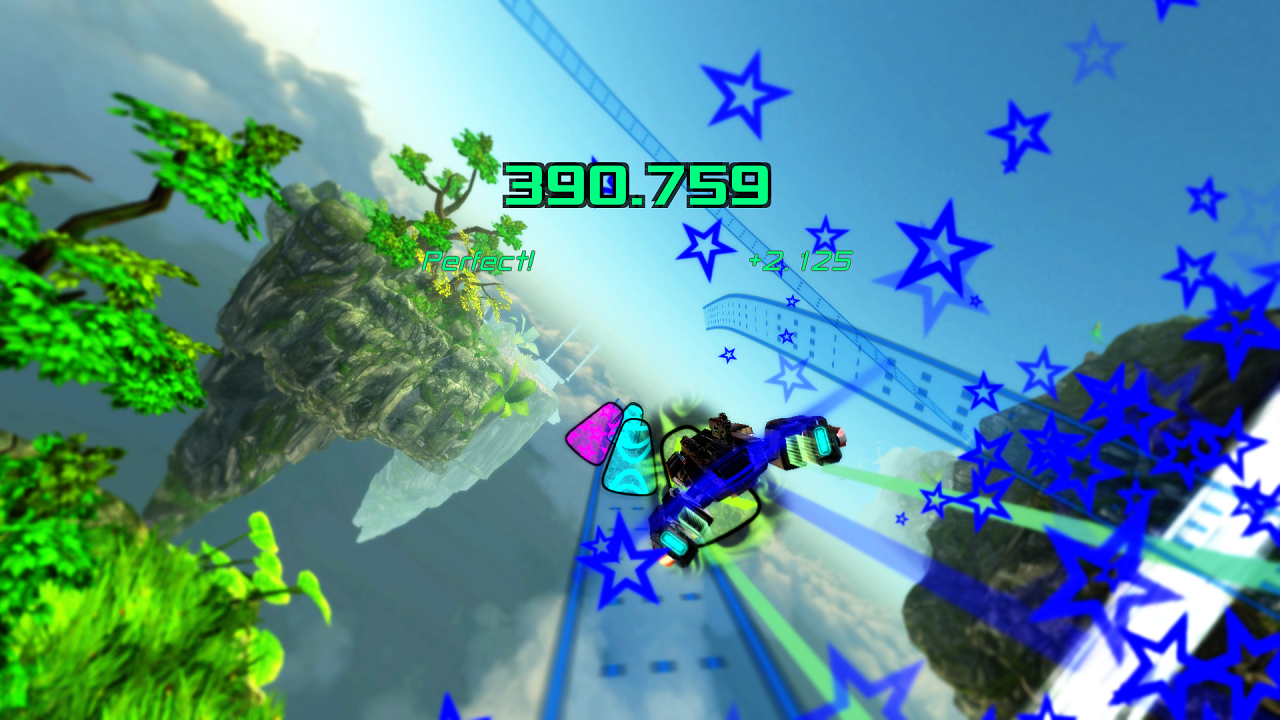 Flight of Light is the latest game from Crystalline Green. The studio’s prior release, Totem Topple, didn’t really strike a chord with me – much to their credit, they did improve the game with updates. I ended that review stating, “I wish them more success on their next game, Flight of Light.” Mission accomplished? Let’s find out.

First off, major props for seeing this Kickstarter success actually release on the Wii U. Not canceling or moving the project is almost worth a point alone. But what exactly is Flight of Light? I’m going to take this description from the game’s KS page… “A combination of rhythm and racing genres, in Flight of Light, you fly on rails along a rollcercoaster [sic] -style track, moving from side to side in order to hit coloured “notes” coming towards you in time to the music.” It certainly sounds interesting, but how is the gameplay?

With speed handled automatically, all you need to focus on is hitting the notes scattered along the track. I found the control felt off to me until I started using the analog nub more like a trackball. The dev actually recommended this (in a sense) to me as well, saying “If you slowly rotate the left stick, you get more accuracy.” The control is sensitive insofar as the difference between an “Okay” hit and a “Perfect” one seems very small. However, the game is not difficult. On the contrary, I beat a few of the levels’ target scores just laying my GamePad down! This might mean little to high-score chasers trying to top their best, or to those playing with friends (up to five), but it must be mentioned. It gives the impression that Flight of Light is more interesting to watch and listen to than to play.

Besides the tutorial, which gives you a feel for the game, there’s also the campaign, which can be played cooperatively. It has you gradually unlocking all nine of the tracks offered. Free play mode gives you immediate access to the tracks, which can be played competitively in race or score mode. Ultimately playing with friends is what will give this game some legs. The Wiimote motion controls are solid.

Being a rhythm racing game, the music plays a key role. The timing works well, and the tracks are all pretty good. Techno dance music dominates, which I enjoy, but there is variety. Listening to steel drums while moving along an underwater trench, and enjoying a lounge-style sax cowbell blend whipping through a ravine are a couple that stand out to me. You can hear the audio from either the TV or GamePad, but not both for some reason, which is extra odd considering the image is mirrored. I also had a bug that cut the music entirely, forcing me to reset the game. I was hoping that after beating the campaign I might unlock a music player, but no such rewards.

Flight of Light has some issues. But I can’t say that the game is dull. It’s interesting to play, and fun to watch and listen to. It shows growth and improvement and that makes me happy. Grab it at a sale price, and keep an eye out for the next project from Crystalline Green.

Flight of Light has some issues. But I can’t say that the game is dull.