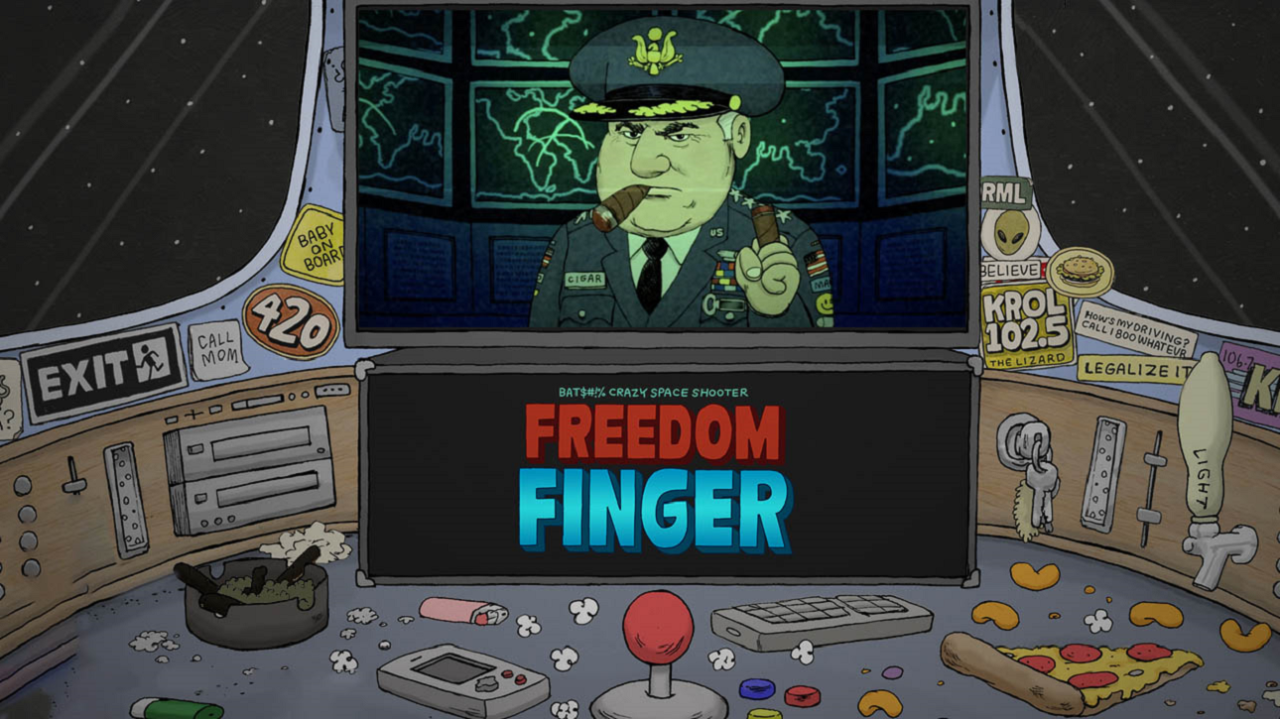 Comedy is never easy, especially in games. It’s incredibly subjective and everybody has a different sense of humour. As a platform, video games have often failed to deliver on comedy. Humour in games can be delivered in a few ways — a game can be funny via gameplay, à la Octodad, or it can attempt to inject humour via the writing. Freedom Finger is the latter, and for the most part, it delivers.

Freedom Finger has the gameplay of any side-scrolling shoot ‘em up (shmup), although because your ship is a hand, flipping the bird, you can also punch and grab other enemy ships. Plus, each stage has its own unique song. This makes Freedom Finger feel like an album, and you’re just playing the music video for each track. Enemies and their weapons often work in unison with the soundtrack, which is incredibly satisfying, ensuring that Freedom Finger is a shmup that’s well worth listening to. The game’s music might be its best feature — each track feels just right, ranging in genre and tone but never feeling out of place.

The 37 levels in the game are spread out across 12 worlds. Each world feels unique and is individually complemented by the soundtrack. It’s worth noting that not all of the worlds will be seen during just one playthrough — this is dictated by the player’s choices made throughout the game. The choices you make allow for a good level of personalisation in your playthrough, but the arcade mode is a must-play if you want to experience every world. Its Rick and Morty-esque animation style reinforces the theme of the game, allowing for consistency in tone and style, supporting its humorous nature. Every area is well-animated and bright, so it’s never difficult to distinguish anything even in the more bullet-hell moments.

Gameplay is simple, moving from one side to the other, shooting whatever gets in your way in an attempt to reach the end of the stage. Despite a lack of variety in what you can do, with no way to upgrade your inappropriately-shaped ship or the weapons onboard, you are able to grab enemies, either launching them or using their weapons against their allies. It’s a great idea in theory, yet it lacks clarity — it never becomes clear which enemies can be grabbed, resulting in unexpected hits to your health bar. Along the way, there are much-needed shield and health pick-ups, which are especially useful in the longer and more difficult stages.

Late on in the game is where the biggest issues begin to surface. Even though Freedom Finger allows for vast customisation in difficulty, certain stages really ramp things up, and seemingly out of nowhere. A gradual increase as you improve is understandable and expected, however, there are stages — especially bosses — which become borderline torturous to beat. It’s also never made clear that you have a time limit in which to beat these bosses, which can cause some confusion.

Between different sections of the game, there are cutscenes where you are advised by Major Cigar (expertly voiced by Nolan North) on what your objective is. The mission of Gamma Ray (that’s you) is to rescue hostages that have been taken by Chinese terrorists. It’s in these cutscenes that the humour is infused into the game. It’s, for lack of a better term, just utter grot — and that’s okay if you find that sort of thing funny. It’s all delivered perfectly, and well-performed, but it’s intentionally problematic. These jokes often feel like they’re being aimed at a teenager (Freedom Finger rated M), but you only have to look at what you’re piloting to realise the target audience. That’s not to say there are no genuine laugh-out-loud moments, they just come across immature and intentionally offensive. That’s the risk taken by developer Wide Right Interactive. 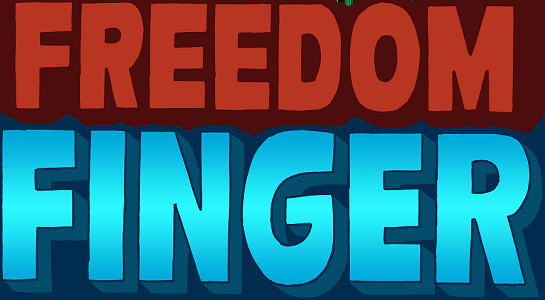 Freedom Finger is at best hit-and-miss. For every positive, there’s also an obvious flaw, but that doesn’t mean it’s not still a good game. It’s certainly not for everyone, primarily because of the offensive tone of the game, yet the moments that really do land and the cracking soundtrack make it worth playing.