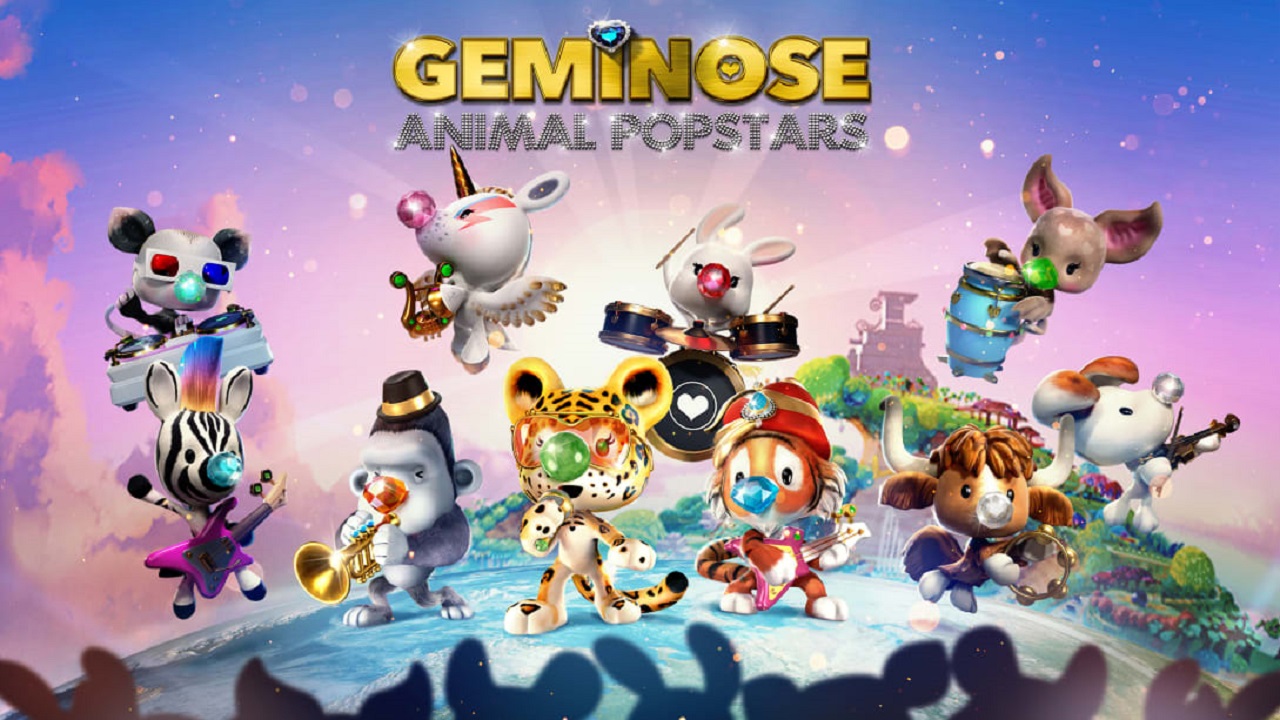 Released on the Nintendo Switch back in May, Geminose: Animal Popstars would be easy to overlook. It’s a motion-controlled game for kids, outside of the impulse purchase range for many. But it’d also be a shame to let it fall between the cracks, as it’s a high-quality release in many ways. Better than most kids’ games and one I think they could love.

In this musical adventure, you’re taking a band of cute critters on a world tour. The titular Geminose have shiny gems for snouts, and are pretty darn cute. They are often aptly named to reflect the jewel on their nose, so you’ll meet Diamond, Jade, and Ruby, among others. The songs they sing aren’t the greatest, but I respect the original vocals. It is rather interesting hearing variations as you change the instruments and singers around. Experimenting with the lineups is something I could see kids getting into wholeheartedly.

The motion controls, while a-okay, could be a deterrent for some. Especially since kids might be more likely to own the less expensive Switch Lite. Would they want to play Geminose: Animal Popstars in tabletop mode, presuming extra Joy-Cons are available? So parents, keep that in mind.

It isn’t all instrument playing, however. The band advances over an attractive and diverse board game-like structure, with a surprising amount of content and variety so that younger ones shouldn’t be bored. You can dress the Geminose, decorate their rooms, and play minigames. The cooking minigames remind me to some extent of Cooking Mama: Cookstar, another game I think kids would like. Everything is narrated, in story mode, by quality voice work. There’s also a free song mode if you simply want to have a quick jam session.

There is a bit of grinding the further you advance. You’ll need to buy new instruments, for example, each reflecting the different countries and cultures of the animals. You have a chance to earn coins once a day in an easy minigame, but things can start to feel repetitive. Though limited to two players, multiplayer is a good way to cut down on the grind. And since each song starts on easy, kids can cut their teeth before advancing to a higher challenge.

One element that I don’t recall seeing advertised, but got a kick out of, was the animal mashups. For instance, a zebra and a tiger make a ziger. A unicorn and a dog make a corndog. While more of an extra than a main game component, kudos for this fun inclusion.

As someone on the cusp of middle-age, this clearly isn’t the sort of title I’d typically gravitate near. But my gaming acumen allows me to recognize high quality when I see it, hear it, and play it. I can absolutely see this goal-driven game finding an audience with kids for many reasons.

While it’s clear much care has been put into this release, our copy of Geminose: Animal Popstars closed on us a couple of times. It’s not a sizable fault in this case – the game reloaded right where we left off – but it’s worth a mention.

If you missed it at launch, why not give Geminose: Animal Popstars a look? While some minor glitches disappoint given the higher price, the overall package is still very good. If you’re a parent with younger kids, know that this game will check off many of their boxes. The Geminose are too cute not to recommend, and I wouldn’t mind seeing more of them in the future.

If you missed it at launch, why not give Geminose: Animal Popstars a look? While some minor glitches disappoint given the higher price, the overall package is still very good. If you’re a parent with younger kids, know that this game will check off many of their boxes. The Geminose are too cute not to recommend, and I wouldn’t mind seeing more of them in the future.