Golf Zero is unique to a certain degree, but this alone isn’t enough to make me recommend it.

The principal thing in this title is to sink at least one ball. It doesn’t matter if the other two fly into the water, for example. Heck, it doesn’t even matter if the player’s water-bound. Yes, you control both the player and the balls: the former jumps and wall kicks in platforming fashion—the latter control in a physics puzzler way.  It goes against the grain, watching my player land in the drink. Yet, Golf Zero’s bare-bones tutorial fails to address that this seeming failure is necessary for success. Not the best start. 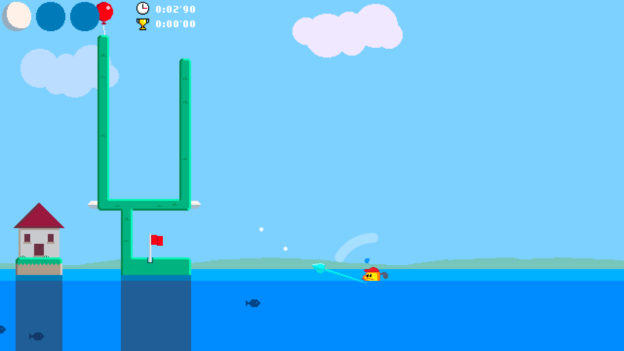 Fail a level, and you may have to wait several seconds before the game lets you try again. Sometimes, failure doesn’t even register! What do you do when this glitch occurs? Tap the X button to reset, something the tutorial once again fails to mention. The mobile version has a reset icon clear-cut on the touch screen. Oh, that’s another thing – Golf Zero has no touchscreen support on the Switch. Fewer options is never a good thing.

Now, when it comes to the level design, it’s a bit out of the blue. If you’re anticipating single-screen levels with two or three obstacles, you’re in for a surprise. Is it a good surprise? I’m mixed. I admire Golf Zero’s ambition as it were, but sometimes less is more. There’s a lot of trial and error. Bouncing from springs, avoiding both stationary and moving threats, sometimes racing another golfer, all while knowing that even a single hit sends you back to start. It’s mostly linear too, so there’s not much you can do if you get stuck, except go back to already beaten levels in hopes of improving your time for a gold medal. 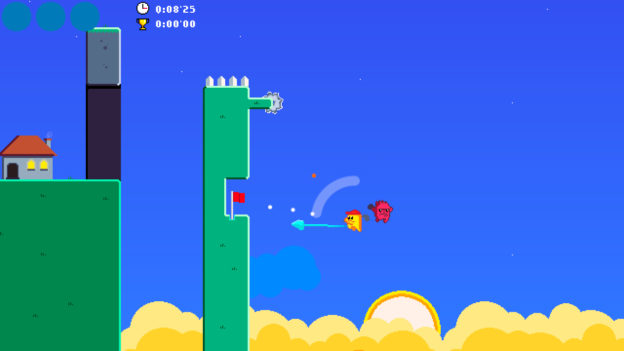 You might say that adds challenge, and it does. But I don’t feel that Golf Zero has the most rewarding difficulty. There’s only a three-second window to aim and hit the ball, something I think robs the game of satisfaction, ironically. When I have favorable outcomes, it doesn’t feel like it stems from my precision—more a combination of randomness and my ability to swing in rapid succession.

Aesthetically, Golf Zero has a pitch and putt approach. The graphics are dull. The music is catchy enough, but it will get on your nerves after a while and make you wish there were more than two tunes. 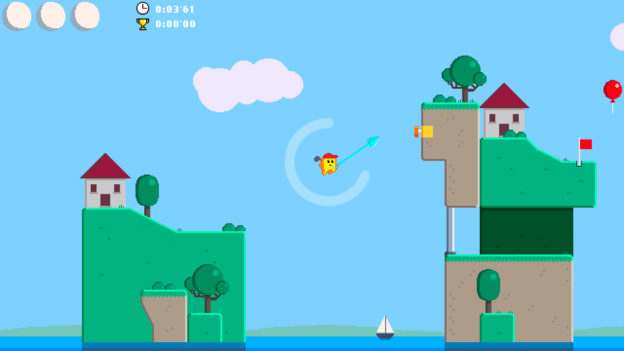 Golf Zero isn’t an outright poor game. But like many Ratalaika published titles I’ve reviewed, it misses the mark in many ways. There are many other games I’d rather spend five bucks on. Heck, Ratalaika themselves published the similar, but superior, Midnight Deluxe, for the same $4.99.

Golf Zero has an unexpected twist on familiar gameplay, but the execution isn’t in a manner that I found enjoyable. This physics platformer is a bogey on the Switch. Try the mobile version (with touch support) instead.

Golf Zero has an unexpected twist on familiar gameplay, but the execution isn’t in a manner that I found enjoyable. This physics platformer is a bogey on the Switch. Try the mobile version (with touch support) instead.