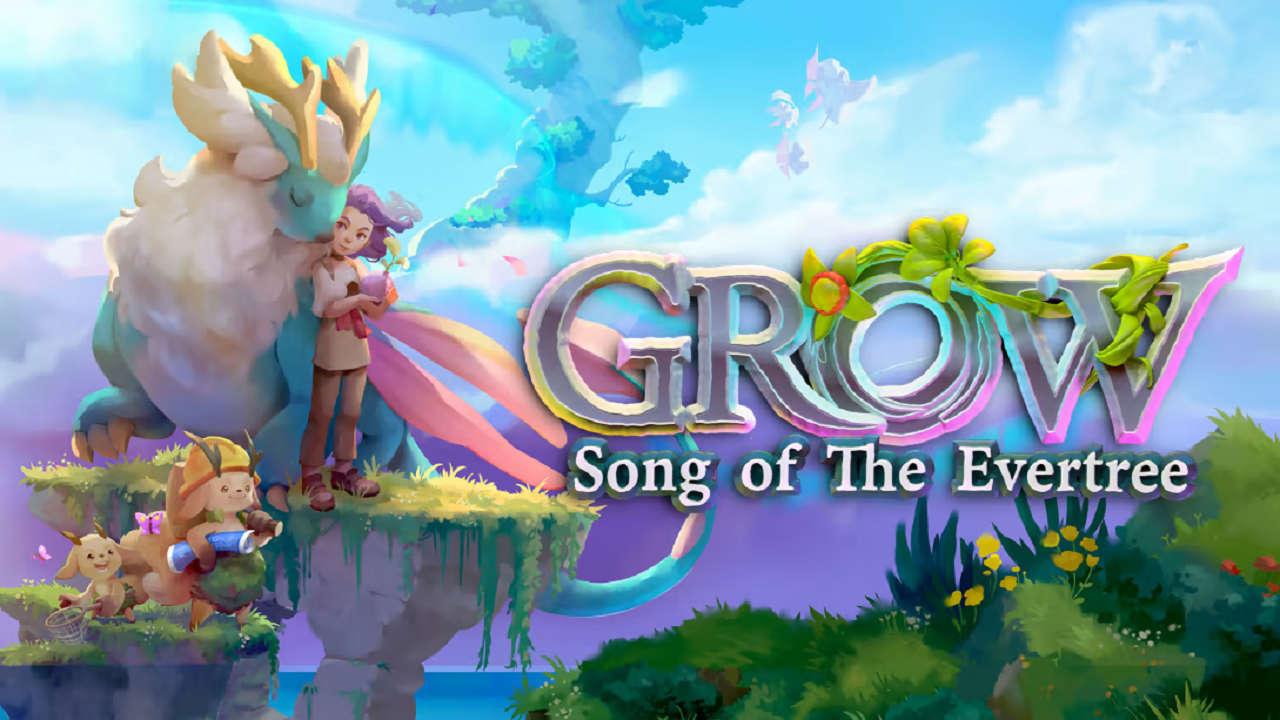 In some ways, Grow: Song of the Evertree reminds me of Prideful Sloth’s earlier (and superior) release, Yonder: The Cloud Catcher Chronicles. Both offer combat-free non-linear exploration across aesthetically impressive worlds with varied quests to entertain and hold your interest.

In other ways, the similarities (there are many more) hit too close to home. For example, clearing thorns, known as The Withering, isn’t all that different from clearing foggy murk. And why can my character still not swim? But Grow differs in some key areas. One of these is more of a story emphasis.

To be clear, a lot of the story is the sort of cliché tropes you’ve seen time and again. I don’t mind the opening at all, “In another time, long forgotten to history…”. But later, I was anxious to advance through it.

In short, The Withering has covered the land, with the people driven from their home retreat to the cosmos. As an alchemist, you’ll apply your early takes on science and tech to transform the land. Coppertop is your comical laboratory assistant; he’s a cauldron (just go with it). You’ll also meet Book (yes, that’s the name of the talking tome), who keeps track of your goals and quests. Thankfully you can name the critter who will fly you from location to location. I named mine Loki, and she sounds like she came from Isla Nublar.

It’s some of these characters (and more) that break through the plot fluff. They are often funny and with enough personality to incline you to chat. If only your playable character could match. Limited alternatives to customize left me with an androgynous-looking guy, though you can unlock more options.

When you’re not doing Yonderish activities (animal befriending, crafting, fishing, treasure finding), you’ll find that the town building is a step up from the former’s scattered farms. While there are still individual worlds within the tree, on the ground, you’re building, customizing, decorating, and inviting people to live, work, and expand the town. You’ll probably get lost too and have to consult your map. While Book bugs you to return home at night, I wish there were even more quick exit portals.

The game starts slowly with tutorials, but eventually, you’ll fall into a gameplay loop. Grow: Song of the Evertree is not a game to judge in the first two or three hours. You may set yourself up for disappointment. For instance, you could fall in love with the flow only to eventually discover the repetition feeling of familiarity. Conversely, you might be disappointed by the sluggishness of the first hour or two, only to be delighted once it opens up beyond the basics. I fell somewhere in the middle.

This game can be addictive. And it avoids some issues similar games have. I never felt like I was waiting to accomplish something, nor overwhelmed at all the possibilities. If this game connects with you, expect it to have legs. Still, some of the best features, like planting seeds to create your own unique worlds, aren’t introduced early enough for my liking. And let’s face it, crafting is pretty darn commonplace across many Nintendo Switch titles.

Graphically the game impresses as a rule. I recommend playing on a TV if you can, though, as the resolution in handheld modes doesn’t seem as sharp or bright. There’s stutter now and then too, which is hard to ignore as it increases. I appreciate how both bloom and gamma can be tweaked – the developers at Prideful Sloth sure do love bloom. And the ability to frolic everywhere simply makes the colorful graphics that much cuter. It’s a mostly stylish presentation, augmented by pleasant music. Unlike the visuals, the music is consistently good throughout.

While ultimately of little consequence, this game does have a handful of glitches. Some are visual by nature, with invisible items and inconsistent lighting. Others are more gameplay-oriented, such as unexplained things or your character getting stuck in the scenery.

Grow: Song of The Evertree is reasonably compelling for the first few hours. But in juggling a lot, some of its more commonplace elements are uneven. While the story sings a familiar tune and long load times add up, this is still a worthwhile adventure with many surprises. Just be prepared for some feeling of recognizable repetition as you play at your own pace.

Grow: Song of The Evertree is reasonably compelling for the first few hours. But in juggling a lot, some of its more commonplace elements are uneven. While the story sings a familiar tune and long load times add up, this is still a worthwhile adventure with many surprises. Just be prepared for some feeling of recognizable repetition as you play at your own pace.