Hypercharge: Unboxed on Nintendo Switch is another exemplification that shooter games can find their fit on a Nintendo console. Hypercharge: Unboxed is a third-person shooter game with an emphasis on both PvE and PvP gameplay, though, PvE is where it shines bright like a diamond. I can see PvP being a more compelling experience at launch, but since the servers weren’t fully populated yet – due to me playing with an early review copy -, I cannot speak on the PvP component too much. 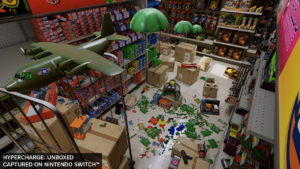 The most pressing concerns about shooters usually reference the gore or microtransactions. Fortunately, Hypercharge: Unboxed eliminates this point of contention and is very similar to Splatoon in the sense that it is kid-friendly; the gore is kept to an absolute minimum and it uses toy-soldiers rather than a gritty, realistic approach. In terms of microtransactions, the cosmetics are all unlockable through gameplay, instead of a pesky digital storefront. The cosmetics are the main reason to keep playing the game, however, it’s incredibly fun when playing cooperative with friends. 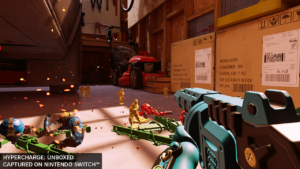 Hypercharge: Unboxed allows you to play with others in a couple of different ways. You can play PvE together cooperatively, or competitively, through PvP. Cooperative play was my favorite because it seemed like that was what the game was designed around. I had significantly more fun playing the game cooperatively, but you can still play the game in single-player – though let’s just hope the developers are able to get a community to back this game. 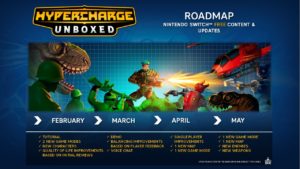 Hypercharge: Unboxed is set to receive free content and updates.

The PvE component of the game is similar to wave-based tower games, but the added mechanic of traversing the gorgeous maps as a toy soldier further heightens the experience. Unfortunately, the rest of the Toy Story crew is absent from this outing. But don’t worry, the abundance of cosmetics should allow you to create your own unique toy soldier. 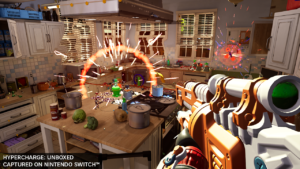 Cosmetic options range from head types, skin tones, to the type of soldier you want to be. There really is a lot you can customize in this game, considering it is developed by a five-man indie team. And if that’s not to your satisfaction, you can also equip one of the many weapon skins in the game. My only concern with this was the difficulty in acquiring some of these cosmetics. I can appreciate the developers made everything earnable in-game, but it would’ve been nice if there was some additional way to get them by either outright purchasing them using in-game currency or obtaining them through a slot-like fashion. 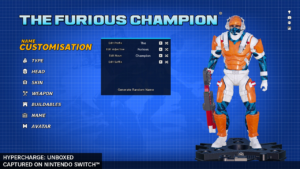 Cosmetics-aside, much like other games within the genre, you can purchase upgrades that can assist you in the fight. These upgrades can be bought during the building stage of the match – which happens before each wave of enemies. These upgrades are known as ‘buildables’ and range from typical to wacky. Some of my favorite buildables are the LEGO brick walls and the vibrant pink slowdown gooey substance. These buildables are also expressive of the kid-friendly aesthetic. They’ll prove useful in your offensive strategy, which will almost certainly spark some childhood memories if you remember playing with Beyblades (and which now appear as an enemy type in-game).  The enemies are not only varied in their design but their approach as well. Some enemies jump down from above and others march toward you on the ground with their beat of doom. Not knowing where they’ll come from next really helps make each wave feel exciting, especially in the later waves. 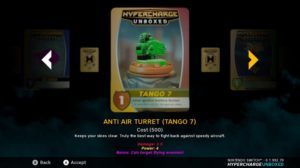 Even with all that the game does right, it can still cause some minor headaches. It is difficult to join friends online – making grouping up for cooperative play cumbersome at times. Another grievance I had was with the game’s jumping mechanics; they’re quite finicky. However, despite these concerns, I still had a jolly time with the game. 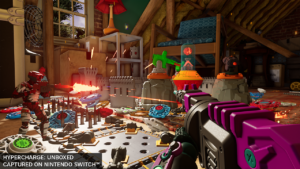 Hypercharge: Unboxed is a fun and unique addition to the small library of shooters already on the Nintendo Switch. Digital Cybercherries’ debut title on the platform offers fun and addictive wave-based shooter gameplay for all ages. With the game’s cute art style and smooth performance, it is hard to go wrong with picking up a content-filled game like this. Especially one that has a lower than usual price-tag of $19.99.

Hypercharge: Unboxed is a fun and unique addition to the small library of shooters already on the Nintendo Switch. Digital Cybercherries’ debut title on the platform offers fun and addictive wave-based shooter gameplay for all ages. With the game’s cute art style and smooth performance, it is hard to go wrong with picking up a content-filled game like this. Especially one that has a lower than usual price-tag of $19.99.