By Roger Reichardt  •  1 month ago

One of the best things about reviewing indie games, you’re introduced to interesting games that otherwise wouldn’t have been on your radar. That is the case with Kokoro Clover: Season 1. The charming anime-inspired platformer is perfect for those more interested in a story-based game or for those with younger kids who are just getting into the platforming genre. 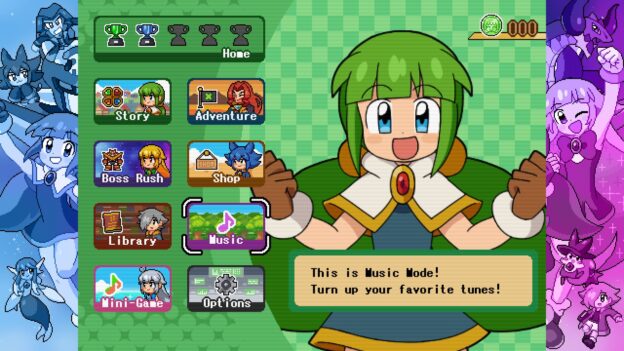 The game follows the adventures of Treffy, a young girl who can summon spirits. Because of this ability, her “gramps,” who found her as a baby in the woods, has kept her secluded from others, worried they may fear her powers. That is until one day, when a mysterious object falls from the sky called the Kokoro Clover. It seems to be tied to Treffy, which sets off a quest for her to find out what’s behind this object as well as more about her origins.

The story is split into twelve levels, each acting as an episode of an anime. Each show starts with an intro complete with a catchy theme song. One of the unique aspects of Kokoro Clover is that it’s like watching a Saturday morning cartoon. You can even select what time the show will start. At the end of each episode, there is a recap of this week’s events, along with a moral that the viewers can take away from the show. These lessons unlock collectible cards in the game. 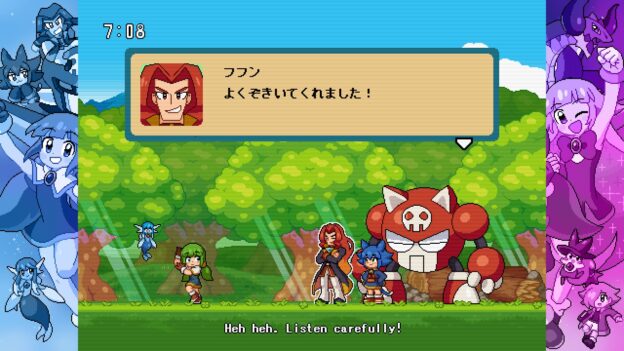 No anime would be complete without a wide range of characters. Besides her spirit friends she can summon, Treffy crosses paths with two foil characters, Valx Vulcan and his partner in crime, Necoco. These two bumbling fools are treasure hunters who are also after the Kokoro Clover. They provide plenty of humor and even help Treffy as the story continues. Treffy also runs into some evil spirits that want to get the Kokoro Clover to resurrect an evil sorceress. The best part of the game is the story, so I won’t spoil it, but it’s why I enjoyed Kokoro Clover.

The gameplay isn’t all that challenging. Each chapter takes about twenty minutes to complete (most of which is story) and is broken down into two parts; the first is usually a short run through a level where you have to run, jump, and shoot enemies. The controls are rather clunky as you can’t use the analog stick. You have to use the d-pad to move your character. You also can’t duck or dodge. However, you have a dance ability, and when you hold down the button, Treffy dances. She doesn’t take any damage when dancing, making the game relatively easy to beat. 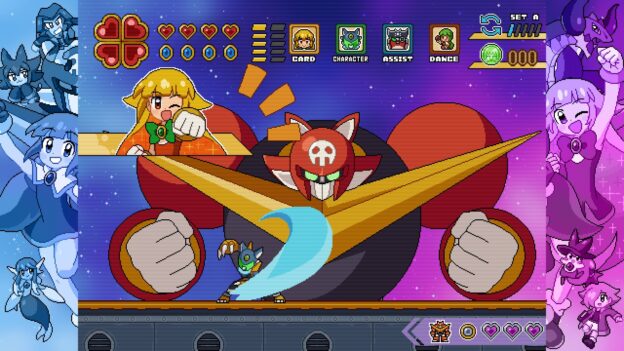 The second part is the boss battles. These battles would be difficult if it weren’t for the dance moves. Hitting the dance button when the boss attacks effectively dodges any damage. The game does try to mix it up a bit, throwing in a rhythm game as one of the battles, but it’s simplistic and makes me think Kokoro Clover is designed for a younger audience.

Treffy can summon spirits to help her as well, but the only one that is useful is the healing spirit. Besides her standard attacks, Treffy can also fill up a special meter that, when full, allows her to unleash a powerful blast. The meter fills up when Treffy dances or when the collectible card you are holding cheers for you, which seems to be at random. 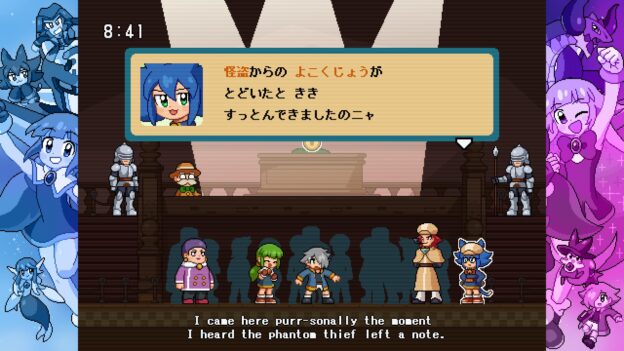 Besides the main story, there is a boss rush mode, an adventure mode that allows you to find more collectibles, and a mini-game, which is just replaying the rhythm game from one of the levels. However, I didn’t spend much time with these modes, as it was evident that the main game was the story mode.

Kokoro Clover: Season 1 is a good game for younger players that may be new to the platforming genre. The storytelling is the best feature of the game, and the presentation is unique, making it unlike anything else I’ve played before. The game ends with a bit of a cliffhanger, opening the door for a second season, which I hope happens.