I first played Lovely Planet as part of E3’s Nindie demos. It left me both slightly perplexed, and mildly intrigued.  Now that the finished game has finally released on the Wii U eShop, I’ve a better idea of what the developers (Quicktequila) were aiming for.  Unfortunately, for various reasons, I feel they’ve missed the mark. 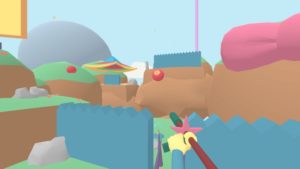 This first person “gun ballet” is focused on speed. In reality it’s something of a first person runner since so often, especially in later levels, a stop in movement leads to near instant failure.  Despite this rather curious angle you’re forced to eliminate every enemy (baddie) on screen, which strikes me as an unnecessary restriction given the rushing focus. There isn’t any online leaderboards – a whopping setback for this style of game!

Lovely Planet has no plot. “A story so abstract, it’s not told at all – you won’t know what hits you.” That last part proves regrettably prophetic. Often you won’t see what hits you to cause failure, and one hit is all it takes. This irritation stems, in part, from how the game controls. 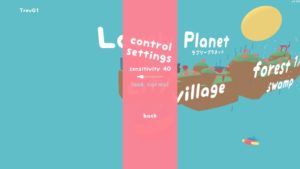 To the dev’s credit, Lovely Planet on the Wii U does support a wide range of controllers. And you’re able to adjust the sensitivity settings. Nonetheless it’s hard to shake the inevitable conclusion that this game was built around a keyboard and mouse setup.  With no means provided to map the controls to your preference, this feeling lingers.

The control issues accumulate.  A “snap target” option is a sound idea, but one that frequently breaks down in execution.  I’d often find it zeroing in on stationary enemies off to the side, rather than the baddie firing directly in front of me.  Another somewhat odd control matter is how the X button is assigned to reset the level – don’t accidently graze it in the heat of the moment.  Sometimes the prompt appears for you to reset the level.  This should indicate you’ve failed, but more often than not it’s easy to fix your misstep and keep going.  Concerning the GamePad, the gyroscope isn’t supported.  The only feature it has is Off-TV play, yet inexplicably no music will play from it.  With the soundtrack such a key selling point, this type of inattention is rather embarrassing. 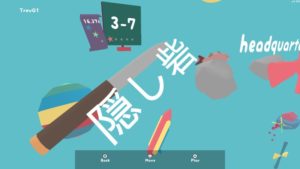 Speaking of the soundtrack, at first I found myself bobbing my head and tapping my feet to the music. Later though, the tracks started to grow tiresome.  There’s only a single tune for each world.  While you can access any level within a world, the worlds themselves still must be tackled in order.  Given the game’s extreme difficulty, these are tunes you’ll be hearing in excess.

To elaborate on the difficulty, I want to be clear that I enjoy a formidable challenge.  What I don’t enjoy, is frustration, and unbalance.  Lovely Planet’s difficulty doesn’t seem to ramp gradually, but rather spikes in a more rapid fashion.  Its enemies are cheap, largely the flying, exploding apples, without the perk of clever or interesting design.  Parts that I presume were merely tough on the PC, require near Jedi reflexes on the Wii U due to the subpar controls and your sluggish weapon.  The game design in general is one of trial and error through forced memorization.  These and more left me with limited satisfaction upon beating levels, something I’d normally get from challenging titles.  There’s even occasional random laughter when failing, as if the devs are trolling you. 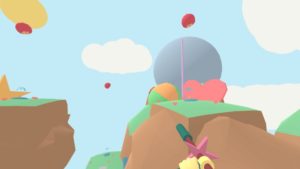 With so many games offering difficulty options, it’s really disappointing to see the amount of content locked through a failure to offer choice.  Options are always the best.  In the end such an approach only serves to widely shrink a potential audience.  If I can stress one point, it’s this – difficulty in and of itself doesn’t a good game make, if you can’t nail the fundamentals.

All this is a real shame, because I do find the premise of Lovely Planet admirable.  In theory it’s a fps the whole family could enjoy.  It has the familiar three star setup to tempt replay.  Despite dated, repeating visuals, it’s also quite a cute game.  The colorful, spartan polygons have some appeal to my retro senses, and the soundtrack (in moderation) is enjoyable.  But even at its best potential, the aforementioned concerns aren’t easily offset. 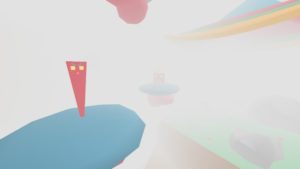 One aspect making me a bit lenient towards the game is uncovering that the most annoying enemies (the flying, exploding apples) can at times be bypassed through clunky shortcuts.  I don’t imagine it’s how the game was intended to be played – it’s counter to speed running – but it does add a lone element of discovery.

“Perhaps it’s a kind of play not suited for a 3D First Person Shooter game …”  The developers have made this admission concerning the design of Lovely Planet, and I would agree with them. Once the novelty of the cute universe wears off, you’re left with a terribly repetitive title that runs out of gas.  Despite my hopes, the finished, complete package has proved dull.  I simply don’t find the design very enjoyable, especially at $9.99.  I’d encourage checking out the eShop demo.  That said, if the punishing gameplay turns you on, head toward the pc version.  You’ll get better control, welcomed online leaderboards, and a cheaper price.  It’s doubtless best to steer clear of this inferior Wii U port.

This late port is overpriced with weaker controls. The lack of leaderboards is inexcusable for a game of this nature.