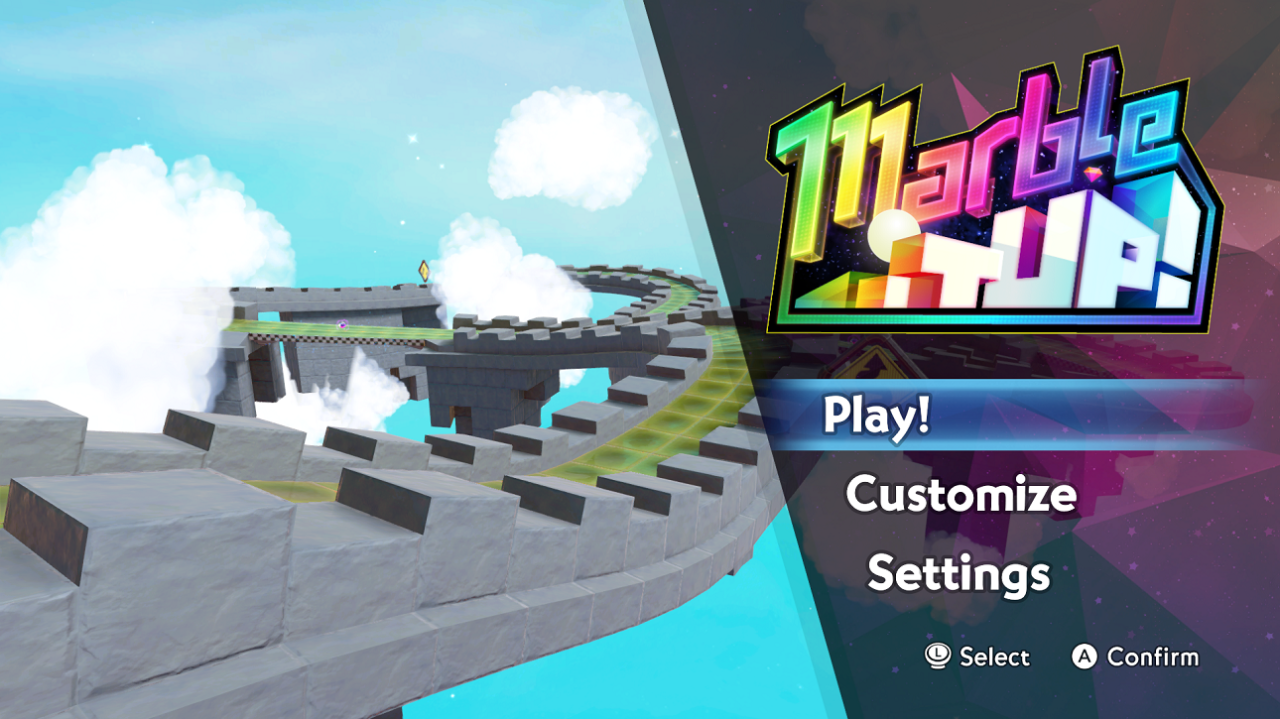 There aren’t enough marble games as far as I’m concerned, so Marble It Up! caught my eye as a fan. I prepared to feel the HD rumble as my marble jumped and rolled through “a gloriously psychedelic world”. Now that I’m finished with the game (for the time being) what are my impressions? 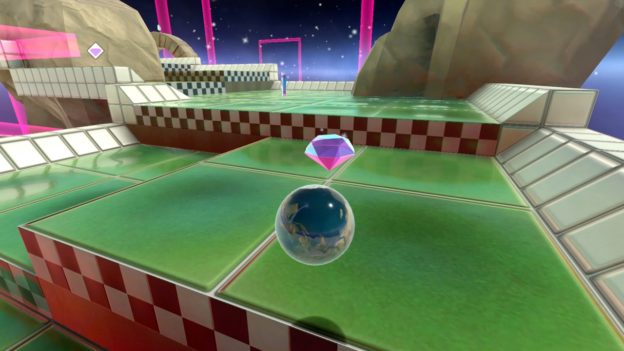 The story here is… there is none. Hardly necessary for a game like this, though admittedly a little plot wouldn’t have hurt, would it? I can see why none was attempted though, as there really is no theme to this game’s levels. The backgrounds tend to be minimalistic, like generic clouds, stars, or 80s laser backdrops. The game looks fine, with a nice colorful sheen, but a bit more variety would’ve enhanced it, especially since it’s short.

Forty levels might sound like a lot, but the first chapter (9 levels) is a cakewalk, with straightforward paths that can be bested in a matter of seconds. Thankfully they are fun to replay, as you try to shave seconds off of your best time. The game’s emphasis on speed, while adding replay value, does no favors to the short core experience though. 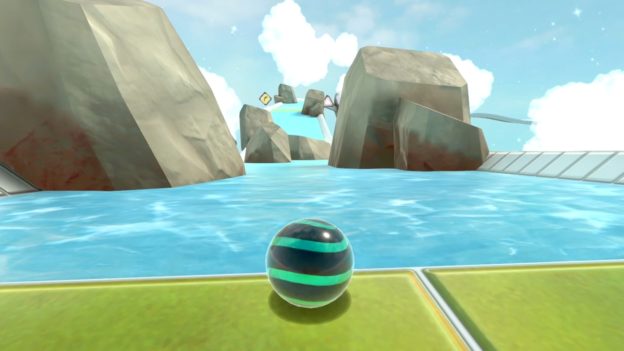 Had obstacles not been underutilized, the experience would surely be longer. For instance, bumpers get introduced fairly early, but only appear a few times after. Also, collectables are limited. Some levels only have one or two gems to grab which seems like a waste, while others have none at all. Things like these leave many of the levels lacking a strong, lasting impression.

Thankfully there are some standout levels as you progress. The mid chapters of Marble It Up!, accounting for approximately half the game, fare best. And the challenge escalates to the final chapter, though some of it originates at a conceptual level. Having to wait for platforms to slowly flip, or fiddle with the camera constantly to view from sharp angles isn’t the most enjoyable. However, medals incentivize completion, and even beating certain levels will likely leave you in want of a silver or gold your first couple times through. 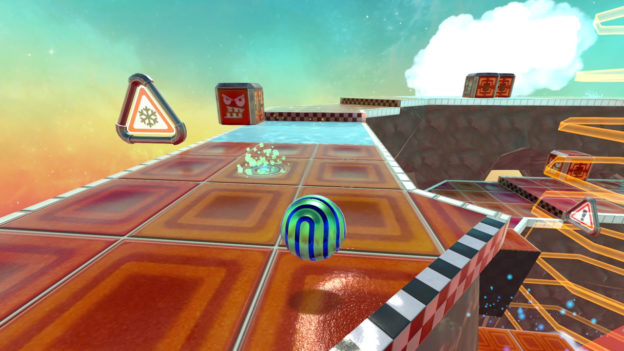 If you aren’t interested in medals, a practice mode allows you to rewind. I should add that being able to pick any level within a world from the start, to tackle them in your order of preference is a great asset. While time is emphasized there is no time limit, which is wise. Throw in a small handful of powerups, and you have a game that gets better than early impressions might lead you to believe.

As I mentioned before Marble It Up! looks fine, generic backgrounds and all. Be that as it may, it doesn’t have much personality visually speaking. Unlocking marble skins to customize helps some, but it’s more of a replay incentive. There’s the odd quick stutter too, usually in connection with powerups in handheld mode, but things are generally smooth the majority of the time. The camera is a bit limited compared to other games of this style. You can look with the right stick, but you can’t lock the camera angle beyond the default view. Yet, options to invert and tweak sensitivity are available, so the camera rarely contributes to any visual acquiescence. 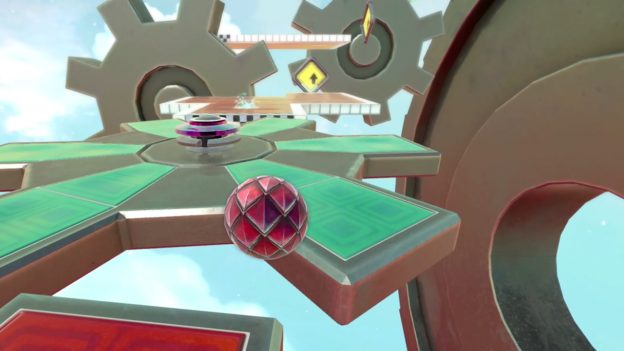 The accompanying music tends to be rousing. All 11 tracks are from Solovox. As is the case with the levels in Marble It Up!, there are a few standouts tunes here. I’m grateful the game lets you adjust the volume for music and sound effects separately. I’m also grateful for the option to pick individual tracks, albeit one buried in the pause menu.

Early in this review I briefly touched on the games short length, as well as the fun that stems from improving best times. I’d like to elaborate on both. The developers are counting on you replaying levels repeatedly. I already mentioned the desire for medals, but leaderboards come into play here as well. There are no friend times, sadly, but displaying top five local times is still a good thing. However, displaying only top five for global times is not – way to squander the potential! Replaying to race against your own “ghost” or that of one of the leaders does somewhat make for a nice save though, as it’s fun. 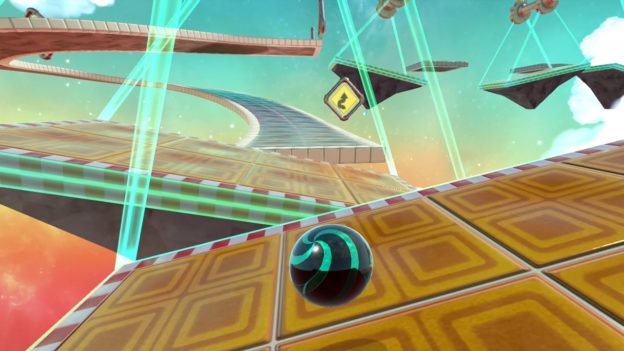 Marble It Up offers some polished entertainment, but it feels incomplete to me. It’s often frustrating, not just from uneven difficulty, but from unrealized potential. It needs more to justify its $19.99 price tag. The fun is fleeting. More levels, more collectable gems or hidden trophies, and more fully realized ideas… these would help to both shake the, at times, generic feel the game has, and inject it with more its own style, while adding needed content. However if you enjoy leaderboards as a replay incentive and don’t mind waiting to see if/when DLC arrives with multiplayer (shame it wasn’t included from start!) this is a solid, if expensive, game for fans.

Marble It Up offers some polished entertainment, but it feels incomplete to me. It’s often frustrating, not just from uneven difficulty, but from unrealized potential. It needs more to justify its $19.99 price tag. The fun is fleeting.