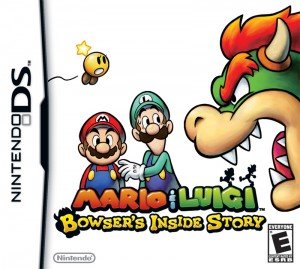 Mario and Luigi are back in an all new adventure for the Nintendo DS; and this time, they’re joined by an unlikely partner. Being that the game is subtitled “Bowser’s Inside Story”, Mario & Luigi 3 features the big bad boss himself as one of the main, playable characters. It’s an interesting twist to the series formula and definitely a welcome one, as Mario & Luigi 3 shows a different side of Mario’s long-time nemesis. 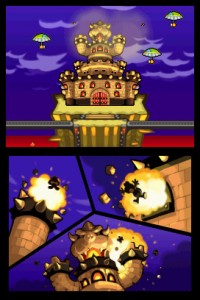 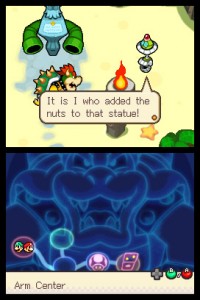 The story begins by introducing players to the Mushroom Kingdom once again, and a problem involving some tainted mushrooms called Blorb Mushrooms. These mushrooms turn Toads into Blorbs, which are large, rotund Toads. Princess Peach enlists the help of Mario and Luigi (lovingly referred to as ‘the bros’) to find out the source of the disease and find a cure. Meanwhile, Bowser learns that he’s been left out of the discussion and crashes the party at Peach’s Castle. Peach banishes him and Bowser then finds himself next to a strange shopkeeper that tricks Bowser into eating a ‘Vacuum Mushroom’. This makes matters much worse as Bowser now inhales the inhabitants of the Mushroom Kingdom, including Mario, Luigi, Peach, and the Toads. Bowser finds out that ‘Fawful’, was the one responsible for the Blorb/Vacuum Mushrooms and is planning on taking over the Mushroom Kingdom. As Bowser attempts to retake his castle from Fawful, Mario and Luigi must give him assistance from within. 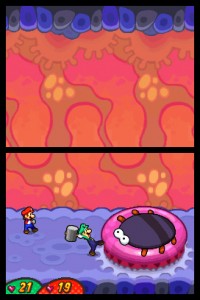 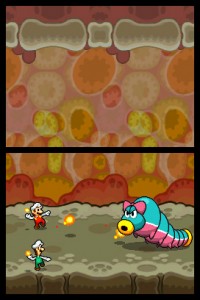 If you’ve ever played one of the Mario and Luigi games before, you’ll know that the series is known for its clever and witty dialogue. Mario and Luigi 3 is no exception and, if anything, takes the series to new heights of hilarity. You’ll find that even Bowser himself has a sense of humor and you, as the player, feel drawn into the game by the dialogue. It’s truly one of the most fun and clever stories I’ve read/played through in a long time! The main story should take you through about 25 hours of gameplay with maybe a little more to collect all the secret moves/items.

Mario and Luigi games, like the Paper Mario series, are based on an RPG-like formula. Your moves are turn-based, your life is measured in HP, moves in SP, and your characters level up through experience (XP) gained in battle. Seems like the typical RPG right? Wrong. While there are many similarities here in classic RPGs, Mario and Luigi 3 takes it a step further with some very cool elements. First, you can manipulate battles in a realtime way to affect you offense/defense. So let’s say an enemy throws a projectile at you. If you press the A,B,X, or Y button (depending on your character) at the right time, you’ll be able to deflect the attack or defend yourself. It’s really quite ingenious, since you’re actually interacting with the battle even when it’s not your turn, in the traditional sense. This was true even of the first 2 Mario and Luigi games, but now M&L 3 features more use of the touch screen and stylus for moves. You can now breath fire using the mic, or use the touch screen to unleash a barrage of Goombas on your enemies. In most RPGs, I would sometimes completely avoid a battle if my HP was low, but in M&L 3, you can completely control the battle so, if you know you’re timing, you can go through battles unscathed! I found it very hard to put this game down over the last few days, and it really boils down to the incredibly intuitive, fun combat system. 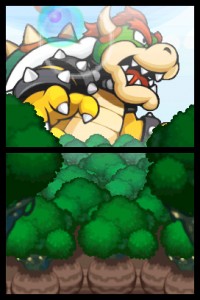 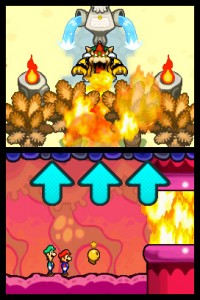 Mario and Luigi: Bowser’s Inside Story also features some of the best graphics on the DS to date. The game is all done in 2D, but the presentation features bright colors, detailed animations, and diverse environments. The game also switches between areas with a top-down view and those with a side-scrolling view. For instance, Bowser may be walking around in the overworld and may need help inside to lift something heavy. So the view switches to Mario and Luigi in a side-scrolling view to help Bowser. The animations and expressions of each of the characters are priceless too. You’ll find yourself chuckling every time you hear Mario’s Italian mumblings. The game really improves upon the series in every aspect and the graphics especially are looking better than ever.

Mario and Luigi: Bowser’s Inside Story is the best in the series so far. Partners in Time was the first one for the DS and added some new gameplay mechanics, but it really didn’t utilize the DS to its fullest. Mario and Luigi 3; however, builds upon that and creates an experience that is truly unique to the DS. With its smooth, beautifully animated graphics, and its incredibly fun combat system, Mario and Luigi: Bowser’s Inside Story is an instant classic, and should belong in everyone’s DS library.