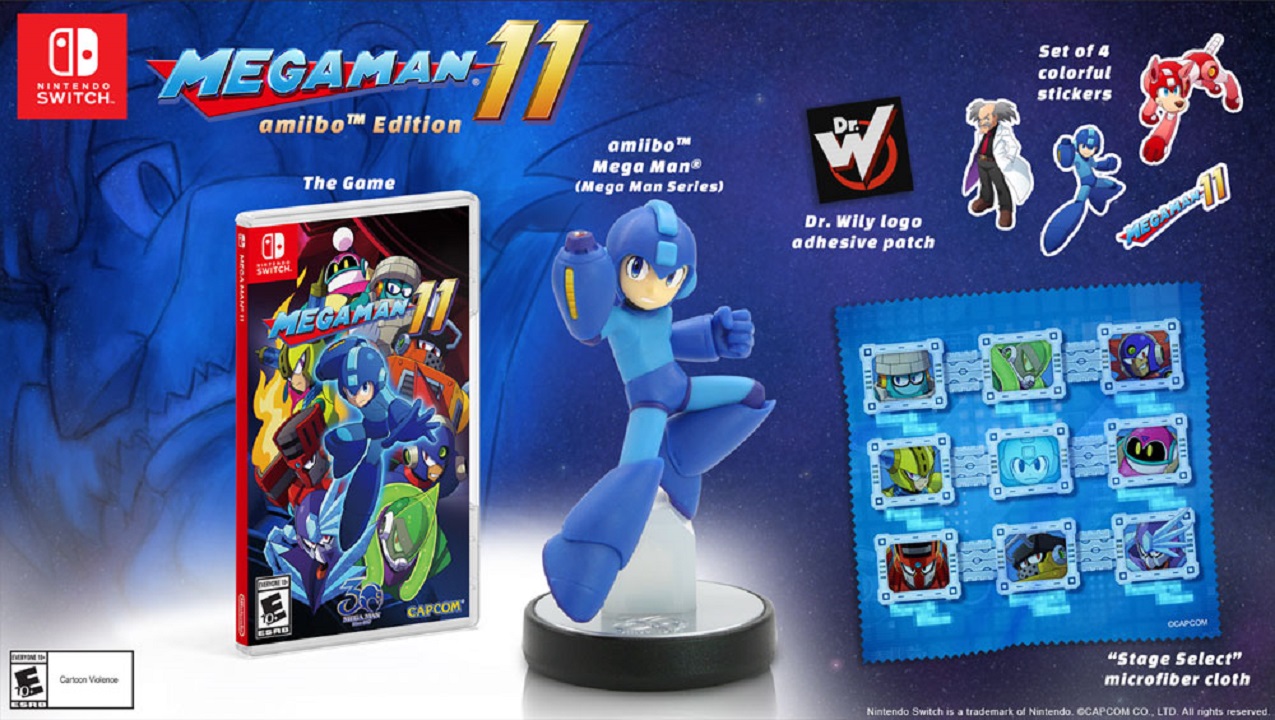 The blue bomber’s long-awaited return, Mega Man 11 is billed as “the perfect opportunity to experience Mega Man for the first time!” I suspect it’ll do even better amongst series enthusiasts who have been asking for another entry for what seems like forever. How does 11 stack up?

The game opens with young Dr. Light and Dr. Wily in their student days. A strong difference of opinion on research leads to their parting ways. In the year 20XX, an older Dr. Wily calls up these old memories to serve as a catalyst for his opposition. Dr. Light quickly yields to Mega Man’s request to jump into action. 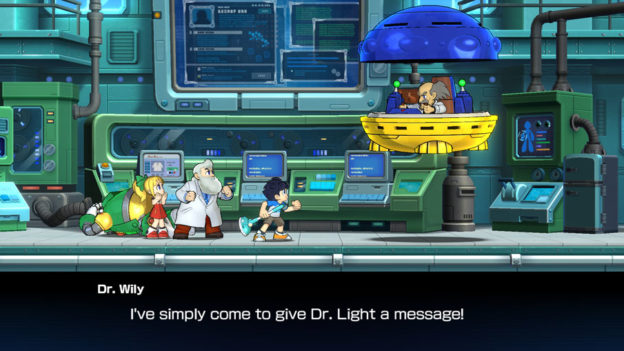 One of the first things you’ll notice is the hand-drawn backdrops. I’m quite impressed by them, The frantic stages don’t really lend themselves to stopping and staring though, so be balanced when taking in the sights. The 2.5D look works, although the accompanying music is surprisingly just good, not great. I say that because early Mega Man games have such catchy and memorable tunes that are still among my favorites. I think the tunes in Mega Man 11 are lacking just a bit, but time will ultimately tell. 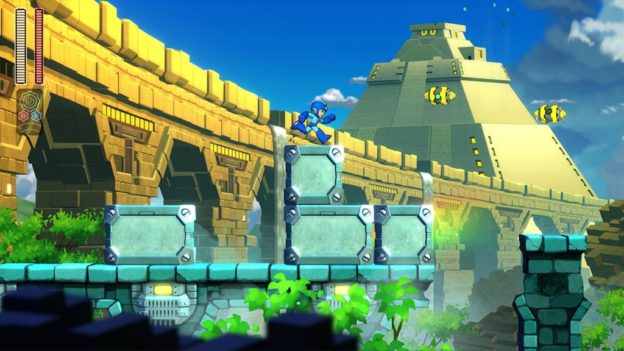 The stages themselves are somewhat mixed. Bounce Man, for instance, has a stage that sounds great on paper, but in practice, I found rather annoying. Playing a level on the equivalent of a bounce house would work well with Sonic the Hedgehog, but doesn’t translate that well to the difficult action of a Mega Man game. On the other hand, the Tundra Man stage, in spite of combining icy surfaces with the wind, won me over with how the gusts lead to both some fast-paced and methodical platforming. I also dig the winter aesthetic, including robotic snowflakes, and a mammoth mid-boss. 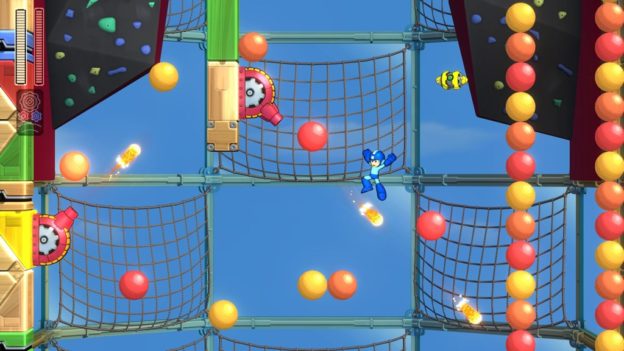 Perhaps it’s not so much the stages being mixed as it is the controls. I’ll break them down into two parts. First, we have the new Double Gear system, which lets you temporarily boost the speed and power of Mega Man. Honestly, I didn’t feel overly inclined to use it for whatever reason, and I don’t think it’s as sizable an addition as Capcom might. That said, there are times where it is needed, and for those instances, it is reasonably satisfying, especially when slowing down time. Perhaps it’ll wind up like the Mega Buster from Mega Man 4, an addition that I didn’t feel necessary initially but grew to appreciate in time. 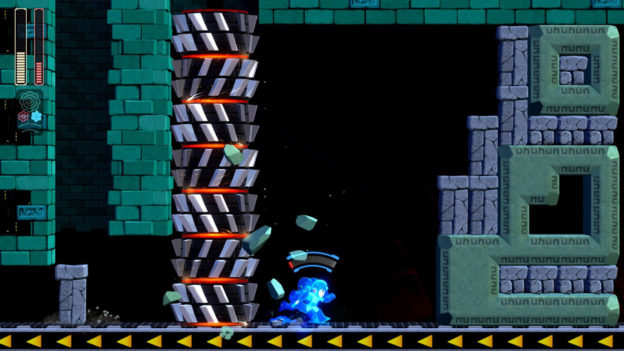 Secondly, we have the core controls in general. I found it too easy to accidentally activate the gear system or a master weapon I didn’t want, at least in the early-goings. That said, options to map the controls how you like help minimize this to almost nothing. Turn off the special weapon shortcut and you’ll save some headaches. Jumping occasionally reveals suspect hit detection where Mega Man appears to hit his head off a ceiling that’s not visible. Also, there are a few instances, albeit not numerous, where jumps don’t register. I want to be clear that the controls are fine overall. But in a Mega Man game, “good enough” might not cut it. Why is that?

This game is punishing. Anyone saying otherwise is likely posturing. Capcom has wisely provided four difficulty settings. I picked casual as “it’s been a while since I played a Mega Man game.” However, once you pick a difficulty level it’s locked in. What happens once I shake off the rust and want to bump it to normal? Why needlessly handicap otherwise smart options? 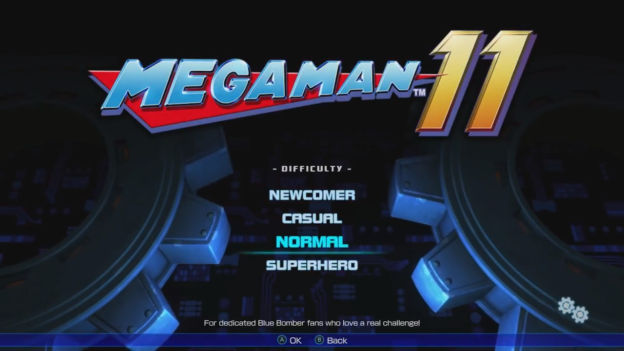 For better or worse, the game’s challenges stem from things longtime fans know well. Leaps of faith, instant destruction via things like crushing or spikes, enemies that can’t be destroyed, respawn, or have cheap placements, and busy sections of stages that overstay their welcome. I appreciate the enthusiasm but unbridled it can lead to too much of a good thing. While Mega Man games have been difficult from day one with challenge as a key, I never felt it was the identifying mark. However, I know others disagree. Those for whom challenge is top will enjoy Mega Man 11 even more than I have. It’s still addictive.

Extra modes include a mix of (largely) uninspired challenges and leaderboards. I was entertained flipping through the gallery, learning about all of the game’s enemies and bosses. You can even hear all the vocal clips of the latter. 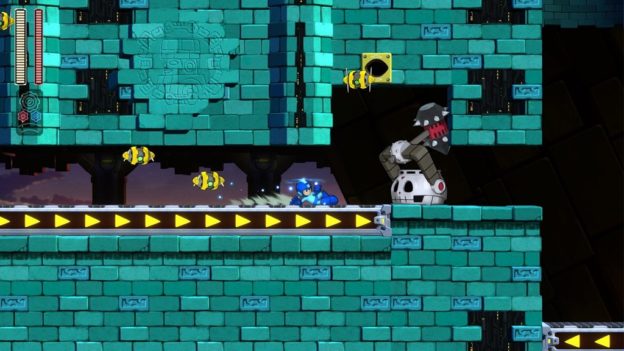 The initial thrill is sizable, but once it tapers off, Mega Man 11 reveals itself to just be a good game, not a great one. There’s no shame in that; I’m just grateful the blue bomber is back. I’d hoped for something that better balanced the old-school with innovation after all this time, but that isn’t something the series has generally been known for. The familiarity is comforting in many ways, so for those with nostalgic interest, I recommend the physical amiibo edition with some cool extras. Myself, I’ve come to the realization that my favorite Mega Man games may always be the NES classics I grew up with. I’m okay with admitting that. If you feel similar, Legacy collection, available on both 3DS and Switch, is a less expensive option with more content.

The initial thrill is sizable, but once it tapers off, Mega Man 11 reveals itself to just be a good game, not a great one. There’s no shame in that; I’m just grateful the blue bomber is back. I’d hoped for something that better balanced the old-school with innovation after all this time, but that isn’t something the series has generally been known for. The familiarity is comforting in many ways, so for those with nostalgic interest, I recommend the physical amiibo edition with some cool extras.