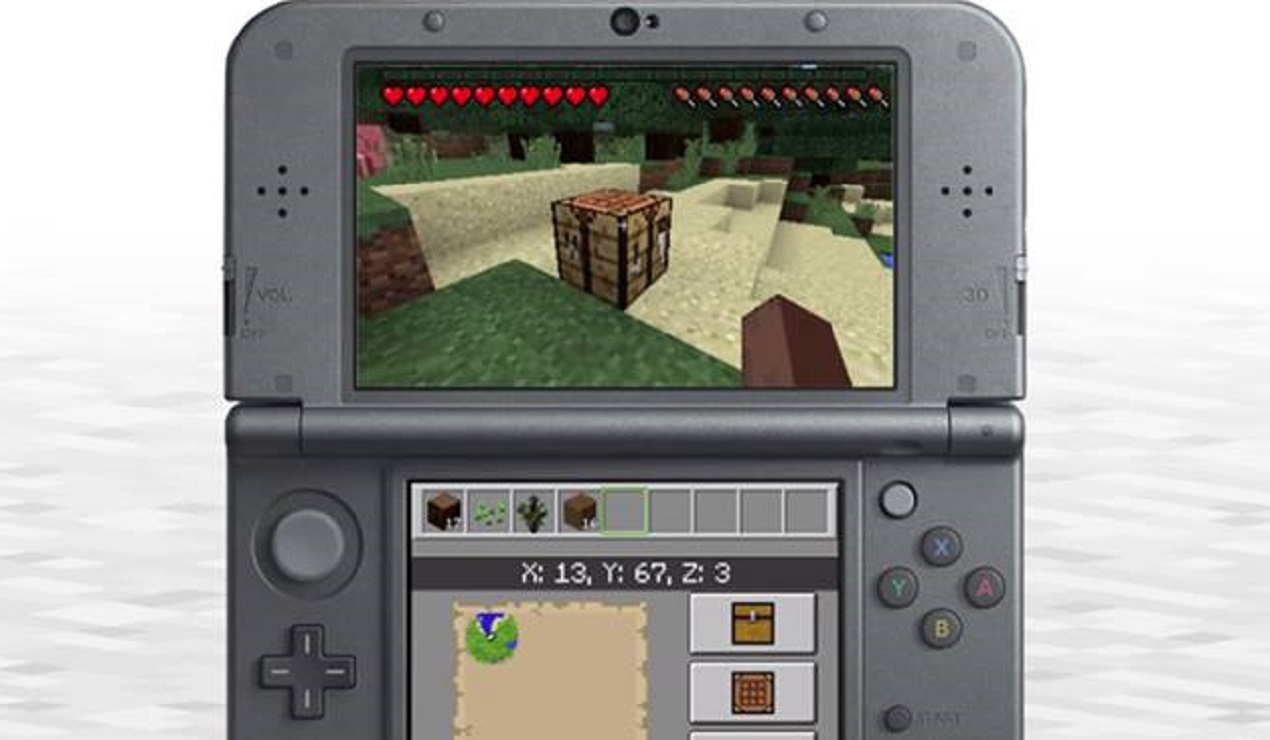 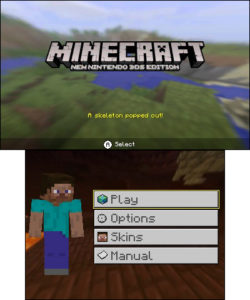 Minecraft is a well-known game that was originally released for PC back in 2009, and has since been ported to consoles. Most recently it has been ported to New Nintendo 3DS systems only. Minecraft allows you to explore randomly generated worlds and build and create with seemingly unlimited resources, making anything you can imagine.

Minecraft on the New 3DS family of systems is somewhere between the pocket edition and that of other consoles. Like all of the console versions, it is not up to date with the PC. There is a small load time, but less than a minute.

Another great feature about the game is the auto save that will trigger every twenty minutes. There is a warning about every five minutes giving the player time to get to safety if needed before the save. Unlike console versions, the auto save disrupts gameplay for a few seconds to save. I also used the feature as a way to track how long I was playing. If needed you can pause the game and save yourself. 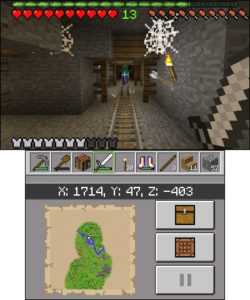 Survival mode is mode where players have to look out for enemies such as zombies, skeletons, spiders and creepers. Creepers are the most annoying of the bunch because if they get too close to you they explode. The explosions not only risk killing you but can also destroy the structures you made, which can get annoying. Annoying or not I still respect the creativity of the Creeper. There are more enemies however, these are the ones most common.

In my adventure in survival mode, I found where I decided to build a farm. I kept rudely being interrupted by zombies. I soon realized that there was a zombie spawner back a cave. Rather than just going in and destroying it, I decided to build a stairway high enough so when zombies reached the end they fell to the ground and died, leaving their drops – hopefully, a carrot or potato. I know it may sound kind of mean but they should not keep disturbing my farming efforts.

Players looking to just create can play creative mode. In creative mode, materials are available and ready for use from the beginning. Although I liked creative mode it I still preferred survival mode, even if those Creepers enjoy destroying my structures. 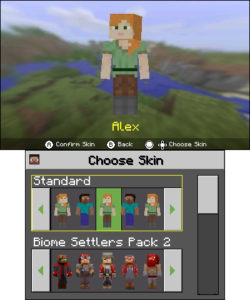 Skins are they way the character appears in the game, for example, the Default skin is known as “Steve”. There are several skins to choose from: Standard, Biome Settlers 1 and 2, Redstone Specialist, Journey to the West, and Holiday skin pack 2015. The Simpsons skin pack would have been nice, or at very least the Mario skin pack from Minecraft Wii U edition.

Minecraft offers a fun time putting your imagination to use. Being able to build and explore is a lot of fun. The ability to bring the game anywhere is awesome especially for those who don’t have the Switch edition or want the limitations of the pocket edition.