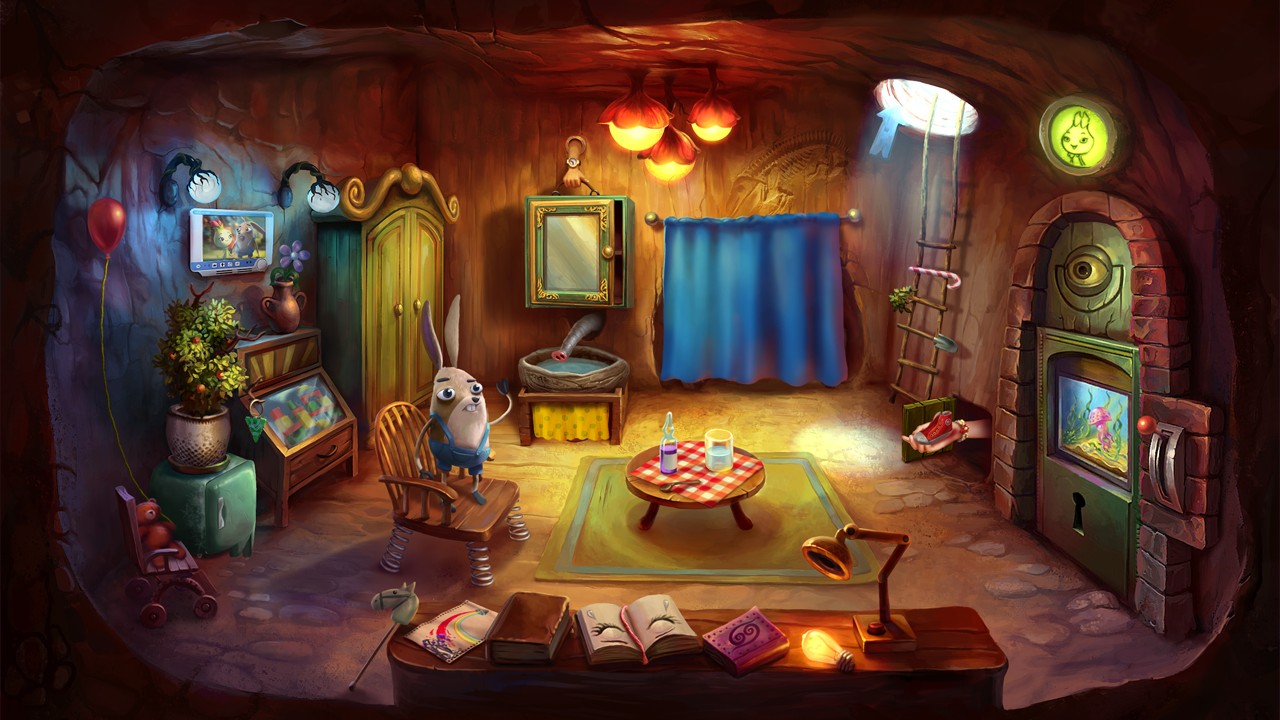 My Brother Rabbit is a cute little title, reminiscent in several ways of the game Figment, also available from the Nintendo Switch eShop. Both are an adventure through the mind, in this case a child’s imagination. Both stem from adversity, represented here as an illness rather than an accident. Finally, both have a surreal presentation. I thought the latter game was great, so it’snot a knock to this evocative Artifex Mundi adventure. Clear similarities aside, how does My Brother Rabbit fare on its own merits?

What I found interesting here is how the game shuffles between styles. It bills itself as “inspired by classic point-and-clicks”, yet adopts more modern trends, for better or worse. You won’t find characters to interact with nor puzzles that stem from your inventory. Instead, the puzzles here are unlocked in hidden object fashion. It’s certainly an interesting take on the various genres.

The hidden objects aren’t so much random junk as they are groups of the same item. So, you’ll find yourself making mental notes between screens, knowing you’ll eventually be looking for half a dozen pieces of pipe or scattered ladybugs. Some screens are moderate in their display, while others are busy as hidden object games tend to be. I did find myself on a few occasions engaged in an old-fashioned “pixel hunt” searching for that last well-hidden turtle or other objects. Some parts did end up dragging a bit.

An argument could be made that this game has too many voices, as it were. Could less equal more, like in terms of story, for instance? There’s no dialogue, for one. Occasional cutscenes drive the tale, with the rabbit you control representing the ill child’s brother. Considering the real-world drama portrayed, I’d hoped for a bit more in the way of humor. But what the game lacks in dialogue for a relief, it tries to make up for with a liberating presentation.

Familiar though it may be, the colorful, nonsensical presentation does reflect youthful imagination. It’s a good thing the imagery looks nice and striking, as you’ll be scouring the screens over and over. The musical tracks that play alongside the graphics serve as an effective complement, evoking a reassuring safety despite some odd imagery. It’s actually a really nice balance. Occasionally I did wish for the option to zoom, but perhaps that wouldn’t integrate well with the way the visuals were drawn?

Even though it’s a cute game, My Brother Rabbit is short. After three hours or so the end credits roll. Launching at $14.99, is this best waited for until a price reduction? I’d say so, as I’m unsure of what type of replay this will ultimately instill. Hopefully, the next Switch point-and-click adventure from Artifex Mundi, Irony Curtain, has more gameplay. Meanwhile, bookmark My Brother Rabbit for a future sale as a good, but short game.

Even though it’s a cute game, My Brother Rabbit is short. After three hours or so the end credits roll.