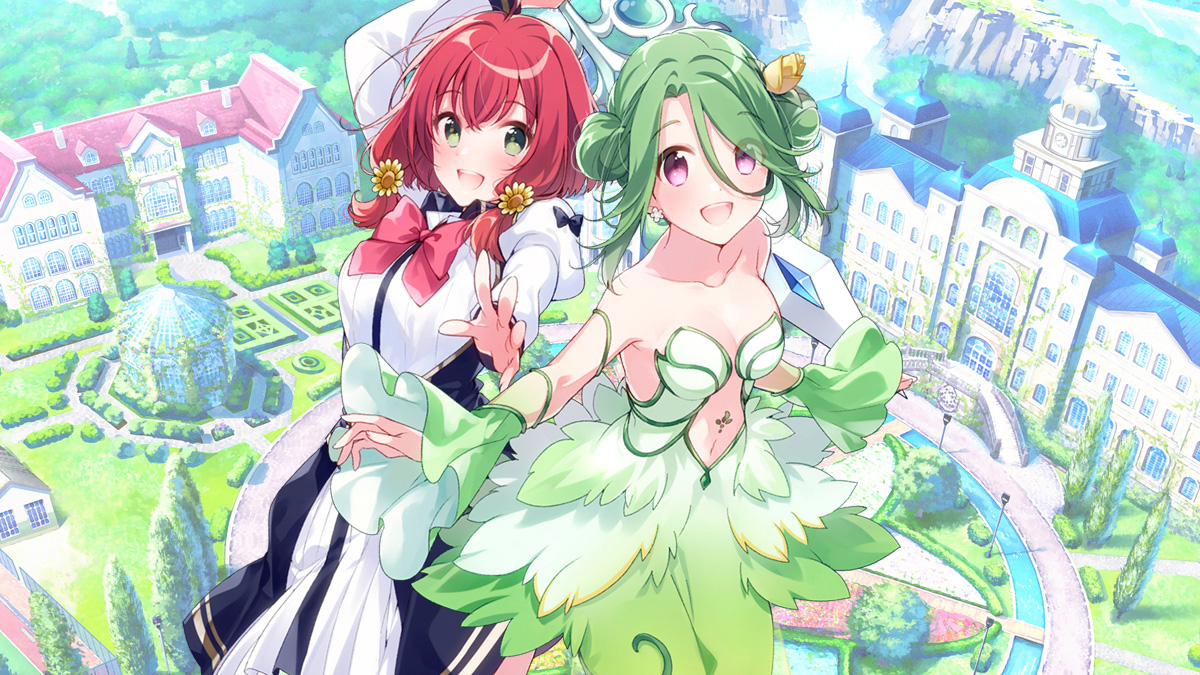 Just keep reminding yourself it's a decent dungeon crawler.

Omega Labyrinth Life is a game that’s hard to describe without sounding like the kind of person who stands on street corners with a tinfoil hat, shouting about the Evil Pancake Masters of the World. It’s a roguelike dungeon crawler set in the garden of a Japanese Academy where the miracle flower that keeps the garden forever blooming has been destroyed, and the female high school students must descend to the underworld to restore it by…

No, stop, don’t cross the street yet!

The girls fight their way through monsters, gather gear and seeds for the garden, and most importantly, gather Omega Power, which is, of course, stored in the chest. This means their breasts grow as they become more powerful and…

…so, make sure to look both ways as you cross against the light into rush-hour traffic.

So, the first thing you need to know about Omega Labyrinth Life (OLL) is that it really likes boobs. As the characters defeat monsters, they gain both gear and Omega Power. Omega Power makes their boobs grow. You know this because every time they level up, not only do you get a quick jiggle shot, but—in addition to their other combat stats—every one of them has a handy letter guide telling you their current cup size. 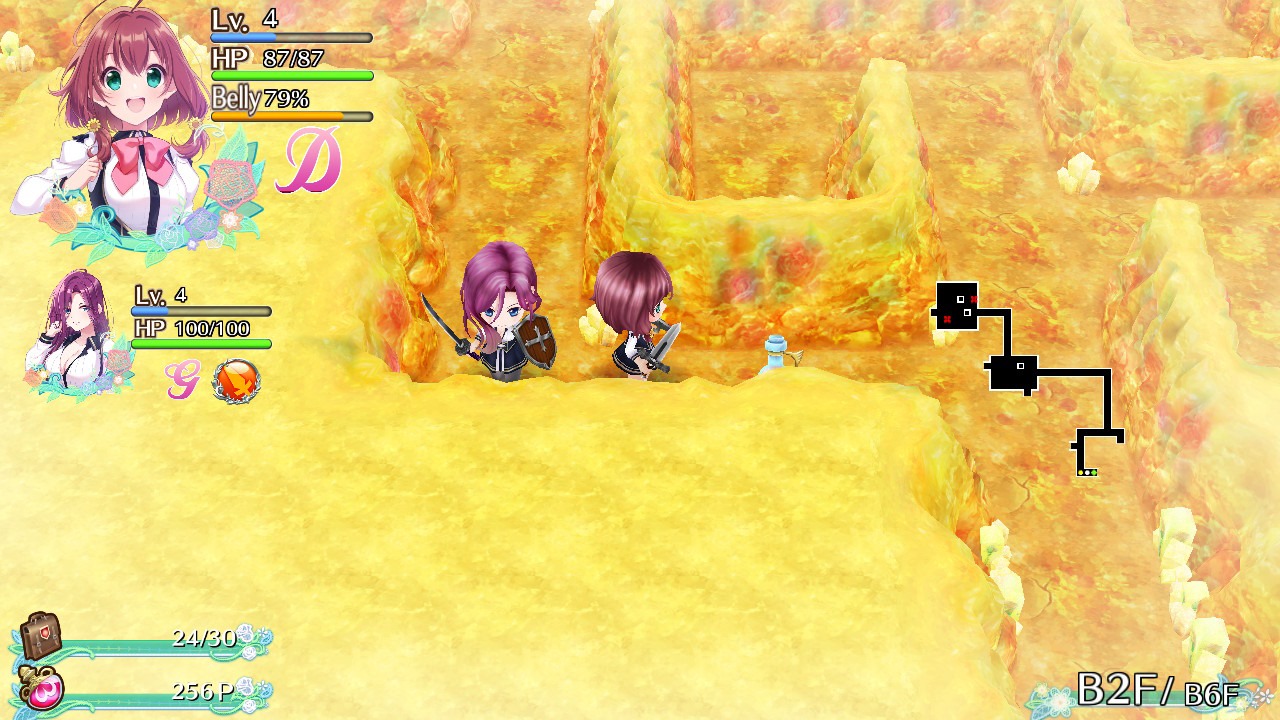 Also, you will occasionally come across mysterious magic items in the dungeons that need to be identified. Now, another game might do the hoary old chestnut of having a sage character you must pay to reveal its abilities, but OLL cuts out the middleman and gives the girls the power to do this themselves by simply exposing the item to their Omega Power. Which, as I mentioned, is stored in the chest. So, you cram the item (which always appears as a cylinder no matter if it’s a sword or a book) between their brassiered boobs and use the Joy-Con to manipulate their chest until you find out what you’re looking at. I mean, what magic item you’re looking at.

There’s more. You can find spas in the dungeons where the characters can heal, and you’ll get a mist-covered cheesecake shot. You lose all your combat experience (and breast size) once you leave a dungeon, but you can permanently level up a character and gain permanent combat abilities by having them travel to the school’s greenhouse and having them be “trained” by the gardener/maid. This involves another cheesecake-shot mini-game where you tap the girls’ bodies until they’re driven to ecstasy and you extract their “essence” in jars, which can then be used to water your garden. 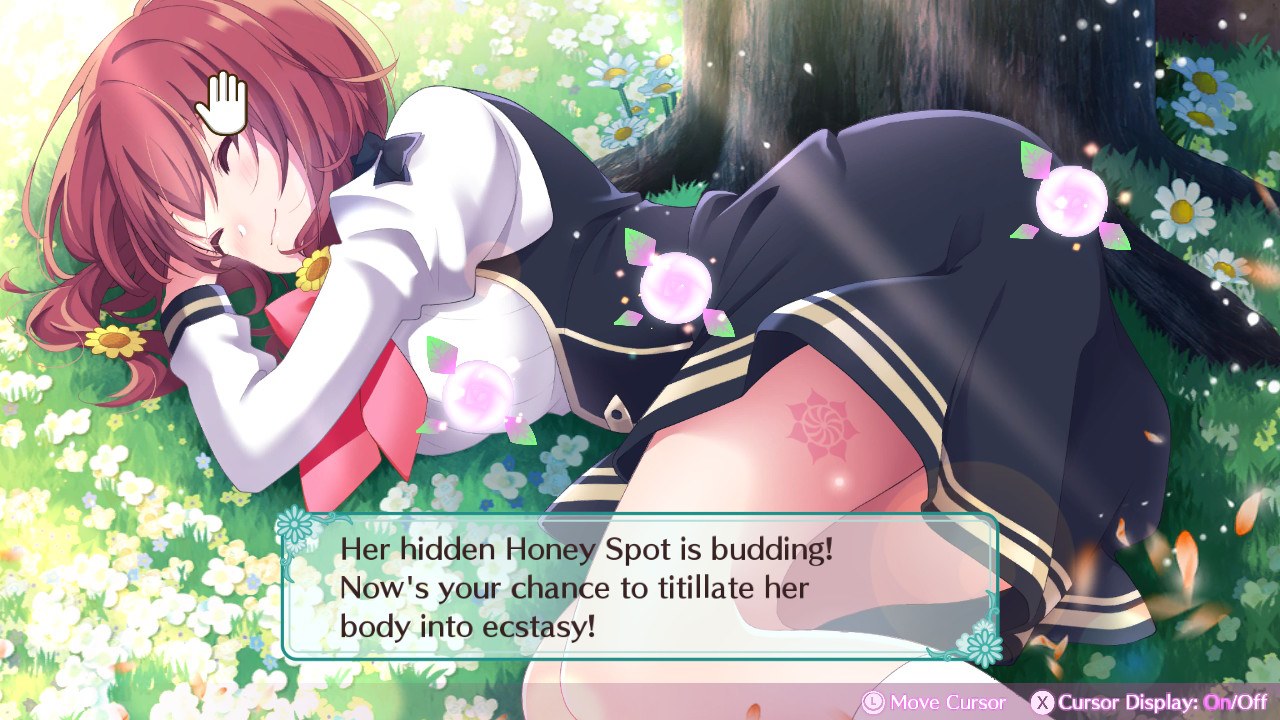 Here’s the thing though, Omega Labyrinth Life is being released on the PS4 in a “censored” version, which, having played the game, makes complete sense because all of the boob-stuff feels completely grafted on. In fact, the game recognizes that you might eventually get bored/embarrassed with it, because at every moment when it’s about to cut to something risque it gives you the option to skip those cutscenes without penalty.

And that’s fine because there’s actually a pretty decent dungeon crawler here. In the Overworld, you have to restore and tend the garden, rebuild the school, improve your weapons, and build your gear. 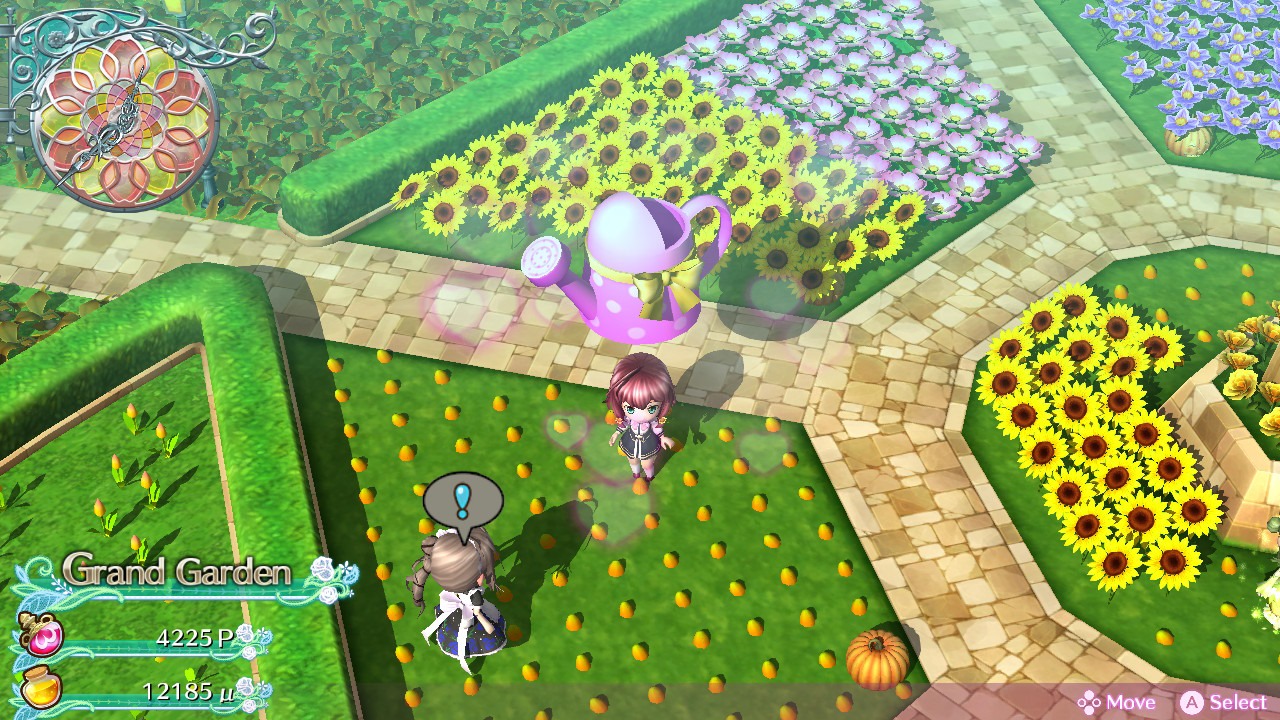 The dungeons start off simple but quickly ramp up with a wide variety of monsters, traps, and challenges. Plus, after several really easy levels, the game gets very challenging very fast. One nasty shock was getting knocked out in a dungeon and discovering that you lose all of the gear you carry with you…including the sword and armor I’d spent several sessions improving. 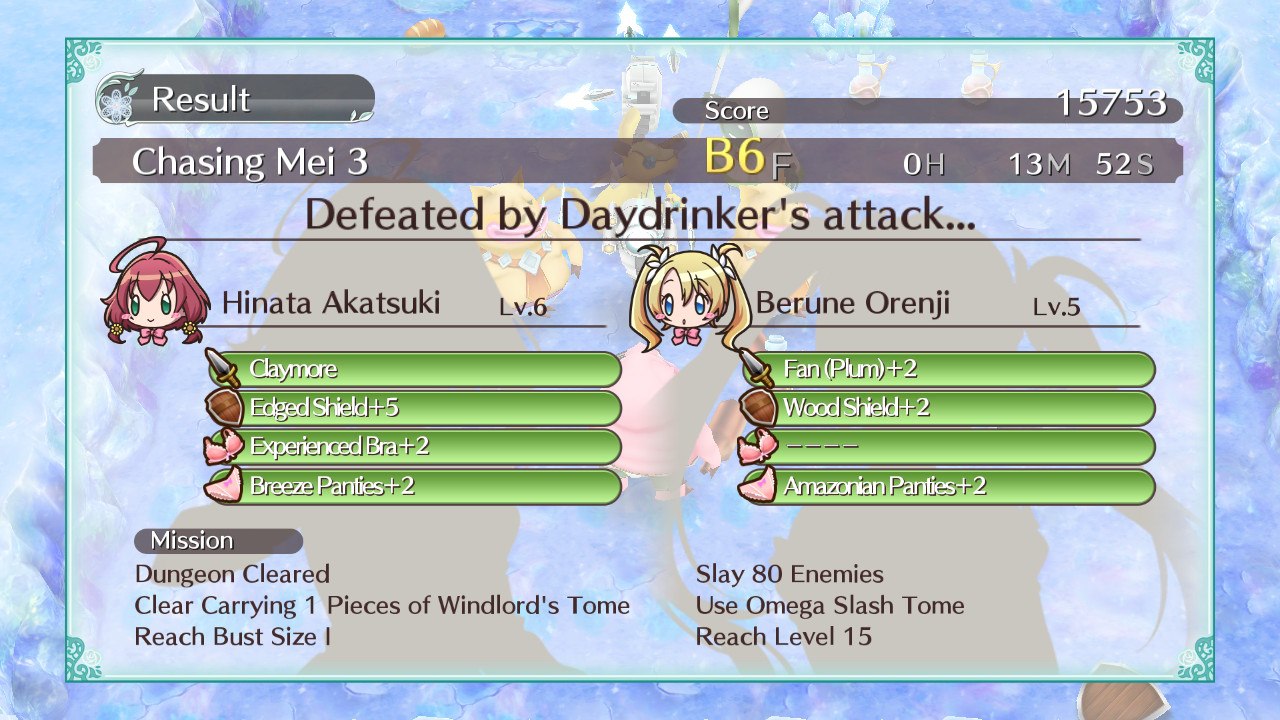 OLL does get into grinding (must…resist…joke) rather quickly, as each school “day” quickly devolves into garden care, leveling up, and exploring dungeons to advance the plot. The only variation in the program is which flowers to plant and which two of the five characters to take into the dungeon. And if you enjoy grindy dungeon-crawlers, this is a lot like the ones you’ve seen before.

Except that this one also features plant-ladies who will repeatedly challenge you to a game of Rock-Paper-Scissors. That you must compete in by manipulating boobs. 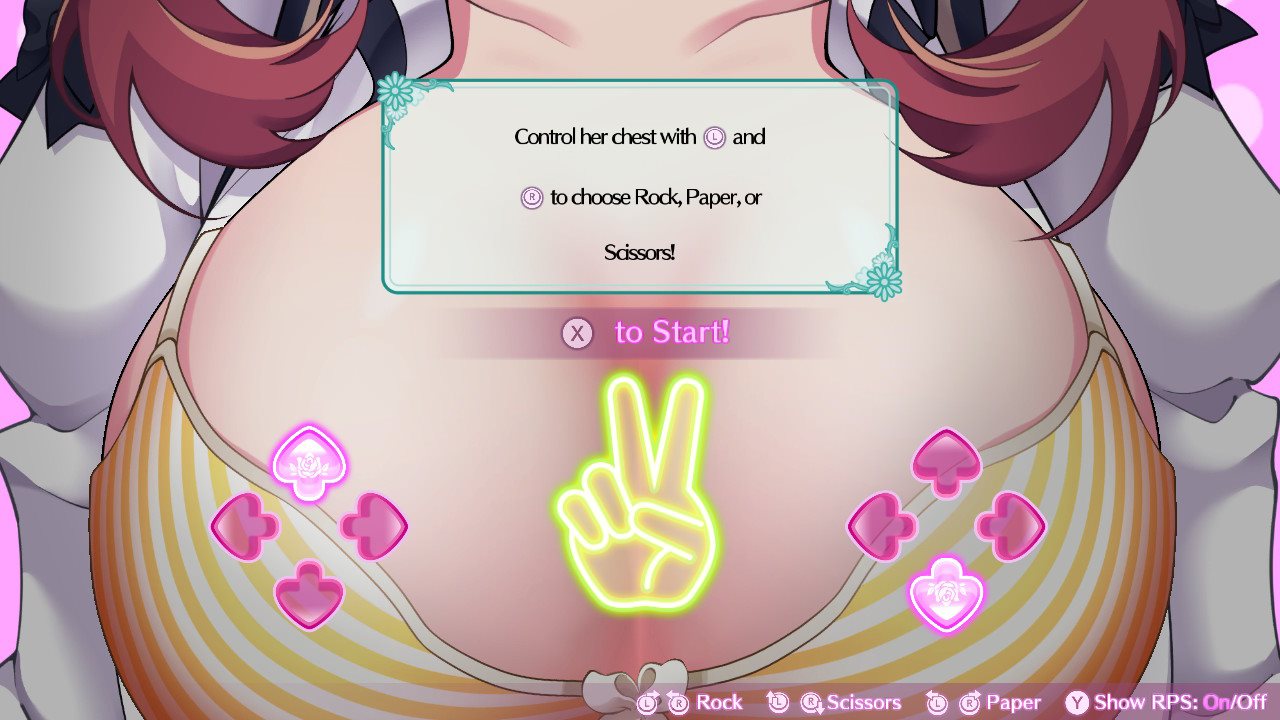 I forgot to mention earlier.

Omega Labyrinth Life is a colorful, well-produced roguelike dungeon game with a lot of cheesecake, set in the world of Japanese schoolgirls. The nice part is that you can participate with that aspect of the game to whatever degree you like, and there’s a pretty fun game with some decent writing to season it all.