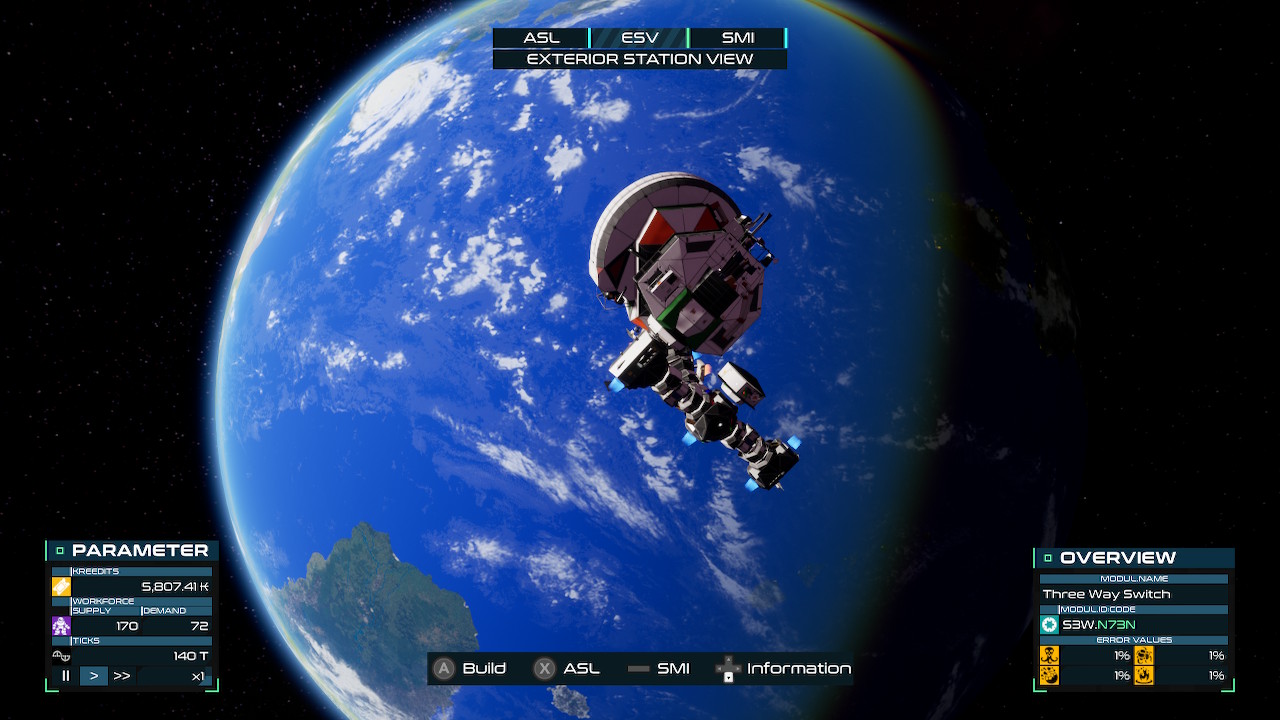 Did you ever dream of being an astronaut? I did. I was entranced by both the thrill of Buck Rogers’ dogfights-in-space version as well as the dopey goofiness of our actual space program. I’m also getting old, so along with a box set of WWII documentaries, I’m also really fascinated by how things are put together.

Enter orbit.industries, a building management sim based on the concept of a commercial orbital station. Think of yourself as Space Schneider (that one’s for your dad), completing missions to make space bucks (here called “Kreedits”) so that you can research and build new sections onto your satellite, which will of course unlock more missions, worth more money… 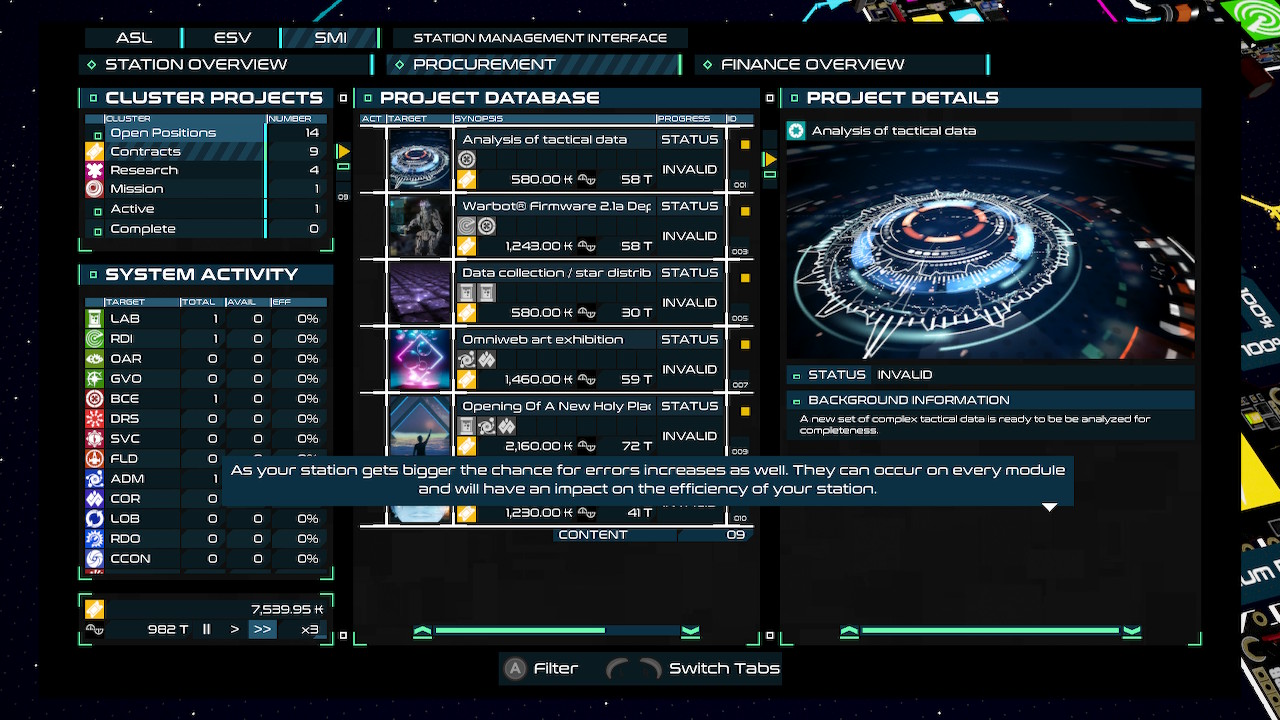 The trick of the “building” part is that you have to put it all together, with none of the parts overlapping in form or function. Solar batteries need a lot of room to rotate, and airlocks need an unobstructed path reaching out to infinity. Using the Joy-Con, you can rotate the spaceship in 3D and attempt to attach the component to an orange anchor (used mainly for support structures like power, environment, and water) and blue anchors (every other structure, from sleeping habitats, laboratories, and docking bays).

Every structure costs upkeep of Kreedits every turn (here, called “ticks”), but they need resources from other structures (the aforementioned light and power, but also things like “commerce” and “radiation dispersal”), along with a human workforce to operate at peak efficiency.

And, once you’ve got the structure installed you get to move to the second, far geekier part—attaching everything to a circuit board!

In the Abstract Systems Layer, you take a microchip—representing the component you’ve constructed—and attach it to a board, then connect the “circuits” of the resources that the chip requires and supplies. 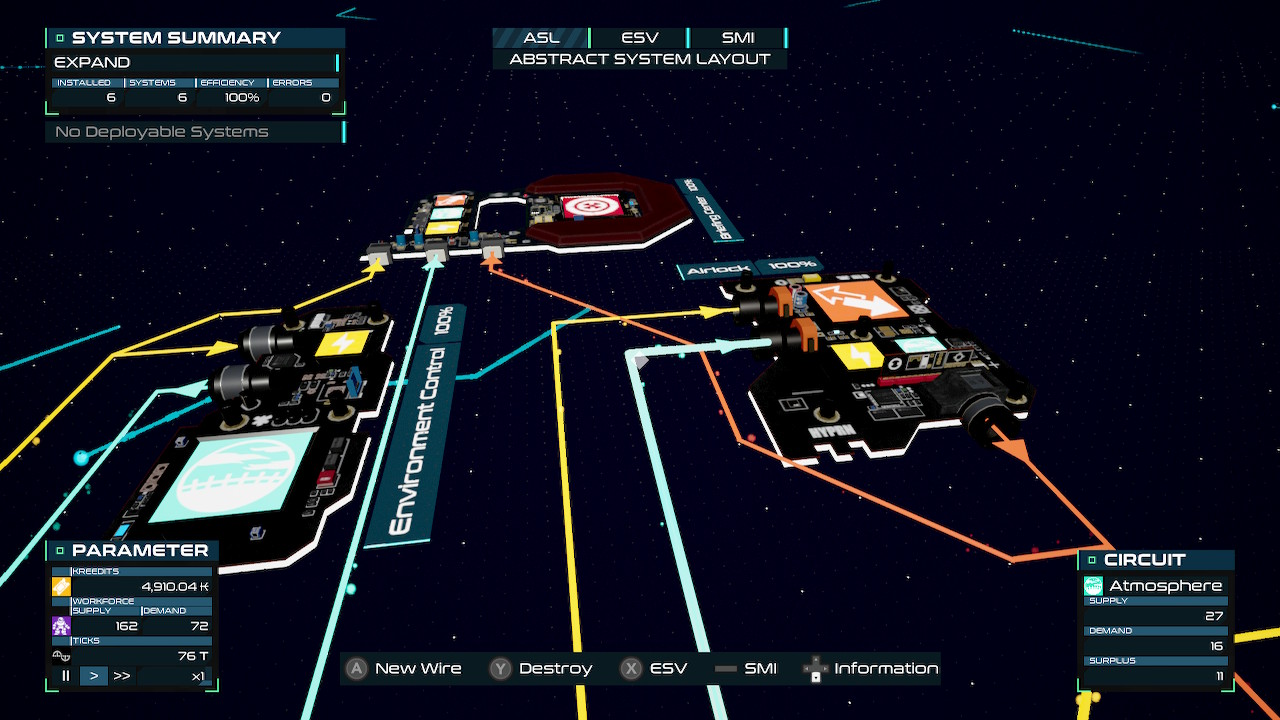 The balancing act here, of course, is keeping those needs met while dealing with the costs. You need power and life support for the crew, who do all the work, but the crew also wants an airlock, which also needs power and environment. The water synthesizer is installed and works, but just one won’t support all your needs. That means building an additional component with an orange anchor, which costs Kreedits in maintenance. Every tick. 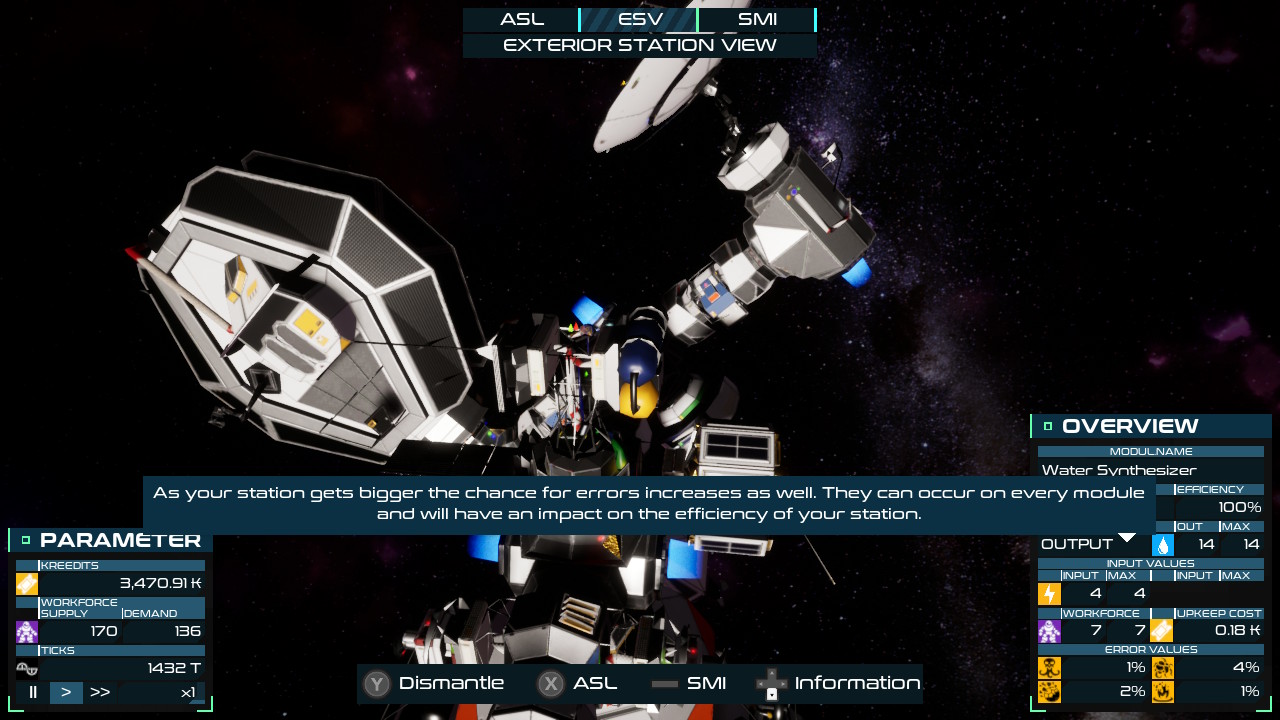 So, how do you make money? Well, you accept missions. Missions have flavor text that explain what the job is, but that’s completely irrelevant to the game; whether it’s a military job, research, or scanning for extraterrestrials, all that really matters is having the correct system components to take it on. But, once you do, those components are tied up and can’t be used for other jobs. Also, you don’t get paid until the job is finished.

The other part of the jobs page is research and, if you’re playing a scenario, Story Missions, which move the plot forward. Research (obviously) gives you access to new components and, somewhat oddly, are not unlocked by previous technologies but by adding population to your station. Story Missions must be completed to finish the level. You need to be judicious in pursuing either of these, however; they can take a very long time (tying up components), and you don’t get paid for them at all. 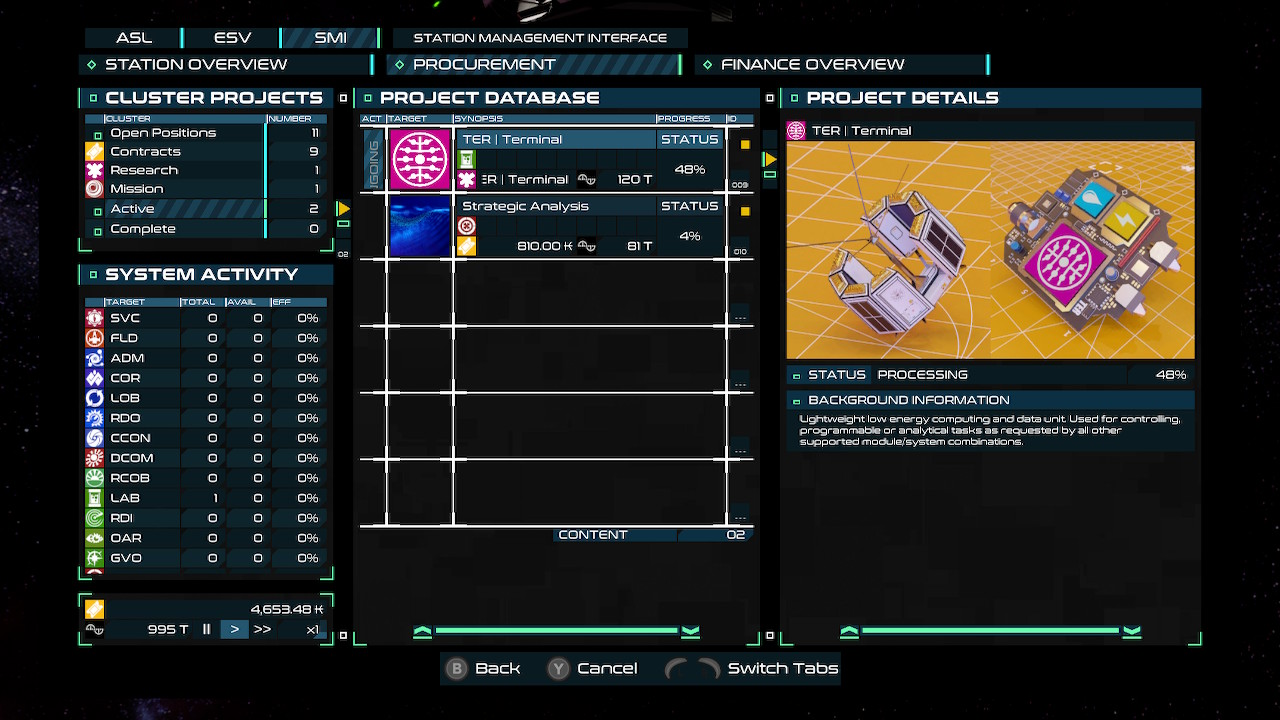 This brings us to the other part of the game: managing your money. The only way to earn space bucks is to complete missions, and every tick you’re burning cash in maintenance fees. There’s no passive way to earn income, and if your cash reserves run into the negative, you can’t build new components. In addition, if you reach -5000 Kreedits, the game is over.

The game gives you a financial lifeline by offering loans from three (and only three) banks. Take out a loan, and you pay it back at the interest rate they offer (which changes every 20 ticks or so). The messed up part about that is one bank offers low interest rates, while the other two can offer them for huge percentages. Once you take a loan out from a bank you can’t take another one from that bank until it’s paid off, and if you’ve taken out a loan from all three, there are no more options.

orbit.industries is one of those games where the interface is the game; learning how to play, how to connect everything, is the point, like Lego or an erector set. Completing a scenario doesn’t lead to another stage, you’ve just done that. 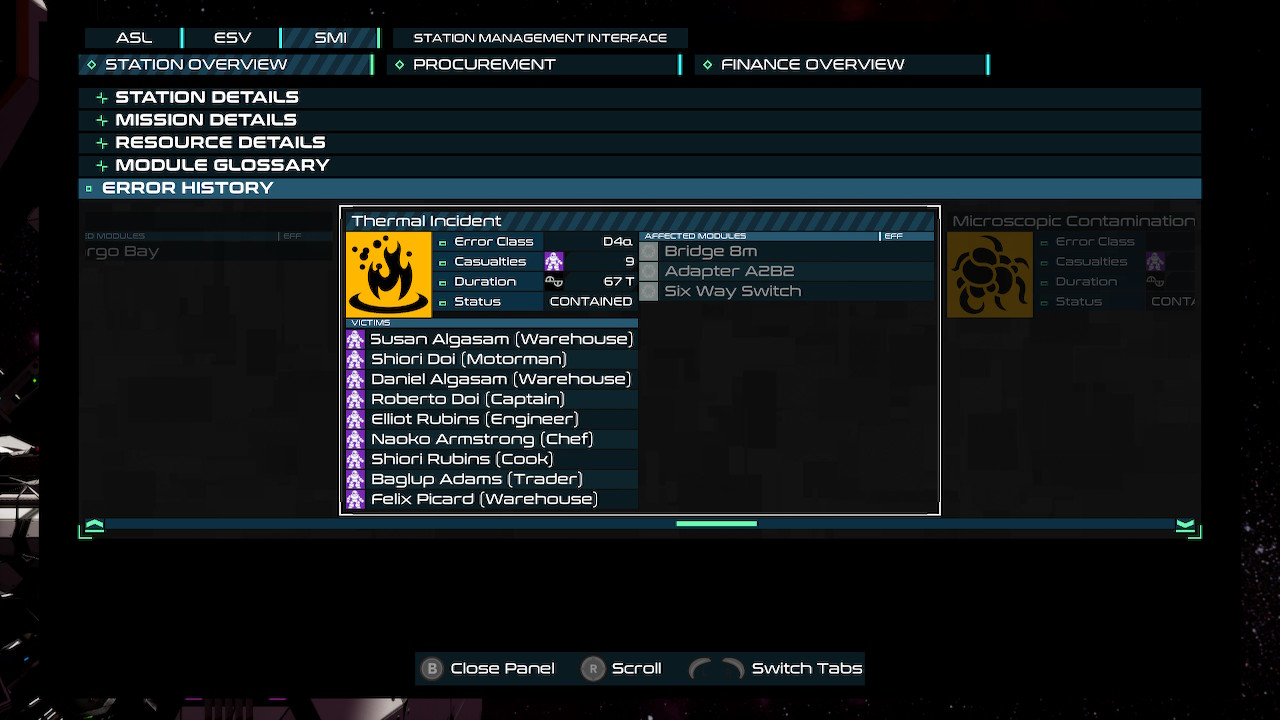 Another issue you’ll have to deal with is “errors,” which run from bacterial infection to computer problems to terrorist attacks. These affect the efficiency of your structures, and can spread until contained over time or halted by support structures: pressurized doors, guard posts, and teams devoted to handling them.

One big knock against the game is the lack of clarity in the tech tree. You need certain techs to use certain components—a water synthesizer to cool the solar array, for example. But as you get into the game you start learning technologies without the prerequisites, and in early gameplay you can end up building structures that aren’t operational. 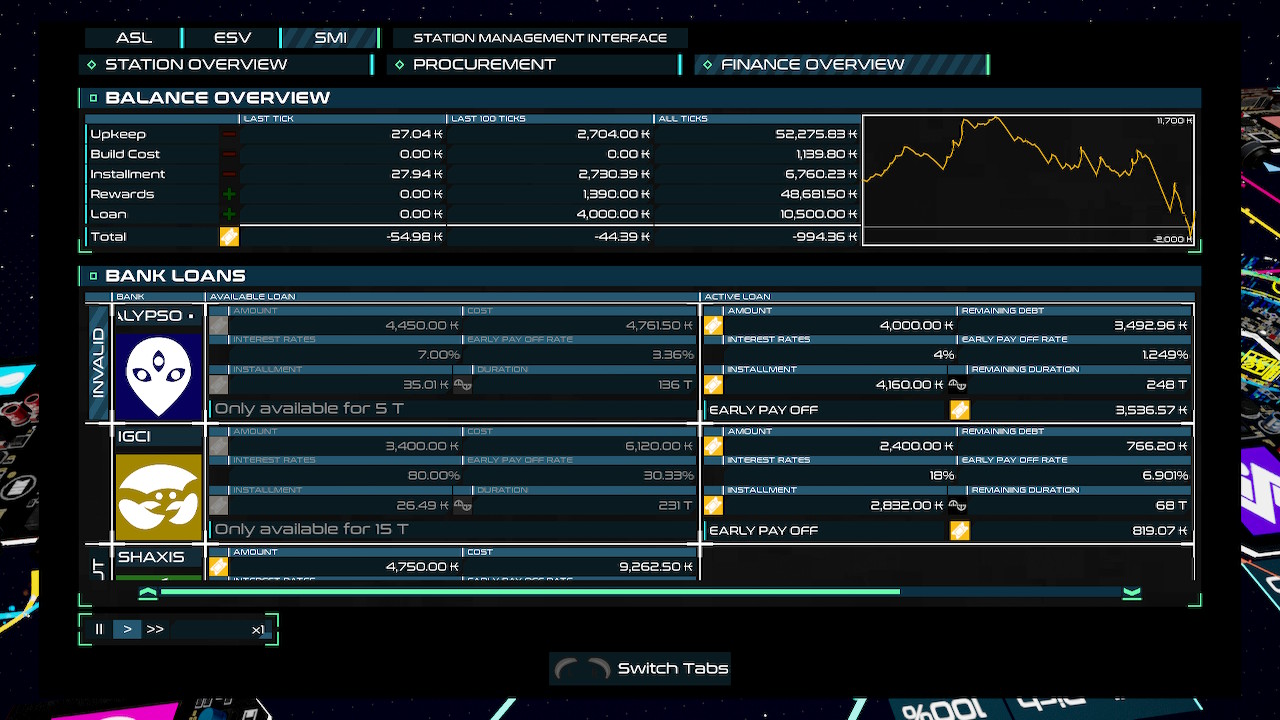 Compounding this problem is that while every resource has its own symbol, the colors of different symbols look too much alike: different shades of light blue, for example. Also, the contrast between the symbol (always white) and the background is awful, making it hard to tell what needs to be built or connected.

But if you’re looking for an endless toy box to play in (and there are options to play without a scenario goal or with unlimited funds), then orbit.industries is a fun diversion. Learn, and fail, and start again on your way to the stars. Just don’t forget about the interest rates.

If you’re looking for an endless outer space toy box to play in (and there are options to play without a scenario goal or with unlimited funds), then orbit.industries is a fun diversion. Learn, and fail, and start again on your way to the stars. Just don’t forget about the interest rates.