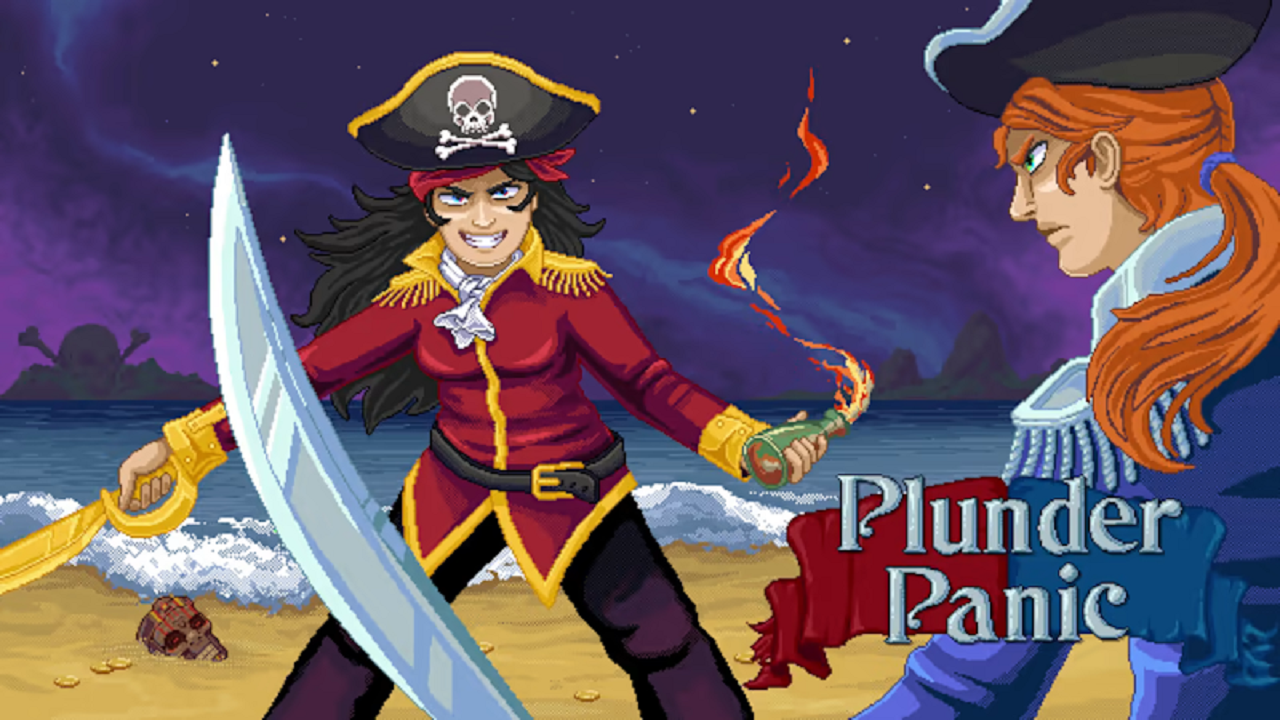 Plunder Panic is an arcade-style, free-for-all pirate fighting game. It features two pirate gangs competing in a capture-the-flag-style game to come out on top. The layout reminds me of the multiplayer version of the original Mario Bros. arcade game. There is always a lot happening on-screen, but several fun ways to come out victorious.

You choose your team at the beginning from a mix of different-looking pirates and even some monkeys. You assign yourself as captain as you fight other pirate gangs in a race to see who can be the first to kill the other captain, steal the most gold, or blow up their ship with cannons. These are usually resolved pretty quickly, and I was happy to see that the CPU was well-versed. Your goal is to do one of these three objectives before your opponent.

The graphics remind me of ‘90s-era games. There isn’t a ton of diversity in terms of level design. But they do find fun ways to keep it fresh by including interesting backgrounds. For example, there’s a volcano spewing molten rock, Neptune’s castle with mermaids popping out of the water, and a haunted castle background featuring ghosts and gargoyles.

The level creation is unique and fun. The gameplay, however, leaves much to be desired. It gets repetitive quickly since there are only so many moves you can do in this strictly 2D format, and there isn’t a ton of movement on screen that you can do. For a fighting game, I wish there were more possibilities to attack the enemy outside of just jumping and attacking head-on. After a couple of levels, continuing the game felt pretty redundant.

Plunder Panic seems like it would be a better fit in an arcade at a pizza parlor in the ’90s, not on the Nintendo Switch. The lack of movement, basic attacks, and simple level design doesn’t translate well to this system. This is the game where you just smash the same buttons over and over, and, hopefully, you land an attack quicker than your opponent. I could do that on my Pro controller, but I definitely wouldn’t want to do that if I were playing handheld and risk damaging my system.

All things considered, this is a nostalgic game that can be a good way to kill a couple of hours with friends or family, locally or online. I wouldn’t suggest playing this by yourself as it does grow stale quickly, but playing against someone in the same room would make this more fun and competitive.

If you enjoy multiplayer arcade-style games, you will enjoy Plunder Panic, especially in a party setting. But the graphics are limited, and stage designs (despite some creative backgrounds) don’t differentiate much. Add in the overall repetitive nature, and this one is just fair.