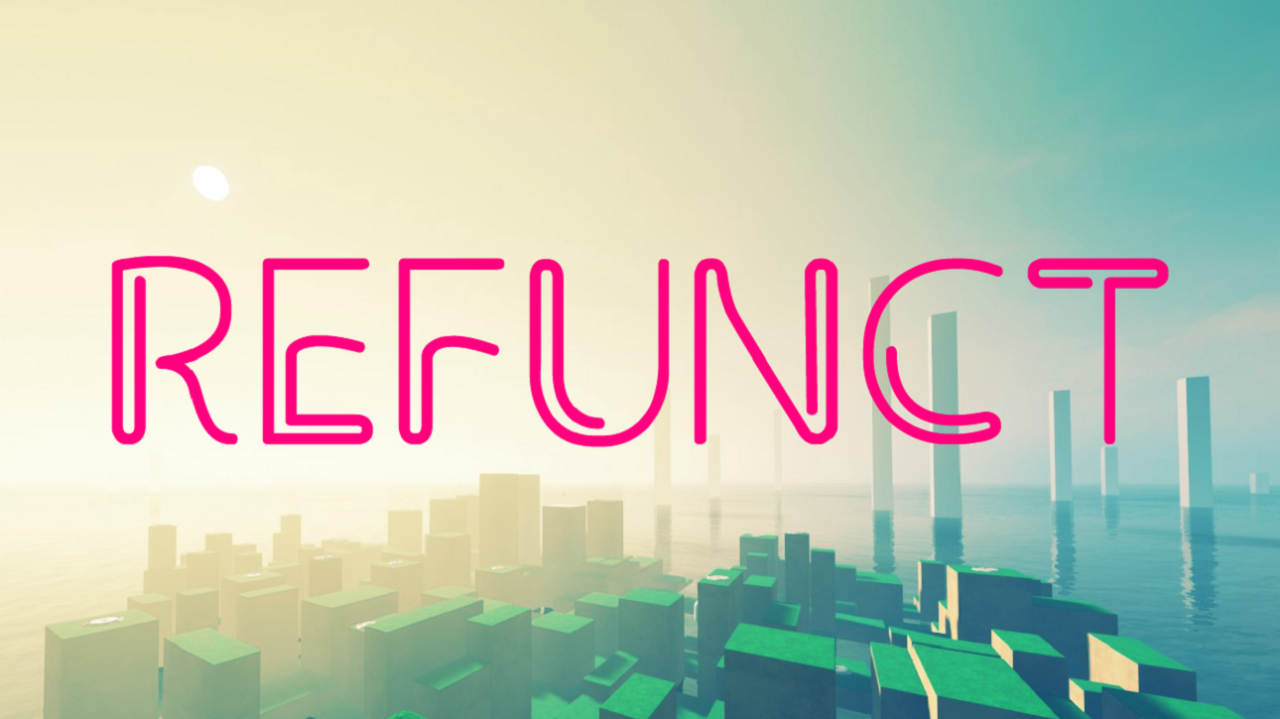 Refunct initially seems like a promising first-person platformer, but it ends just as it starts to pick up momentum. I finished the game in just under 40 leisurely minutes. Admittedly, this is nearly 10 minutes more than the advertised “Half an hour of uninterrupted quality playtime” but it wasn’t enough to leave me satisfied.

My discontent didn’t stem from the controls, thankfully. These are integral to first-person platformers, and Refunct has the necessary precision. A touch slippery perhaps, but jumping (and even wall jumping) can be pulled off with positive results for those with any experience (there’s no tutorial) in the subgenre. There’s also a measure of customization as you can invert and adjust the sensitivity.

As the game has no story to speak of – you’re “restoring a vibrant world” – the aesthetics have extra weight to pull. They’re fine for what’s here, without being particularly memorable. There’s only so much you can do with stone pillars. A day/night cycle does provide a bit of extra pop. The soundtrack is quite nice, although it doesn’t necessarily fit with what’s taking place on-screen.

The game has you hopping from pillar to pillar, covering the stone with grass, and seeking out a red button which raises additional pillars out of the water below. The underwater area feels unrealized to me. I appreciate that you can’t drown (there’s no way to fail in the game) but all it does is provide a glimpse of what you have left to raise, which seems like something of a waste.

Occasionally, you’ll find small cubes to collect. Other than contributing to your completion percentage, these seem to do nothing else. I was content with my 95% finish, and felt no real desire to seek out any remaining stragglers. I think Refunct will struggle with replay value. I wish more had been added to this Steam port.

This game reminds me of a title I reviewed not long ago, Feather, another peaceful release with an enjoyable soundtrack that felt more like a proof of concept. Thankfully for Refunct, it comes in at less than a quarter of that games price. Is it worth the low $2.99? Probably… but just know that there really isn’t much here.

Refunct feels like the promising start of something bigger and better. Despite some real potential, it ends up bringing little that excites or leave much of an impression, due to its scant half hour or so of gameplay. It’s priced right, but Refunct might be a game you only play once.

Refunct feels like the promising start of something bigger and better. Despite some real potential, it ends up bringing little that excites or leave much of an impression, due to its scant half hour or so of gameplay. It’s priced right, but Refunct might be a game you only play once.