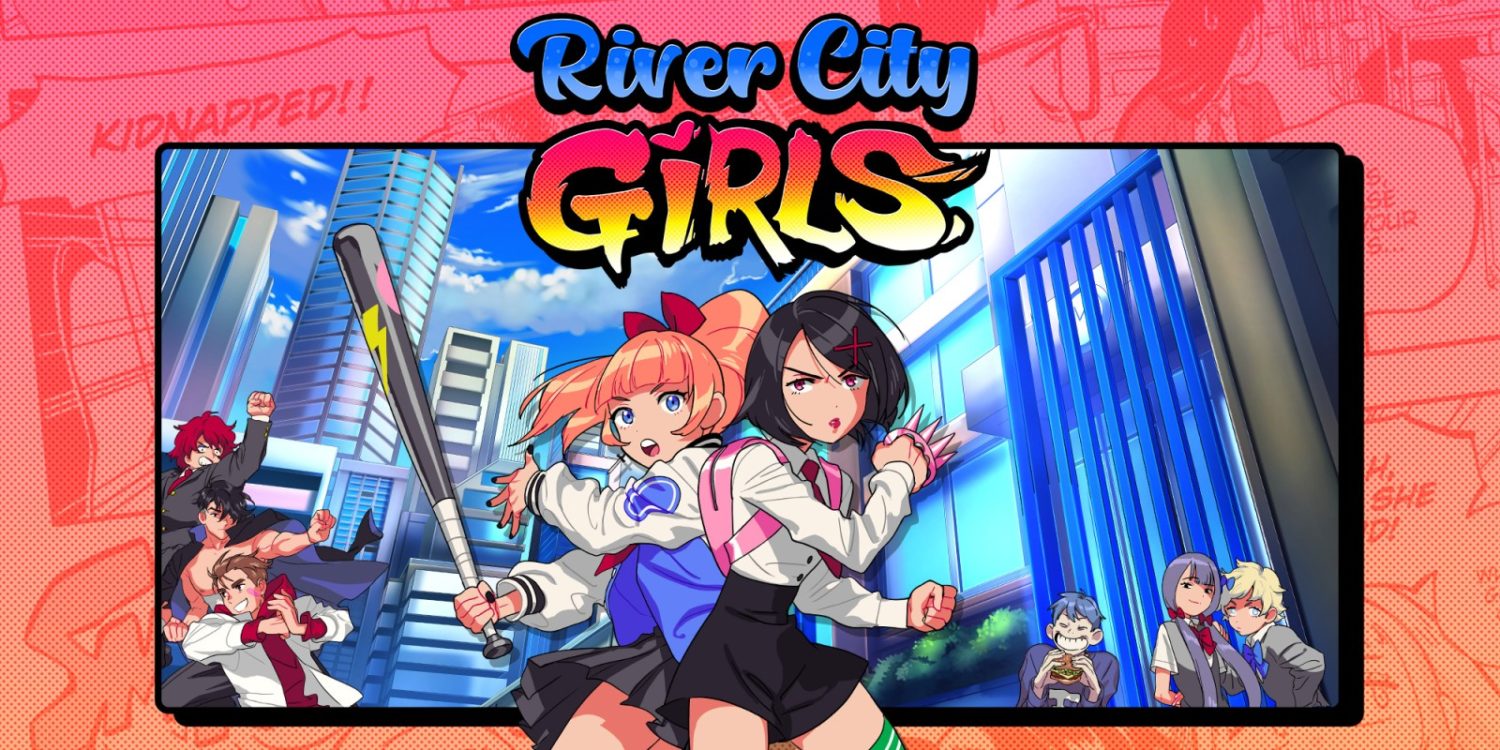 When dealing with any form of a 2D arcade beat ‘em up, one would likely assume to not expect much depth or even substance in the entire package. However, in the case of the WayForward developed River City Girls, you quickly begin to see how a genre filled to the brim with various copycats and homages can somehow surprise you with a fun and colorful presentation. River City Girls is yet another take on the classic arcade beat ‘em up River City Ransom but with a gender swap spin that simply delights. You play as feisty high schoolers Kyoko and Misako who must pummel their way through the mean streets of River City to rescue their kidnapped boyfriends (and protagonists of the original River City Ransom), Kunio and Riki. What soon follows is a comically bright and entertaining romp which equally parts mixes things up in its gameplay while adhering to the usual tropes of the beat ‘em up genre. 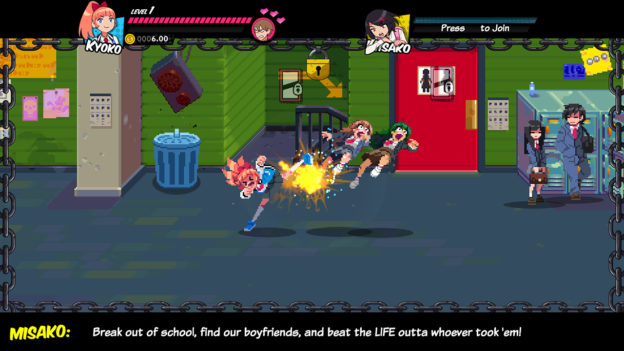 To get a sense of what River City Girls’ tone is, right from the get-go the game throws you into a chaotic setting of… high school detention, of all places. Immediately afterward, Kyoko and Misako are thrown into fisticuffs with fellow classmates ranging from cheerleaders to preps to punks as they attempt to break out of school to find their boyfriends. Yes, the story of the game is indeed a familiar one with a kidnapping plot (as you’d expect from the origins of this game), but throughout the journey you’re delivered a heavy dose of humor and charm that makes it feel different from the pack. I mean it’s not every day where you have a retro-style beat ‘em up that has you fighting zombies in a trash compactor or duking it out with cheerleaders in a classroom with an education film about puberty playing in the background. From high school onward, you are tasked to traverse through six areas of River City, which are all interconnected, so it kinda feels a little Metroidvania-esque but with bus stops as your means to warp. 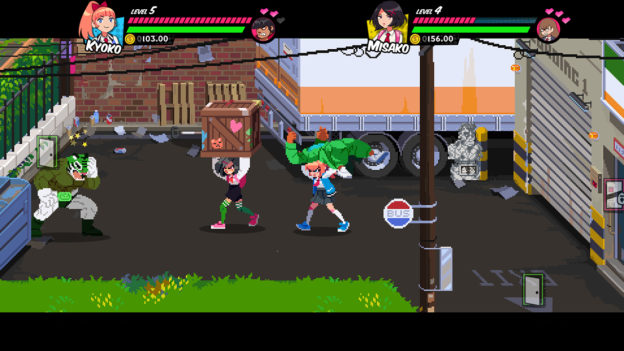 Choosing between Kyoko and Misako doesn’t necessarily come with many differences aside from obvious cosmetics and their unique pixel animations in how they punch, kick, and stomp various enemies. Now, with any standard beat ‘em up, it would seem that the combat here wouldn’t be really deep. Well, surprisingly enough, as you level up either Kyoko or Misako, you are able to buy new moves from the Dojo’s located throughout River City. These moves can lead to some incredibly satisfying combos while also looking great in their 16-bit pixelated aesthetic. Although, I did find myself a little frustrated trying to execute some of these if I were to be ganged up by more than three enemies on screen. But, if you do find yourself in a pickle, you can always recruit an enemy when they’ve begged for mercy after an ole fashioned beat down. These recruits aren’t necessarily by your side at all times on screen but rather can be called upon with a simple button press for a quick assist. All that aside, from volleyball spikes to a literal rainbow-infused dab, the moves you obtain from the Dojo are enough to make you crack a smile as they play out. 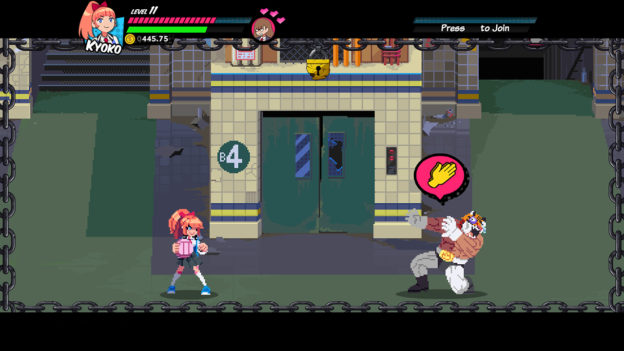 Aside from the varying moves, you get to purchase, you also have items to help boost your power and stamina. These perks can either be increasing the chances of defeating an enemy with one hit or increased damage against male or female foes. The only downside to this is that you can only apply two of these items at a time. Back on the subject of combat, I will say it should be noted that there are two ways to approach. One is either mindless button mashing or putting together well-placed combos to ease your way through wave after wave of enemies. The former may be the easy out for the early going, yet the latter proves to be the most effective when the difficulty ramps up. This is evident especially during boss battles, which ebb and flow between beatable with easy patterns to rage-inducing with little room for error. Also, it doesn’t help that your quick attack is mapped to the Y button, which also is used to enter and exit different points of each area. There are many moments where I found myself fighting enemies at one corner of a level only to hit said button and exit out of battle onto the next screen to simply start over again. It’s an annoyance, yes, but one where I had to watch out for myself when backtracking to get cash or level up either Kyoko or Misako. 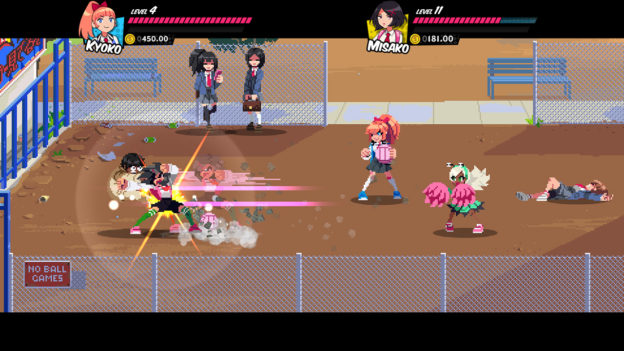 Minor quips aside, the main drawback I found with River City Girls is that the latter half’s difficulty can be rough solo if you are not well prepared. As mentioned beforehand, some boss battles had me almost wanting to snap into an utter rage. Luckily, after the umpteenth attempt, I prevailed, but would only realize that two-player co-op made these scenarios way less stressful. If you want to avoid this fate, either level up and come stacked with healing items or find a friend to help you blaze through the five-hour experience.

Regardless of these possible roadblocks, there’s still loads of fun to be had with River City Girls. Whether it’s the stylish pixel art, pulling off combos, or the occasionally funny dialogue that leans heavily on Internet humor, I easily found something that made me smile. One moment in the back half of the game had me fending off Schwarzenegger/Terminator inspired enemies who all made Arnold-esque grunts when you’d punch or kick them. Small details like that in a brawler of this type are easy for me to utter a small laugh or two. 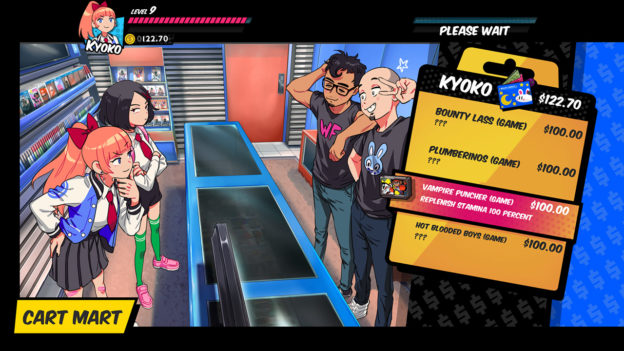 The presentation alone in River City Girls is both colorful, vibrant, and popping with cartoony detail as you’d expect in a WayForward title. The few anime cutscenes and black and white manga story panels used to introduce bosses and background exposition for different characters are a great highlight that add to the game’s quirky atmosphere. One aspect that should not go ignored is the music, which has a chiptune, synth-pop, and alternative rock infused soundtrack that includes the likes of Chipzel, Christina Vee (who also voices WayForward’s Shantae), and NateWantsToBattle. The title track (which is performed by Vee while also serving as the game’s voice director) that first appears before starting the game is enough of an earworm that it certainly earns the title of dope as its lyrics suggest.

While River City Girls doesn’t drastically reinvent the wheel for beat ‘em ups, it does at least bring some new flavor and surprising depth to a genre known for mindless fun. Sure, small annoyances are here and there, and playing solo can at times prove to be more than you bargained for, yet it makes up for it with its expressive characters, fun combat, and overall stylish look. River City Girls is essentially the type of game and genre combo that WayForward excels at with care, grace, and colorful results.

River City Girls is a vibrant, colorful, and surprisingly fresh take on the classic beat ’em up series. While small annoyances may hinder its pacing, the overall package from WayForward still packs a few good kicks and punches.