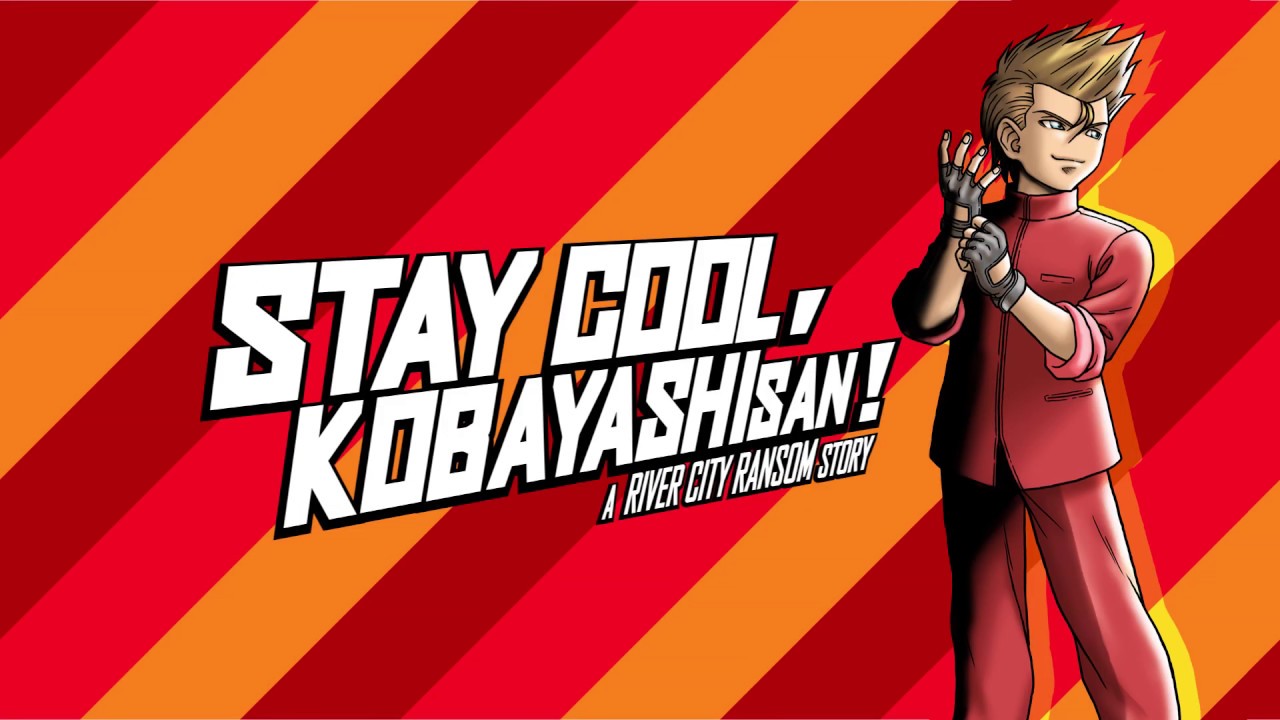 I will admit right off the bat that the Kunio-kun series of games is something I have only been really familiar with because of the River City moniker. For years, this series of beat ‘em ups (and various sports titles as well) would occasionally catch my eye briefly with a few revivals on the Nintendo 3DS and, well, nothing else. Then came the colorful, fun, and vibrant River City Girls, which opened my eyes to maybe giving this long-running series a second look. Enter Stay Cool Kobayashi-san!: A River City Ransom Story, which puts you in the role of the main series feared, hot-headed rival, Kobayashi, for his own game. This 16-bit inspired beat ‘em up seemed at first glance it would be another good romp; however, I would soon discover that in a rather incredibly short time that it felt flat, boring, and lacking in options that the Kunio-kun series often offers. 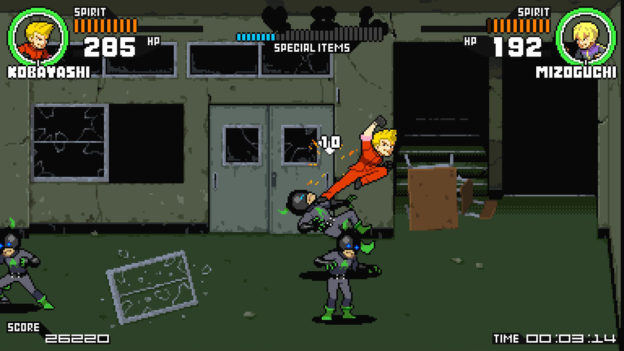 The best way I can describe the plot to Stay Cool Kobayashi-san! is that it’s, well, a bit bonkers and quite convoluted. To put it quickly, at one point in middle school Kobayashi befriends a boy named Mizoguchi who is actually a Time Regulator. Mizoguchi is here to fend off an evil organization that is disrupting space and time which soon leads to Kobayashi discovering unique powers of his own. When Kobayashi’s friend is kidnapped, it’s up to him and this mysterious time traveler to save the day. Did you get all that? Suffice to say, this story is out there and can easily be relegated to the back of your mind when playing through this short affair. Whether dealing with Time Regulators, drones, or various robot bosses, there’s little here in the story to grapple onto without it feeling super bland.

Now the classic beat ‘em up gameplay with Stay Cool Kobayashi-san is pretty much standard from what you’d expect with many Kunio-kun titles. The main exception here being that there are no weapons to pick up or use, no ways of enhancing your stats, or any forms of leveling up either of your characters. It’s just you and your ally with simple attacks (Kobayashi’s power up attack looks almost akin to something you’d see in Dragon Ball Z) as you must punch and kick in a semi-nonlinear fashion. Before you start the game, you are asked to choose several options for Kobayashi. For starters, you must select either love or friendship as your main emotion associated with your kidnapped friend (male or female) along with choosing three items that have memories tied to Kobayashi. Your choices here along with your in-game actions will affect the outcome of the ending, of which there are 20 in total. 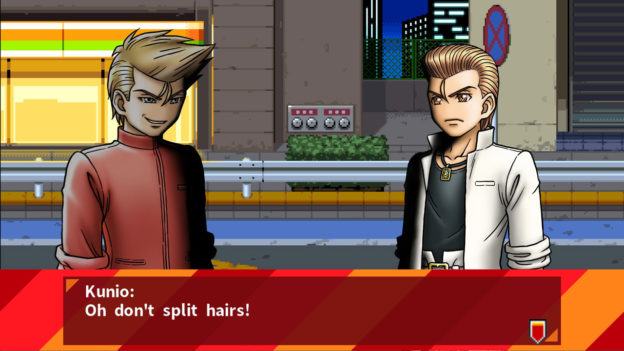 You can cycle between Kobayashi, Mizoguchi, and also series protagonist/fan favorite Kunio with the press of either the L or R buttons. There tend to be moments when dealing with multiple enemies that cycling through each would be messy. You see, Kobayashi, whether controlled by you, a friend, or as a CPU must always be on screen. In addition, even if you are not controlling Kobayashi and he is defeated, it’s an instant game over (or in this game’s case, it’s Mizoguchi rewinding time to the previous screen like nothing happened). This, unfortunately, makes controlling Kobayashi your main priority since I found various times your CPU allies are less than helpful. So, your best bet in this instance is simply to grab a friend in co-op to avoid say seeing the CPU not contribute a good enough fight. Also, even when Kobayashi’s health hits zero, you can use a well-timed press of the jump button to avoid not fully collapsing on the ground in defeat. Despite a limited move-set, this became crucial for me when in tough situations with zero help from my ally.

Luckily, you have three special items to use in the form of recovery, helper, and power-up. These can be accessed when defeating enemies which fills up a special meter. When full, using each ability will cost a certain amount to execute. So, for example, recovery uses the least amount of it, helper uses half of it, and power up requires emptying out the whole meter. The recovery and helper abilities were some that got the most usage for me since I would find myself employing helpers while allowing myself two chances at using recovery. In the case of using helpers to fight off enemies, it almost seemed they did far more damage to grunts and bosses than what my CPU ally would do. 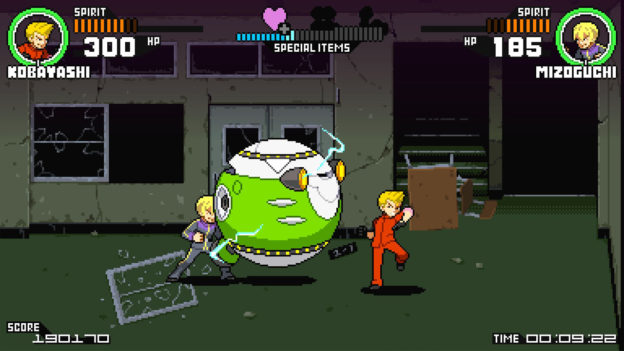 When progressing through, you are asked to defeat a set of 30 enemies from five different colored henchmen. Once you defeat 30 enemies, their leader will appear and a boss fight ensues. Taking down these things is easy and, yes, repetitive as it can be, but then comes a point when you are trying to find the last color set of enemies. These last bit of enemies appear at random, so this will require you to traverse screen after screen just to find these goons that look like Power Rangers enemy fodder. It also doesn’t help they let out annoying shrieks when they attack, so I hope you will adjust your volume settings accordingly. Honestly, though, The boss fights are the best highlight here. These battles are at least a nice change of scenery knowing there are only a few enemy types to weed through. In a surprise twist, the game will randomly put you in a UFO-like aircraft to briefly turn the game into almost a top-down shooter. In a game with such an absurd, confusing storyline and weird design choices, this felt more in line than you think. 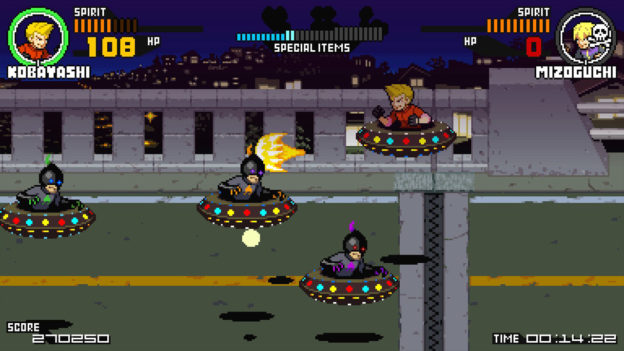 Overall, Stay Cool Kobayashi-san! may not be what some devotees of the Kunio-kun/River City series are looking for after what the fantastic River City Girls delivered a few months prior. The 16-bit retro beat ‘em up is simple to dive into but quickly becomes dull and forgettable. At a short length to complete, it barely had enough to hold one interest after the final boss fight. Even with various endings, you can go through, there’s little to no incentive to unlock them all out of sheer curiosity. The game has its moments with its boss encounters and overlaying quirkiness, but everything else is in short supply.

Sadly lacking all the options seen in previous entries, Stay Cool Kobayashi-san! may entertain longtime Kunio-kun fans but others will find it bare bones and forgettable.