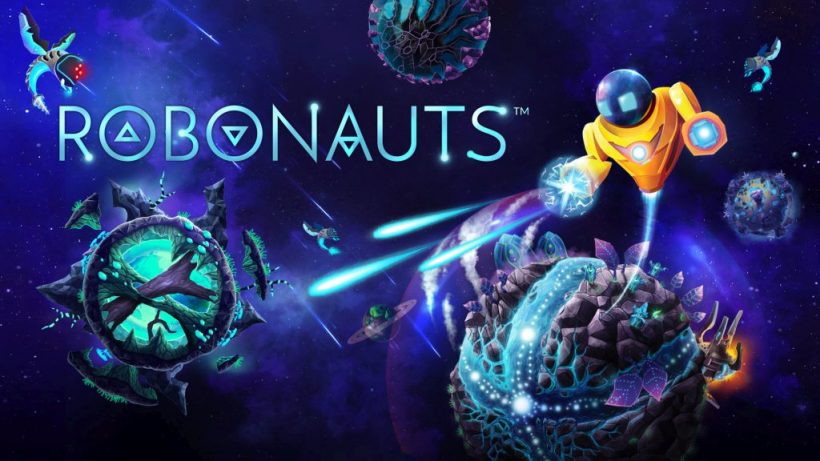 Robonauts is a mixture of genres and themes. The name itself evokes images of robot astronauts bravely defending planets. And that’s exactly what Robonauts is: a robot-themed platformer-shooter set in space. Which, thankfully, adds up to be an enjoyable ride.

You play the role of a robot, donning a suit of armour to save the universe. The gameplay is simple, with three basic moves: shoot your gun, launch a grenade, and jump. You’ll also pick up a multitude of other weapons to try out along the way. These have limited ammo but your default weapons are unlimited, so you can blast away to your heart’s content.

You’ll need that unlimted ammo because there are hordes of menacing, robotic creatures between you and victory. The enemies are varied in their attack and appearance, with spiky ones that jump, crab-like ones who hurl fireballs, flying ones that dive at you, and – the most troublesome – triceratops-like ones that shoot lasers. In some levels there are pods of some sort that spawn more enemies – it’s vital to take those out if you want to stop the onslaught. 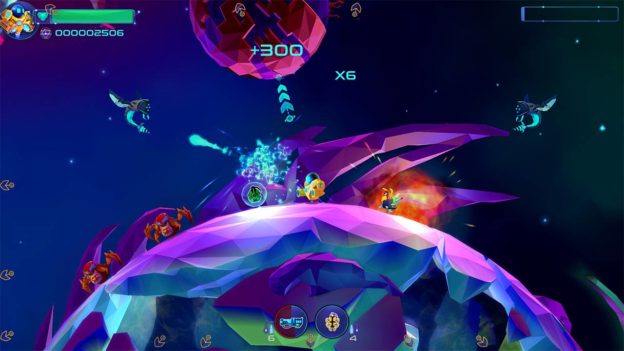 The main feature to set Robonauts apart is its unique use of gravity. Each level consists of several planets, which you can traverse between by pressing X when near the surface. You’ll usually be clearing enemies off each planet one by one before moving on to the next, but it’s also useful for a quick escape. Sometimes you’ll be close enough to another planet to shoot enemies upside down – it adds a slightly tactical element to the game.

Each of the game’s twelve levels starts with a brief description of the mission, which string together to form the story. Most missions involve simply destroying all enemies and making your way to the exit portal, though there is some variety sprinkled throughout. One level – maybe even my favorite – is completely devoid of enemies. Instead, you’ll be switching off crystals that open up pathways through a labyrinthine planet. Another standout – and one of the most difficult levels – is where you act as a bodyguard, protecting an ally who lumbers across planets, destroying enemy weapons. These variances are welcome changes; as with any shooter, there is a risk of things becoming formulaic and stale. 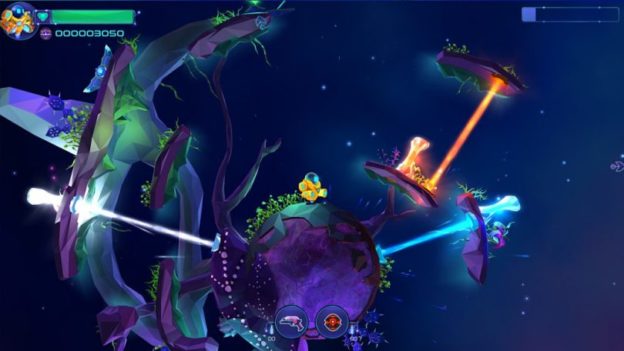 With only twelve levels in the main campaign, it’s not exactly a long game, though it will take several hours of repeat play to beat, even on casual mode. There’s also a hard mode if you want to make things really difficult for yourself. To shake things up, there are achievements you can aim for, though many of these – like making it through a level without taking a hit – are borderline impossible. Still, if you’re up for the extra challenge, it’s there.

You can also opt to play through the campaign with a buddy, with is surprisingly fun, and slightly easier – though more enemies exist to compensate. Then there’s a VS mode, which provides a selection of levels with basic objectives like eliminating enemies to build the highest score. Other modifiers change each session, such as toxic planets that deplete your health. 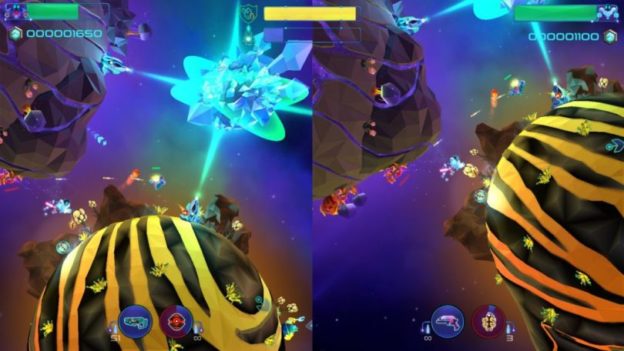 In the graphics department, Robonauts performs extremely well, with a style that depicts a colorful sci-fi world. Planets and enemies are well designed, with one very cool boss that literally comes out of the planet you’re walking on. One downside is that this was the only boss I encountered, and it was right at the beginning of the game – I was looking forward to more of these types of surprises. There are some nice little details thrown in, like when your robot’s head falls off and rolls away if you remain stationary too long. The game also works well in both handheld and docked mode, with no noticeable slowdown during multiplayer sessions.

One of the best aspects of Robonauts is the soundtrack, which is just fantastic. As mentioned, each level begins with an introduction that contributes to the story, and the audio matches with an intro beat that builds into something spectacular when play begins. The tunes are catchy, like pop music crossed with electronic, almost industrial, sounds – I felt like I was playing through a robotic nightclub. It absolutely suits the game perfectly. 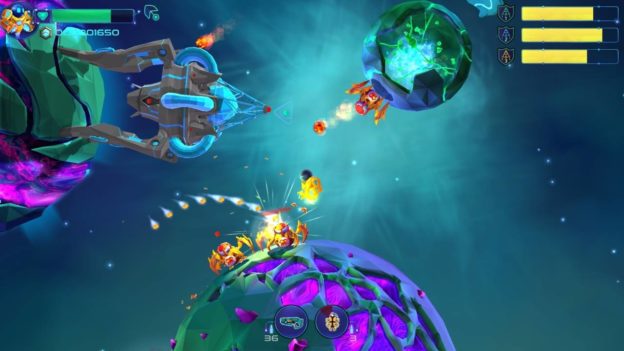 Overall, I had a blast with Robonauts. This is a fun, well-designed platformer-shooter. It’s easy to learn but hard to put down – I found myself wanting to replay those harder levels until I conquered them. The great audio plus the unique gravitational elements help the game stand apart, despite some repetitive gameplay. The only real downside for me was that it was all over after twelve levels.

Robonauts is an addictive game, easy to learn, hard to put down. With great graphics and audio, and some fun diversity in the missions, this challenging shooter is worth checking out.