Saints Row IV: Re-Elected is a title I truly adored when it came out on the last generation of consoles, so when Nintendo announced it was being brought to the Switch I was excited to replay it again. I can truly say that after replaying this game several years later it is still an over the top experience riddled with innuendo, superpowers, crazy customization, and mayhem. I still love this insane tale of presidential proportions despite some gameplay problems and aged graphics.

Saints Row IV takes place after the events of Saints Row The Third and the gang known as The Third Street Saints have moved on to political ambitions with your character simply known as the boss; becoming the President of the United States. After stopping a terrorist attack, you are invaded by aliens while giving a press briefing at the White House and getting abducted by this species known as the Zin. From there you are transported to a simulation resembling a 1950’s sitcom, then the city of Steelport from your previous adventures. At this point, you are to stop this alien invasion by breaking the simulation. I thoroughly enjoyed this set up because it managed to escalate the previous entry’s antics while still making it believable for this universe. 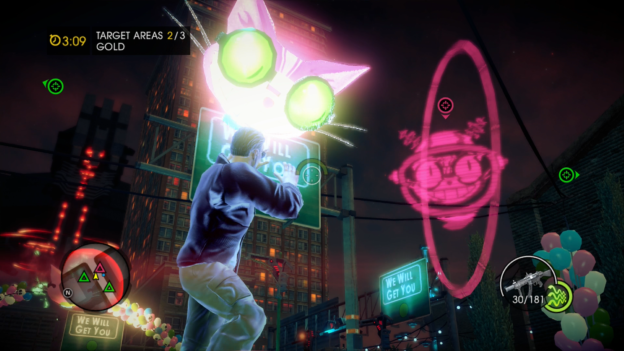 Saints Row IV is an open-world title similar to Grand Theft Auto, which means a huge chunk of gameplay is relegated to stealing cars and firing big guns. Yet with this entry, they introduced giving the main protagonist superpowers that range from super speed, super jump, and firing elemental blasts from your hands. I found that these powers melded well overall, however, I did have issues with it taking away the importance of vehicles and vehicle customization early into my adventure. There will also be plot points where you will have your powers taken away from you so you are relegated to use vehicles because the story needs it to work that way.

The gameplay is broken down into three categories; Main missions, side missions, and events. The main missions can either be quests that take place in the simulation where you can be doing a wide array of things ranging from reliving a character’s worst fears, collecting items, or blowing stuff up. Main missions can also take place within the real world where you break into Zin ships and dismantle something or save one of your crew members from captivity. The events are different little distractions scattered throughout Steelport that help get money and unlock new abilities and items. These events can range from hacking stores, stealing cars, and blowing up waves of enemies. While these events are fun and quick, they are tied to the side quests which means you can complete these tasks just by doing those missions. This means that the majority of side missions tie into those events, but there are loyalty quests that give you the ability to gain your crewmate’s trust while upgrading their abilities. I found all of these elements combined to work well together and combining elements of each to other aspects of the gameplay made all of the chaos feel manageable. 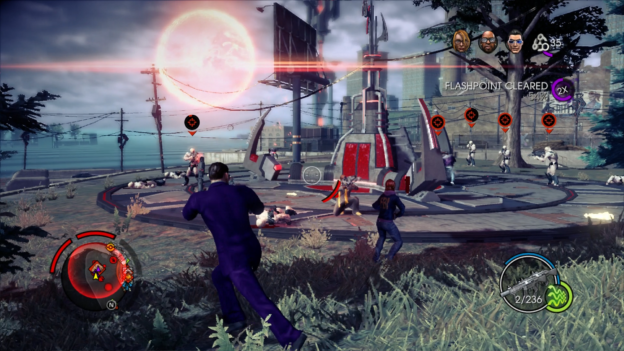 Customization is a huge part of this franchise and that is no different from this installment. You can customize everything from your character’s outfit colors to how your rides look. I found that I could create almost anything I could imagine with the tools that the game gives you. While the game does start you out with a minimal amount of clothing and weaponry to accessorize with, it becomes apparent early on that this game wants you to be able to create the zaniest things you can think of with how inexpensive cosmetic items are compared to actual skills and power upgrades.

Graphically, this game is exactly how I remember it, and its age shows greatly when you compare this to current generation games on the platform. There are moments consisting of watching characters talk to each other out of cutscenes when their lips don’t move or when the boss gets hit they will ragdoll around. Outside of those minor instances, the game looks alright for a game that was released seven years ago.

Saints Row IV is a great game that has only aged in appearance. This title is still a lot of fun to grab and revisit, especially now that’s on the Switch. Despite some odd plot devices and making the use of vehicles pointless, this is still a fantastic game to pick up. If you have a Switch and are looking for a great open-world game to fill your free time, this might be exactly what you are looking for. But if the concept of Saints Row sounds appealing to you, but you don’t care for the crazy superpower antics, then Saints Row: The Third might be for you.

Saints Row IV: Re-Elected is a logical continuation for such a nonsensical series. Despite some issues with mission structure and some signs of age, this is still a very good superpowered thrill ride of presidential proportions.