Slime-san is an interesting and somewhat deceptive little title. It certainly looks different, with its retro-inspired graphics and simple yet odd color palette. But once you start playing, it becomes clear that this platformer is surprisingly deep and addictive.

The first thing you need to know about Slime-san is that it comes with a bizarre backstory. Here you guide a green slime named Slime-san through a worm’s stomach in an attempt to escape digestion. It’s actually a fun concept that plays out well, with Slime-san himself a quick and nimble blob who must dash through over 400 well-designed levels. 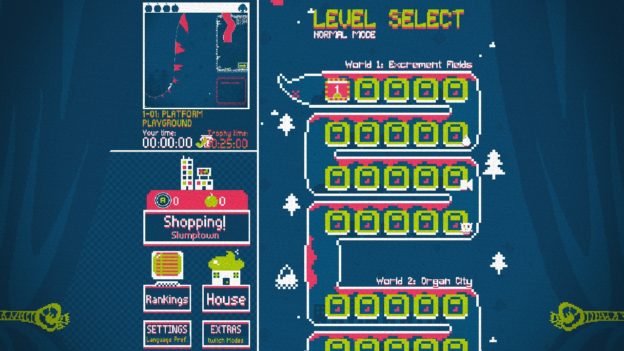 This is level select screen. There are plenty of options, including visiting your family’s house and a shopping district.

Each level is divided into four single-screen rooms, with the primary goal of making it from your starting point to the clearly marked exit. A short animation shows your slime moving between rooms, which both provides a short reprieve and heightens the intensity as you prepare for the next room of death.

Stages are short and sweet and very well designed, with diverse terrain to negotiate. You’ll dodge enemies, bounce on trampolines, navigate moving objects and platforms, dash, crash and repeat. To make things even more hectic, there’s a time element at play too: a giant wall of stomach acid is ready to move across the entire screen unless you can beat it to the goal. There’s a slight delay before the wall starts moving, indicated by a red timer at the top of the screen. 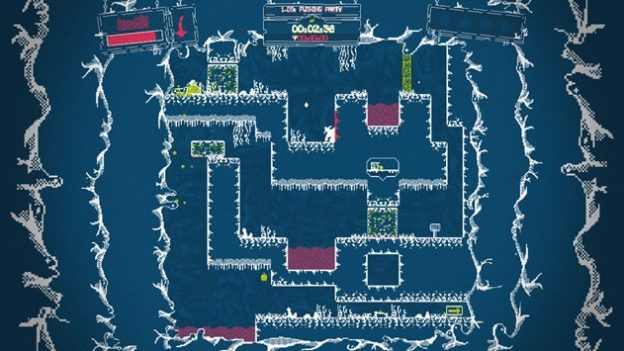 It’s really an odd-looking game, isn’t it? Try not to judge it on the look alone.

It’s frantic, to say the least, but it’s super addictive and, most importantly, it’s fun. The end of each set of four levels highlights stats on your performance, such as total time, total number of jumps and – obviously – total number of deaths. You can even earn trophies by beating the goal time – I never even came close to the trophy times, but I had fun trying.

Speaking of death, let me warn you – your slimy friend will die frequently! A quick respawn means you’re never frustrated at trying again (and again) and the bite-sized levels are short and sharp enough to keep you interested for quick bursts or longer binge sessions. With so many levels on offer, it could be a long session at that.

You can make the game even more difficult for yourself by attempting to collect partially digested apples along the way. These serve as in-game currency to be spent at Slumptown, a marketplace where you can purchase things like side art, or even new play styles. These play styles are actually alternate slime characters with different abilities, like higher jumps but slower dashes. It’s like playing with Luigi or Princess Peach as opposed to Mario’s steadiness. It all adds to a game that’s been put together with a lot of thought, creating a whole world to explore outside of the simple platforming premise. The game also has a lot of personality, with plenty of humor injected into the short cut scenes – particularly at the expense of worms, who are deemed the enemy here.

So let’s talk about the green and red graphics. Honestly, it looked strange to me at first, but the levels are cleverly designed with three main colors: red for enemies, white for neutral, and green for walls and objects that can be morphed through. These colors make up the retro-styled visual side to the game, which shouldn’t work, but somehow it does. The game even references and makes fun of its own “5-bit” look. It’s a little like an old Game Boy game, and once I’d made it through the first level, I appreciated the design much more.

The audio must also be mentioned, since it’s fantastic. The soundtrack is composed by chiptune artists, with a quick and bouncy pace that suits the gameplay perfectly. It enhances the retro vibe but also suits the speedy style of the game. It’s catchy but also varies enough to never become monotonous.

Overall, I really enjoyed my time with Slime-san, and with some free DLC on the way, I’ll be coming back for more. At $11.99 on the eShop, Slime-san is a worthy addition to your collection, particularly if you’re a fan of fast and challenging platformers.

This odd-looking game shouldn’t be judged from the outside. It’s actually a solid platformer with loads of content, including plenty to do outside of the main game. This is one platforming game to consider purchasing.