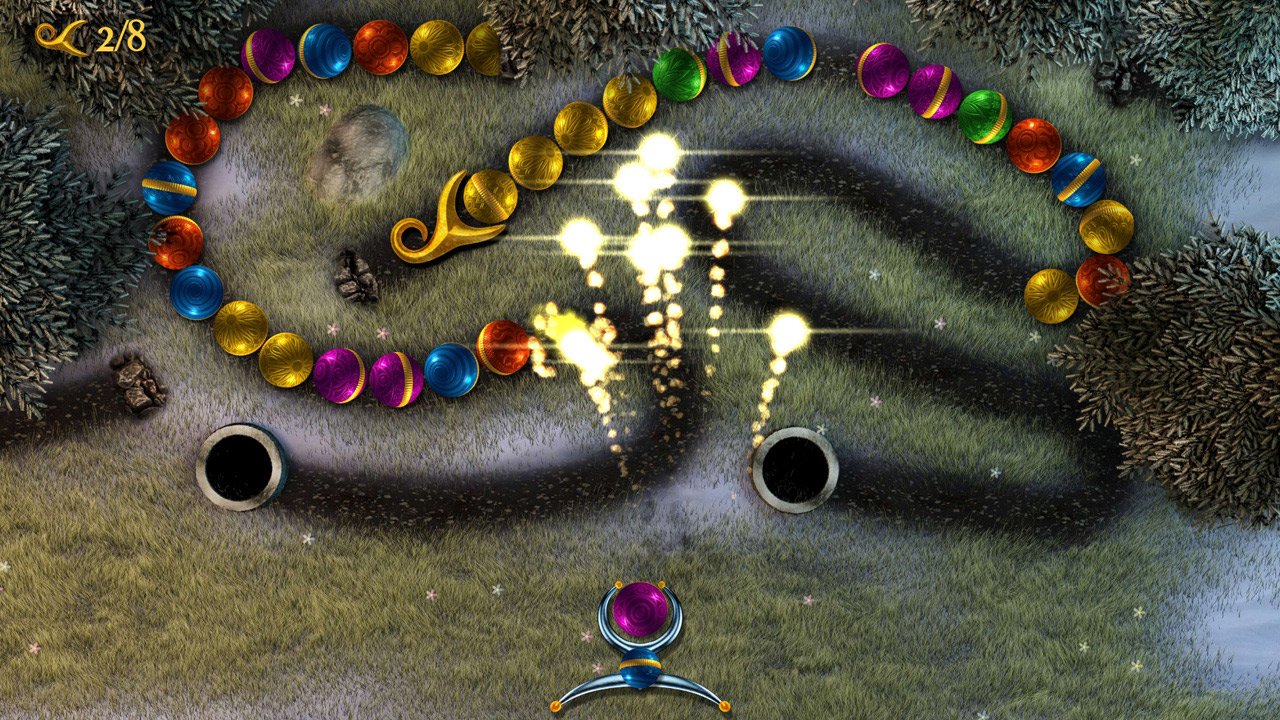 Sparkle Unleashed is a puzzle adventure that has you attempting to bring light to a darkened world. As you progress through over a hundred Magnetica-like puzzles, you ignite braziers that reveal further paths through various terrain. There are some eerie landmarks described as you journey past them but nevertheless, you always press on toward your final destination.

A chain of different colored marbles speeds onto the screen and progressively slows as it nears a dark hole at the end. Your job is to match three marbles of the same color until you remove all the marbles from the screen. The trick is that some marbles are chained so you have to match them twice. And some marbles are rocks so you have to match three next to them to get them to disappear. This proves difficult if there are several in a row. Most puzzles keep adding chains until you’ve removed eight of them. Some others keep the marbles coming to see if you can last an allotted amount of time. As the levels get higher, the chains get faster. You need both skill and speed to make it to the end.

If you read Jemma’s review of Sparkle 2, you already have an idea of what this game is like. However, there are a few notable differences. The trigger is on the bottom of the screen and scrolls side to side instead of being centered and spinning. Now you are trying to line up with moving targets from a greater distance. Also some levels have marbles entering from both sides of the screen. Trying to make matches on two separate chains at the same time adds a lot of challenge.

Every three matches in a row, you receive a power-up to help you. These may include removing some balls, aiding you in matching, removing all marbles of a given color or vaporizing part of chains. Since the chains speed up as you progress, these become necessary in order to finish. When you reach each brazier, you get a key to unlock more and better power-ups. I appreciated that I got to choose which power-ups to upgrade and when because I found some more useful than others.

A small variety of backgrounds and music are cycled through. The backgrounds fit the story of traveling through the wilderness with bridges and rivers and glens of varying weather. They are a nice backdrop for the puzzles. While the sound effect of clanking croquet balls fits, I personally found it off-putting and felt it detracted from the pleasant soundtrack. The instrumentals are both eclectic and enjoyable.

Sparkle Unleashed is a must have for puzzle fans. It has quick-moving puzzles, a great soundtrack, appropriate backgrounds, and a story to tie it all together. For just $7.99 the amount of content is extensive, providing hours of both relaxing and exhilarating entertainment.

For just $7.99 the amount of content is extensive, providing hours of both relaxing and exhilarating entertainment.