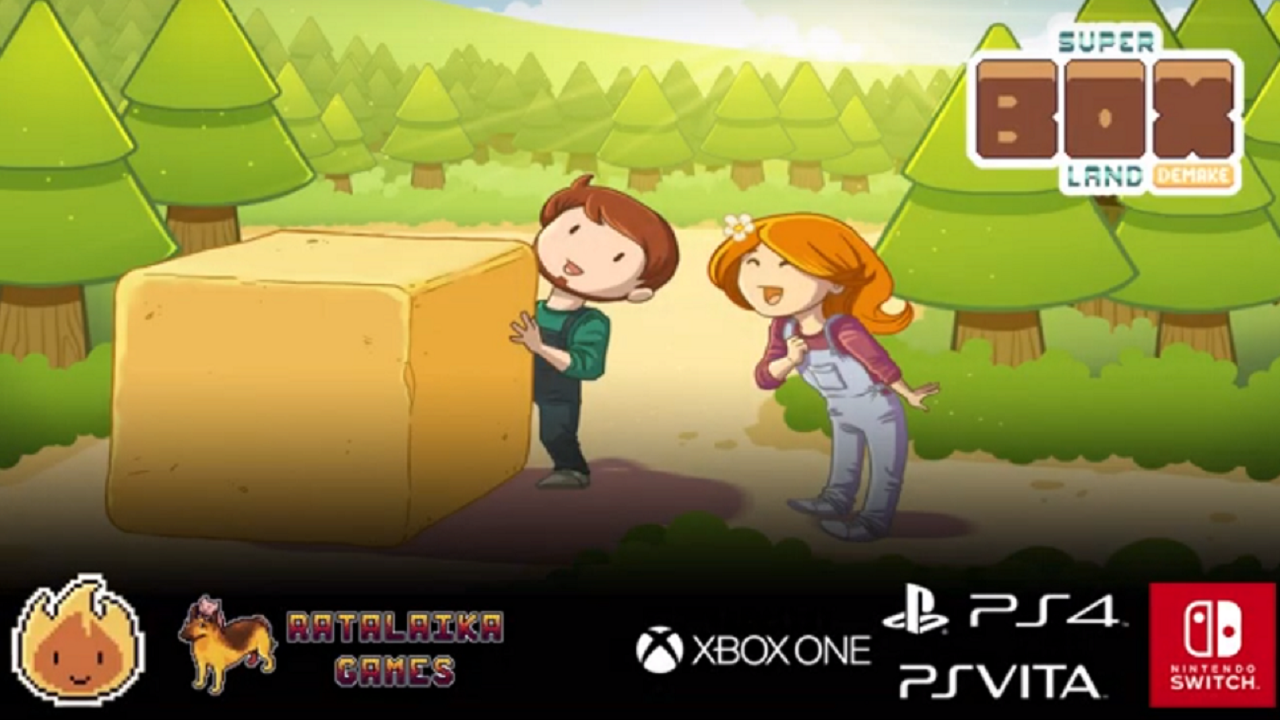 Remember Super Wiloo Demake? Well, Super Box Land Demake is a puzzle title in the same series. Except that this time you play as either an unnamed man or an unnamed woman. Seriously? At least Super Wiloo Demake had Wiloo and Agatha! I suppose that’s not important since you could use your imagination to wonder what these unnamed people are doing and what relationship the two have with one another. I liked to think they are a couple since it seems sweet to me for them to work together if they are. But it’s a mystery I guess.

Anyway, story lacking aside, Super Box Land Demake is a simple puzzle game that involves pushing boxes onto platforms to proceed throughout the levels within the worlds. You could play solo, controlling both the man and woman to push boxes, or have a friend join you and play the other character. I really enjoyed playing with another person. There’s something satisfying about figuring things out with a friend. It really makes you appreciate teamwork involved with difficult things.

After each world, you go into this mini shooter arcade-like game in a plane that you control to avoid bombs and shoot balloons. The balloons give you batteries to power the rewind capability allowing you to go back and fix your mistakes, but you can find batteries hidden in bushes throughout the levels. If you really mess up and run out of batteries you could always walk back to the last level you completed and then walk back to reset the level you are stuck on. Since the rewind feature is kinda short and only used for tiny mistakes you just made, I wound up resetting the level a lot.

That’s all there is to the game and, after playing Super Wiloo Demake, I kinda expected there to be more meat to it. Like having a story, or maybe even doing other types of puzzles besides moving boxes. It still looks cute visually and the music is good but I couldn’t help but feel slightly disappointed by the end result, even with one hundred levels to it, and three difficulty modes to shake things up. This game was too simple, making the levels less fun and more like annoying work. It goes by pretty quick too; I beat the game in about an hour.

Super Box Land Demake isn’t a terrible game, it’s just simple and not as fleshed out as its predecessor. It’s still charming, but not worth the same price as the last game at $4.99. If it goes on sale I would recommend picking it up since it is still a solid game, if a bit shallow.

Super Box Land Demake isn’t a terrible game, it’s just simple and not as fleshed out as its predecessor. It’s still charming, but not worth the same price as the last game at $4.99. If it goes on sale I would recommend picking it up since it is still a solid game, if a bit shallow.