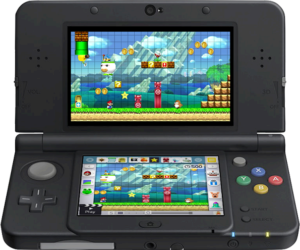 Super Mario Maker has already found a great deal of success on the Wii U. It has sold close to 4 million copies and won numerous awards – including the PN staff voting it as our Wii U GOTY in 2015. Certainly, Nintendo is hoping that by porting the game to 3DS, the much larger installed base will result in more sales.

Many reading this review no doubt already own the game on Wii U; is it worth a double dip? Some later adopters might be debating between the two versions. Still there are others that only own a 3DS. In as broad a way as possible, I’ll do my best to present the pros and cons of Super Mario Maker for Nintendo 3DS. 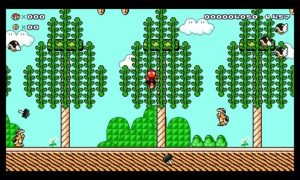 Super Mario Challenge is accessible right out of the box. This new mode presents 100 pre-made courses, mixing both classic and fresh designs. However, even in the case of the former, various tweaks make them feel more akin to layouts in the style of NES Remix! With optional objectives to earn medals, playing through the different Mario styles in Super Mario Challenge makes for addictive single player fun.

That said, Super Mario Challenge does have a curious attribute, namely that you must advance through it to unlock the full range of creative tools. I understand that the Wii U version divided some press with early access copies (it had a slower rate of making things available). While the impatient will be happy to have a wider range of options to choose from at the start, ultimately this could prove more of a limitation depending on your skill set. For better or worse though, creation isn’t the key element in SMM 3DS. 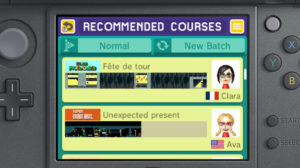 Going back to playing for a bit, SMM 3DS gives you access to select courses from the Wii U original, including the return of 100 Mario Challenge. Despite promising “the Wii U versions finest”, these recommendations definitely won’t always save you from subpar designs, but of course I’m not reviewing the creations of others. I did notice some slowdown on the busiest of designs. It is a much more narrow offering, as you can’t search for a course by ID; Nintendo saying this was done to preserve a “spirit of spontaneity” is, frankly, nonsensical! Nor can you follow anyone, or provide feedback by leaving a star (!) or even a Miiverse comment; you can’t even activate Miiverse unless playing on a new 3DS model. If you don’t miss the sense of community however, and care only about playing, you’ll be more than content. 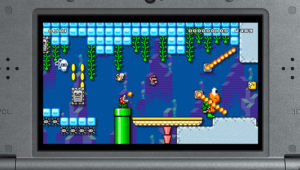 Creating on the 3DS touch screen is just as great as it is on the Wii U (I’d recommend playing on an XL model if possible). Checkpoints are available right out of the gate. The four different Mario styles are accessible right from the get-go, which is awesome! I should note that the NSMBU visuals, though obviously not as good, look fine, even with 3D support curiously absent. The SMW style looks great too, even on my original XL model with its lower CPU. 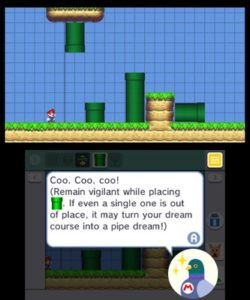 There’s an ease of creative use that can’t be emphasized enough.  There’s no cool idea booklet this time around, but in-game tutorial lessons courtesy of Mary O. and Yamamura are informative and amusing. One of the biggest barriers to creating in SMM 3DS, are the limit of your own imagination. There’s much potential here.

There is an inexplicable omission though, and that’s the lack of amiibo compatibility. No mystery mushrooms to unlock costumes (or event courses) are found in SMM 3DS. I might not even especially care about this if not for the fact that so many of Nintendo’s big 3DS release this year do support amiibo! Nintendo has failed to provide a reason for the omission of amiibo, and it seems clear why… there is no reason. 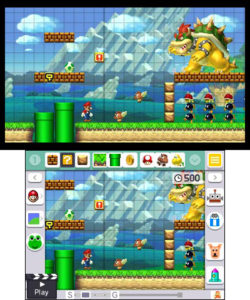 Sharing is the main area where SMM 3DS is flat out unsuccessful compared to its Wii U predecessor, to such a degree that I’m sort of surprised Nintendo has even bothered to advertise it. You cannot upload any courses you design to the Course World. You can’t even start a design on the 3DS and transfer it over to the Wii U to finish and upload. Nintendo has, in effect, crippled any remaining sense of community that was, and remains, such a Mario Maker strength.

Who thinks trading a course with friends via local play – meaning they must also own a copy; no download play – is a proper substitute? At the very least, let me trade with those on my friend list. Heck, you can’t even swap the game card between systems without having to erase everything! There’s a collaborative aspect that Nintendo’s briefly touched on (“Pass a level back and forth with other players to make your dream course.”) but they’ve not really attempted to explain why this might be a compelling feature. 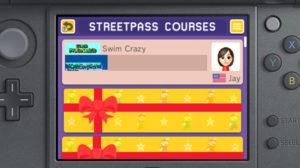 One of the reasons I delayed this review, is that I wanted to see how StreetPass sharing might work. Thanks to weekend travel I hit crowded malls, highway rest plazas, and various Nintendo Zone hotspots. I received a few tags, but sadly no courses. I’m sure that in Japan, StreetPass tags are available in every corner drugstore, but elsewhere, they’re a little hard to come by. My hope is that those who are introduced to the world of Mario Maker through this 3DS port, will enjoy it enough to want to pick up the much fuller Wii U version. 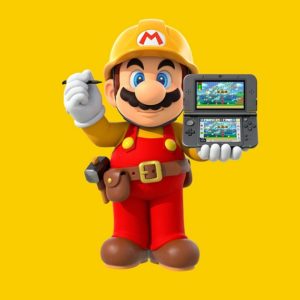 Super Mario Maker for Nintendo 3DS is tricky to score. It’s Wii U predecessor is only a year or so old; I can’t simply stick my head in the sand and ignore how superior it is for sharing courses, and better optimized overall. For those thinking about double dipping, I’d have to say wait for a Nintendo Select price reduction. Or hope for some needed updates; the Wii U game keeps getting updated after all! If you’ve yet to experience the world of Mario Maker, the Wii U should definitely be your first choice. I’m still playing it one year later, and the online community is active and healthy. For all that, if you don’t own a Wii U, and don’t plan on buying one … 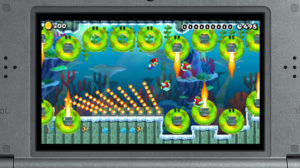 Super Mario Maker for Nintendo 3DS offers a lot. Between Nintendo’s 100 courses, and seemingly no end of Wii U designs, you won’t be left in want for something to play. If sharing holds little interest to you, this should be an easy purchase to flirt with, and it’s $20 cheaper than the Wii U version as well. Mario fans, get ready to play and create anytime, anywhere.

Good ... except for sharing

Mario is such a great character, and Mario Maker such an outstanding game, that even a complacent port still winds up being good. Especially for 3DS players that don’t own a Wii U, this game will be a treat.