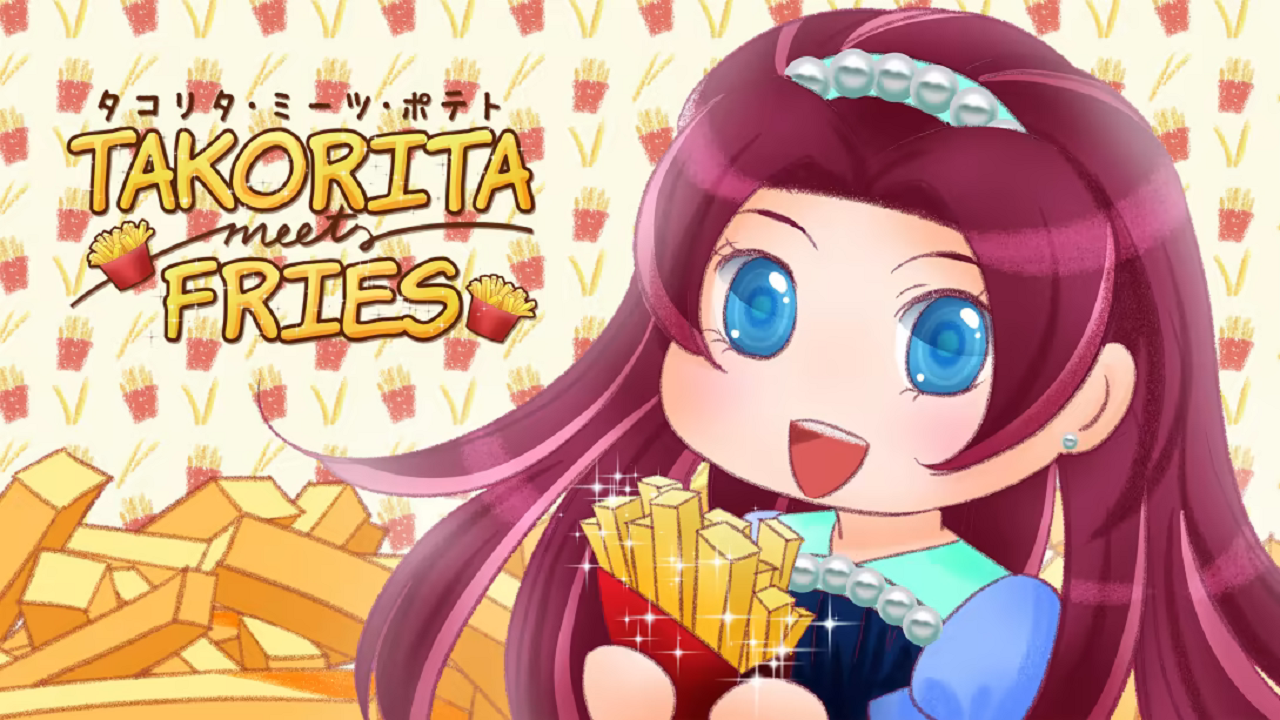 Growing up, I was never a big reader, but I did enjoy Choose Your Own Adventure books. They appealed to me because the choices were meaningful; many resulted in life or death scenarios. And most books had several different endings that encouraged you to go back and pick different paths. Because of this, it would seem that visual novels would be a good fit for me. And when a VN’s done well, they’re very appealing. Unfortunately, Takorita Meets Fries doesn’t fall into this category. It’s a boring story with no meaningful choices, making it difficult to call it even a game.

The protagonist in the story is Princess Takorita, a princess from a kingdom under the sea that finds the food in her kingdom boring and leaves to explore the land to find interesting food. She’s accompanied by Mer, a merman sworn to protect her, even though she’s awful to him. Takorita isn’t a good person, she is spoiled and annoying, and she never really develops as a character. That’s one of the most frustrating aspects of the game. The story has glimmers of the classic hero quest – a character questing for treasure, with characters helping them on their journey, learning about themselves, and returning home with a bigger purpose. But Takorita never grows. She remains annoying and mean to most of the characters helping her throughout her journey. Takorita is not a likeable character, and that makes it difficult to enjoy the story.

The game boasts multiple paths, and while that’s technically true, none of the choices you make are interesting or meaningful. There’s one point in the game that you need to decide which path you’re going to take. But all this does is open a different final ingredient that Takorita finds to add to the french fries she’s making. The game has four different endings or four different french fry dishes that she creates. But after reading about one dish she creates, there’s no real incentive to go through the story to get to the other endings. And if you didn’t save the game when the branch is available (and it’s not intuitive on how to), you’ll need to go through the first three chapters of the story again to get to the decision branch. It feels more like a chore than a game.

It’s hard to know who this game is made for; even with the weak character development, there could be some saving grace to use the game as a way to get young kids to read. Unfortunately, the game tries to be adult by having the characters calling each other “perverts.” I think this is an attempt at some anime-style humor, but the jokes miss the mark. The artwork looks like it should appeal to a younger audience, but the humor doesn’t. And it didn’t have to be this way, as it’s just a scene or two with crude humor. The game has a major identity crisis, and because of this, it falls flat.

The artwork isn’t bad, although it’s a bit one-dimensional, which seems appropriate given the depth of the characters. Some of the characters wear animal costumes, but it’s never really explained why they are wearing those costumes. Again, this would appeal to a much younger audience if this game was truly intended for a younger audience. The one saving grace is the music. It’s not bad, and in some scenes, the music matches the attitude that the character is trying to portray.

It’s too bad Takorita Meets Fries isn’t good. As there are few hero quest stories with female protagonists, Takorita could’ve been great for a younger audience. Unfortunately, Takorita Meets Fries struggles with its identity and who the intended audience is supposed to be. The simplistic story, lack of gameplay, and cartoon artwork might appeal to a much younger crowd. But the crude humor takes away that option.

It’s too bad Takorita Meets Fries isn’t good. As there are few hero quest stories with female protagonists, Takorita could’ve been great for a younger audience. Unfortunately, Takorita Meets Fries struggles with its identity and who the intended audience is supposed to be. The simplistic story, lack of gameplay, and cartoon artwork might appeal to a much younger crowd. But the crude humor takes away that option.