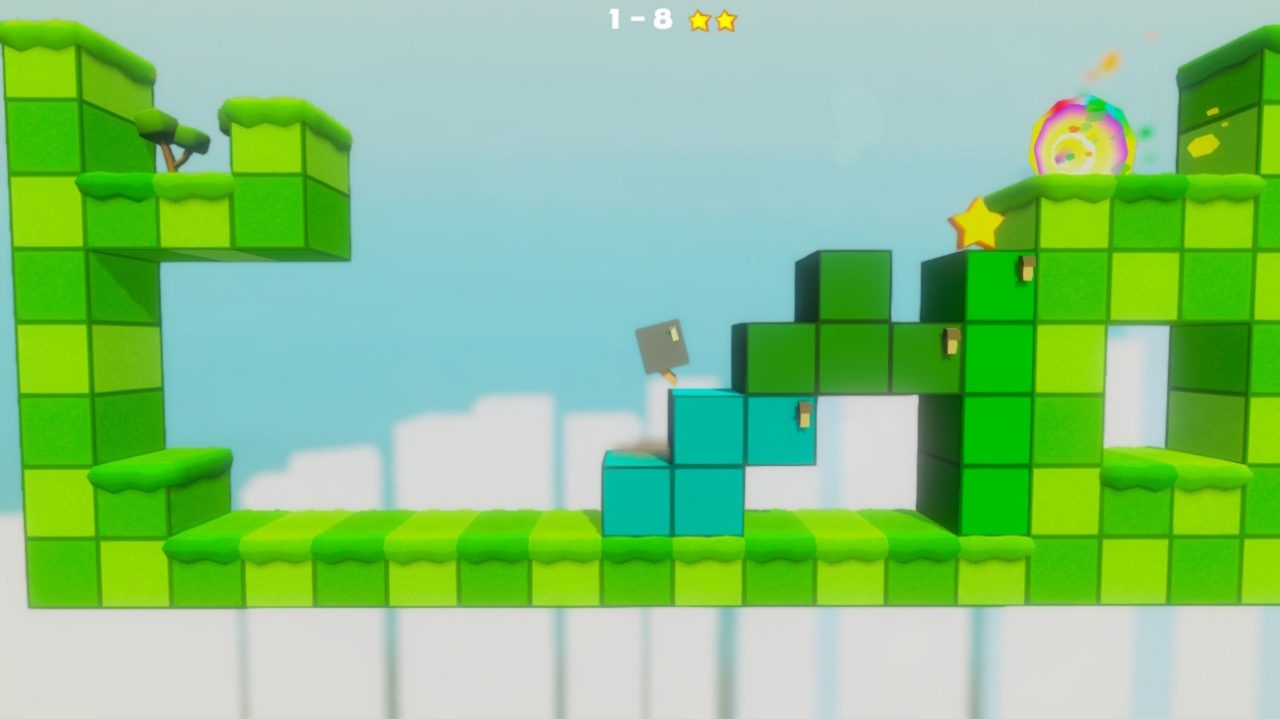 TETRA’s Escape is a puzzle-platformer with solid gameplay but subpar progression. Its linear design handicaps it by making its trial and error gameplay more repetitive than it needs to be. This is still a decent game, especially for fans of this style, but it goes to show you how a single design choice can have a domino effect.

The long initial load time made me wonder if my Switch had frozen, but eventually, I was greeted by a short intro (but no real story). A familiar looking puzzle-platformer layout presents itself, as you control various tetrominoes, not just the title character, and shape-shift across dozens of levels. Reach the exit, collect up to three stars and a trophy, and try to earn achievements. Nothing really out of the ordinary, but established fun within the genre.

However, the linear design will, eventually, drag the experience down. Strangely, the game’s eShop description says “don’t just go expecting a linear adventure”. Make no mistake though, linear progression is what TETRA’s Escape dishes out. The game’s difficulty seems to expand and shrink, and at its peak, you’ll find yourself replaying the same levels often, especially with no undo button for the shapes that act as platforms. This puts gameplay balance at risk, because at what point does the non-linear challenge turn from satisfying to just monotonous? Even a limited option to skip and try a different level within the same world would’ve been most welcomed.

Because of the linear design, I found my attention waning after the first few worlds. The aesthetics didn’t really do much to hold my interest, with decidedly simple graphics and very little background scenery. While visually there’s nothing particular to note, the music is rather nice. It’s low by default for some curious reason, but the options let you adjust it to proper volume so you can hear the pleasant background tunes. I rather liked the tracks that sounded reminiscent to K.K. Slider from Animal Crossing.

TETRA’S Escape tries to put its best foot forward. It’s appropriately priced at just $4.99 while offering extras like solid rumble and statistics. But the linear design keeps what should be a shape-shifting good time firmly in the just decent territory. I really hope it’s patched. Perhaps the inevitable repetition that stems from linear design will bother you much less than it does me? Still, I’d recommend other Ratalaika published games first, like the puzzle-platformer, I and Me.

TETRA’S Escape tries to put its best foot forward. It’s appropriately priced at just $4.99 while offering extras like solid rumble and statistics. But the linear design keeps what should be a shape-shifting good time firmly in the just decent territory.